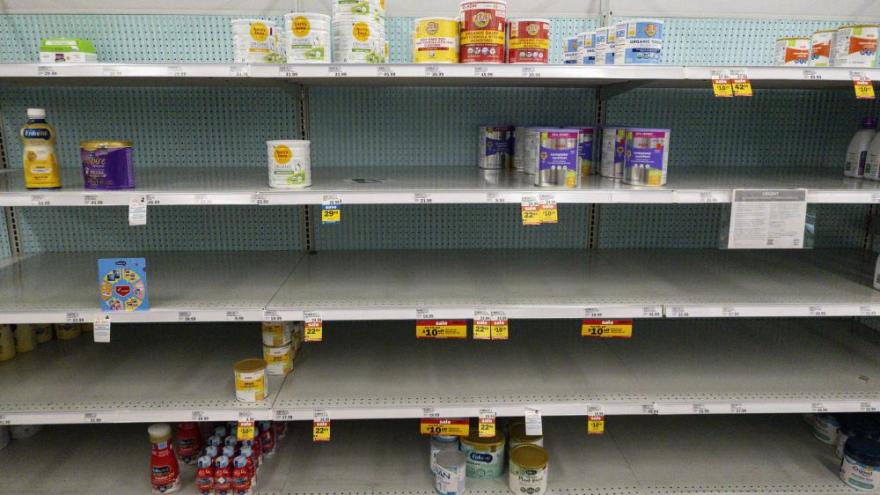 US President Joe Biden will speak with infant formula companies and announce steps to address the shortage.

(CNN) -- The White House is struggling to answer questions about a baby formula shortage in the United States as the scope of the crisis becomes clearer and store shelves remain bare.

After announcing a series of limited steps the Biden administration is taking to address the shortage, White House press secretary Jen Psaki on Thursday could not clearly answer queries from CNN's MJ Lee about the federal government's guidance for concerned parents who cannot find formula to feed their children.

Asked what a parent who doesn't have access to formula or breast milk should do -- whether there is a hotline they can call or if they should head to the hospital, for example -- Psaki said: "I would say those are important public health questions. But ... what I can convey to all of you is what we're doing to address exactly that concern, which is taking every step we can to ensure there is supply on store shelves and we have increased the supply over the last four weeks."

When pressed which government agency such questions would be better directed at and what a parent should do if they can't find formula, Psaki, without naming an agency, said: "We certainly encourage any parent who has concerns about their child's health or well-being to call their doctor or pediatrician."

American stores have had a hard time keeping baby formula in stock for months due to a recall, inflation and supply chain problems. Manufacturers have said they are producing at full capacity, but it's not enough to keep up with demand.

US grocery store shelves had even less infant formula last week than they had the week before, according to a new report from Datasembly, a real-time data tracking agency that gauges how much product is available.

The report, released Tuesday, showed that the out-of-stock rate for baby formula in the US was at 43% for the week ending May 8. It was at 40% during the previous week. By comparison, in the first half of 2021, when the supply of formula was considered stable, the out-of-stock rate was between 2% and 8%. But the rate has been steadily increasing since then. Additional data from the agency found that more than 50% of formula is out of stock in eight states and the District of Columbia. For the week prior, only six states had that level of shortage.

The administration's latest steps to address the shortage include urging states to allow government nutritional assistance recipients more flexibility in the varieties of infant formula they can buy, calling on the Federal Trade Commission and states attorneys general to crack down on price gouging by manufacturers and importing more formula from overseas.

The announcement came after Biden spoke with formula retailers and manufacturers -- including the CEOs of Wal-Mart, Target, Reckitt and Gerber -- to discuss the ongoing crisis.

Specifically, Psaki said, Biden discussed how Reckitt and Gerber have increased production amid a formula recall by Abbott Nutrition. And the conversation with Wal-Mart and Target focused on their work to stock shelves with formula including in rural areas. She also said the new steps come after work that's been going on "for weeks and months now."

Psaki, who was peppered by questions about the shortage during Thursday's briefing, confirmed that the use of the Defense Production Act -- which allows the government more control during emergencies to direct industrial production -- remains on the table. But even though she said the administration's existing efforts have had "success" in increasing production in recent week, Psaki and other Biden officials have declined to predict when store shelves will return to normal.

And while the US Food and Drug Administration said in a statement to CNN that its around-the-clock work with manufacturers should increase supply, the agency did not offer specifics on the timing of the increase.

Abbott Nutrition, which recalled several lots of their formula in February after they were linked to infections in infants, said on Wednesday that its Sturgis, Michigan, plant could be up and running within two weeks, and product could be back on shelves in six to eight weeks, subject to approval by the FDA.

Abbott said it is improving its systems and protocols at the facility and that it is also making upgrades to the plant.

In a call with reporters, a senior administration official said the FDA will announce "very soon" how the US will be able to import more formula from abroad but declined to offer further details.

Previously, the FDA announced other steps to address the shortage, which included working closely with the industry to maximize production capabilities, expediting FDA reviews, expanding hours of operation for manufacturers and calling on retailer groups to consider placing purchase limits on some products to prevent hoarding.

On Thursday, the FDA told CNN that the agency is "doing everything in its power" to make sure there is enough formula available for people who need it, adding that they recognize "that many consumers have been unable to access infant formula and critical medical foods they are accustomed to using and are frustrated by their inability to do so."

The FDA said most manufacturers are producing at normal or even expanded capacity, adding, "It is important that the FDA continue its work to ensure that Abbott can undertake safe resumption of production of infant formula at Abbott Nutrition's Sturgis, Michigan facility, to further alleviate these supply challenges, which remains an important focus."

Pelosi said the issue needs to be addressed by Congress "right now."

"Right now the baby's crying, the baby's hungry -- we need to address it right now," said Pelosi. "And I think we have good focus on it. And we'll see what the President has to say. And we have our proposals as well."

Pelosi said that House Appropriations Chair Rosa DeLauro is taking the lead on the issue in the House.

McConnell issued a statement blasting the administration for its handling of the formula shortage, saying, "This problem has been developing in slow motion for several months now, but the Biden administration has been characteristically sluggish and halting in response."

"The FDA knew about the initial recall. The administration should have foreseen these supply shortages," McConnell continued. "But the Biden administration has been too slow and passive about getting production back up and running. Both Republican and Democratic senators have demanded answers from the administration and gotten none."