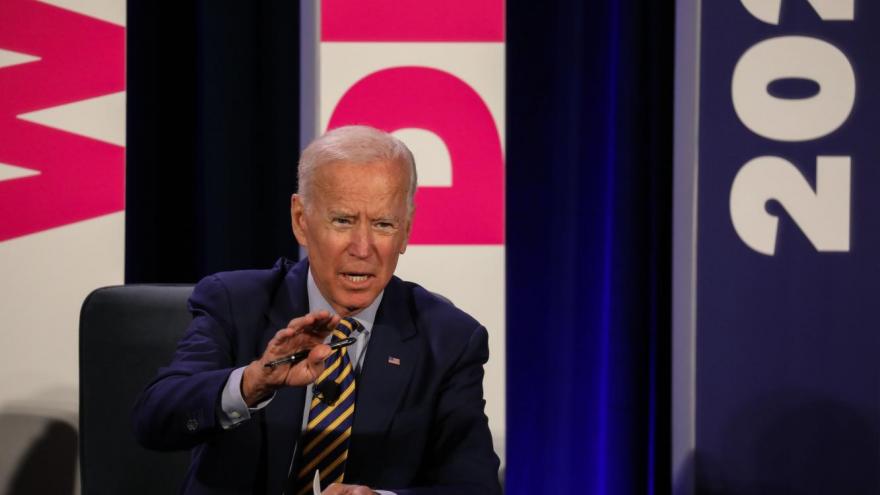 (CNN) -- President Joe Biden signed a presidential memorandum on Thursday to reverse restrictions on abortion access domestically and abroad imposed and expanded by the Trump administration.

The memorandum will "reverse my predecessor's attack on women's health access," Biden told reporters during a signing ceremony in the Oval Office.

He added that the measure "relates to protecting women's health at home and abroad, and it reinstates the changes that were made to Title X and other things making it harder for women to have access to affordable health care as it relates to their reproductive rights."

Biden's move fulfilled a campaign promise to rescind the so-called Mexico City Policy, a ban on US government funding for foreign nonprofits that perform or promote abortions. The Trump administration reinstated the restriction in 2017 by presidential memorandum and then extended it to cover all applicable US global health funding. That made some $9.5 billion in aid for everything from HIV treatment to clean water projects and child immunizations contingent on groups agreeing not to discuss or perform abortions.

The memorandum also directs the Health and Human Services Department to immediately move to consider rescinding the Trump administration rule blocking health care providers in the federally funded Title X family planning program from referring patients for abortions, according to the Biden administration.

Taken together, the actions show an administration receptive to at least the initial requests of advocates eager to codify a new era of abortion protections after the prior administration took restrictions on the procedure to unprecedented levels.

Advocates for abortion restrictions slammed Biden over the announcement, which coincides with the eve of anti-abortion activists holding the annual March for Life event on Friday -- though this year it will be virtual. Former President Donald Trump made history in 2020 by being the first sitting President to participate in the event, which for decades has drawn large crowds of supporters each year to the National Mall.

The policy, also known as the "global gag rule," has been instituted by Republican administrations since President Ronald Reagan and repealed by Democratic ones. A State Department review published last year of the Trump administration's policy to bar funding for foreign nonprofits that perform or promote abortions found it has also affected efforts to treat tuberculosis and HIV/AIDS as well as to deliver nutritional assistance, among other programs, and has had significant impact in sub-Saharan Africa.

Advocates and practitioners like Ouyo say the deaths result from the cuts to health care of all kinds for women, including access to contraception, which sends them in search of illegal, often unsafe and deadly abortions.

"This global gag rule has been one of the most detrimental policies to women's lives, especially women coming from marginalized communities," Ouyu told CNN. "Biden really has a lot to do."

Seema Jalan, executive director of the Universal Access Project and Policy at the United Nations Foundation, said advocates see an opportunity for the Biden administration to work with Congress to make broad changes. She cited the Helms Amendment — which bars US foreign aid for performing or promoting abortion, not just to foreign non-profits, but to governments, multilateral organizations and US non-profits — and the Hyde amendment, which imposes similar restrictions on groups within the US. The policies currently allow for abortions in cases of rape, incest or a threat to the pregnant person's life.

"There's the hard work of the administration working with Congress putting in place permanent solutions to harmful policy: addressing global gag, Helms, Hyde, and other technical fixes that are highly consequential," Jalan said.

Anti-abortion advocates, however, criticized the rollback, arguing it runs counter to Biden's professed efforts to bring the country together.

"Rescinding the Mexico City Policy on the eve of the March for Life is a deeply disturbing move, especially when the President says he wants national unity," March for Life president Jeanne Mancini said Thursday, adding that the government "should work to protect the inherent dignity of all persons, born and unborn."

Biden's memorandum also deals with Title X, a federally-funded program that served about 4 million people a year prior to the abortion referral rule's implementation, according to HHS. The program provides resources including contraception, breast and cervical cancer screenings, and preventive education and testing for sexually transmitted diseases and HIV -- but not abortions.

In 2019, Trump's HHS issued a rule to bar health care providers participating in the program from offering abortion referrals, a policy that opponents argued would hit low-income people, rural residents, communities of color and the uninsured hardest. The rule prompted multiple federal court challenges and was ultimately blocked in federal court. But in July of that year, the 9th US Circuit Court of Appeals allowed the rule to go into effect despite the ongoing challenge against it.

The effects of the rule have been stark. Planned Parenthood — which previously covered 40% of Title X's patients and had been involved with the program since it began, according to the organization — withdrew from the program soon after the 9th Circuit decision. Additional clinics have dropped out of the program since the rule took effect, leaving six states without Title X providers, according to data from the nonpartisan Kaiser Family Foundation. More than 1,000 Title X sub-recipients and sites — approximately 25% of the 4,000 clinics in the program prior to the rule — have withdrawn from the program, per Kaiser.

"During the presidential campaign, Joe Biden made it clear that promoting abortion would be a priority in his administration and it would be done at the expense of taxpayers," Tobias, accusing him of dismantling "domestic protections that have saved countless lives -- and put taxpayer money in the pockets of abortionists."

Biden's memorandum, while a significant change of direction, represents just the beginning of advocates' goals of restoring the program.

"We expect some commitment toward repairing the program, rescinding the rule and getting longstanding providers back into the network so that services can be restored in parts of the country that have gone without Title X funding for so long," said Audrey Sandusky, communications director for the National Family Planning & Reproductive Health Association (NFPRHA).

Around 1.5 million people lost access to Title X coverage after the rule was implemented, according to Sandusky. The group counts nearly three-quarters of Title X grantees among its membership of providers and administrators and worked with the Biden transition team and HHS staff on Title X's future, she said.

In light of how some "patients have been in the dark" after they were no longer able to get free or low cost health care from their usual providers, "I would say it would take a long time for providers to regain the trust and confidence that patients have had in them," Sandusky said, as well as "to regain trust in the federal government and to assure providers that they have support that they need from this administration and from Congress."

In a call with reporters on Wednesday, Planned Parenthood President and CEO Alexis McGill Johnson called rolling back the Mexico City Policy and the Title X abortion referral restriction "a great start, one that will increase access and meaningfully impact people's lives, but I'll emphasize again, this is a start."

When asked about conversations between Planned Parenthood and the Biden administration on Title X, McGill Johnson described "very robust, and I would say, exciting conversations not just about the domestic gag rule but also thinking about how more investments can go into access to family planning and contraception, how to be more inclusive, how we can use policy to also engage men, to engage other populations."

"We need to improve and modernize Title X," McGill Johnson said, later adding, "making sure that it meaningfully reflects the sexual and reproductive health care needs of all patients."

Lawmakers, pointing to data that show the policies result in more unsafe abortions, more unwanted pregnancies, more maternal deaths and have a disproportionate impact on Black and brown women, say they are seizing the moment as well.

Democratic Rep. Rosa DeLauro of Connecticut, chair of the House Appropriations Committee that oversees Title X funding, told CNN in an interview Wednesday that while she had not been in contact with the Biden administration on Title X, she's focused on returning the program to its prior form.

"What I'm committed to in Appropriations, because we have jurisdiction over Title X funding, is to work with the administration and the providers, those who were forced out of the program, to make sure that the funding is there for them to get back in," she said. "Or work in that legislative direction, and to ensure there are safeguards to make sure that we can't have what the Trump administration tried to do here."

When asked if she would seek to increase funding in this legislative session, DeLauro replied, "I'm going to take a look at what we have by way of an allocation and so forth and, if I can, I will work to increase the funding."

Democratic Sen. Jeanne Shaheen of New Hampshire is set to re-introduce on Thursday the Global HER Act, which would permanently repeal the Mexico City Policy. She said it was "shameful" that the Trump administration not only implemented it, but expanded it.

"I'm so relieved that President Biden has made rescinding this policy an early priority," Shaheen told CNN. "The data doesn't lie. We know how detrimental this policy has been -- how it likely contributed to increased maternal deaths, unsafe abortions and compromised access to critical care. Rescinding this rule is the start but it is not enough -- there needs to be a permanent fix."

And in the House, Democratic Rep. Jan Schakowsky of Illinois and others will reintroduce a bill to repeal the Helms Amendment. Also in their sights: the Hyde Amendment.

Access to reproductive health care and abortion, if needed, "is central to women's independence, success and bodily autonomy," Schakowsky told CNN. "If you cannot control reproduction for yourself, then you can never really plan your life."

And some lawmakers, along with reproductive rights groups, are pushing Biden and Vice President Kamala Harris to go further. The Congressional Pro-Choice Caucus is asking Biden to take immediate action on multiple fronts beyond repealing the Mexico City policy and reconsidering the Title X rule, including expanding US foreign assistance support for abortion care, rescinding an executive order that restricts abortion access under the Affordable Care Act, and directing the Health and Human Services Secretary to lift the Food and Drug Administration decision that an over-the-counter medication to safely end early pregnancy cannot be mailed during the pandemic.

Over 90 advocacy groups, including NFPRHA and Planned Parenthood, have presented the Biden administration with a "Blueprint for Sexual and Reproductive Health, Rights and Justice" calling for such actions and others, such as rescinding the Hyde Amendment.

Marcela Howell, president of In Our Own Voice: National Black Women's Reproductive Justice Agenda, which is one of the groups, told reporters Wednesday that lawmakers freely discussing abortion access contributed to their goals.

"The reality is that all of us have been fighting stigma around abortion, and if we cannot get the administration and members of Congress to actually use the word abortion care, then that furthers the stigma," she said. "And we believe that it is a safe and legal procedure that women have accessed at various points in their lives and the stigma around it needs to be eliminated."