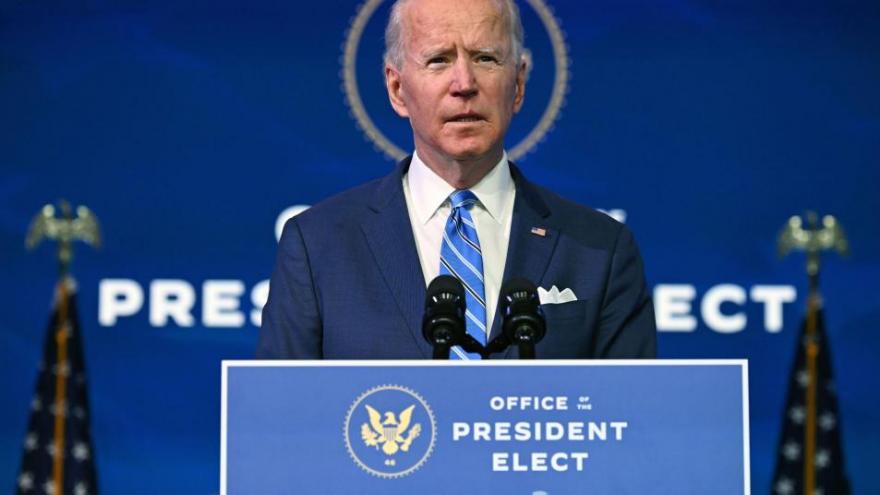 President-elect Joe Biden plans to sign roughly a dozen executive orders, including rejoining the Paris climate accord and ending the travel ban on predominantly Muslim countries, on his first day in office.

(CNN) -- President-elect Joe Biden plans to sign roughly a dozen executive orders, including rejoining the Paris climate accord and ending the travel ban on predominantly Muslim countries, on his first day in office, according to a memo from incoming chief of staff Ron Klain.

He'll also sign orders halting evictions and student loan payments during the coronavirus pandemic and issuing a mask mandate on all federal property in an effort to either roll back moves made by the Trump administration or advance policy in a way that was impossible in the current administration.

One of Biden's most common campaign trail promises was to tackle an issue on his first day in office -- a pledge he usually made to either contrast himself with President Donald Trump or highlight just how important he believed an issue to be. These promises were made on everything from climate change to immigration to foreign policy, and many are reflected in Klain's Saturday memo, which was first reported by the New York Times.

"During the campaign, President-elect Biden pledged to take immediate action to start addressing these crises and build back better," Klain writes. "As president, he will keep those promises and sign dozens of executive orders, presidential memoranda, and directives to Cabinet agencies in fulfillment of the promises he made."

Beyond executive actions in his first days in office, the memo outlines that Biden plans to send Congress a large-scale immigration plan within his first 100 days in office. The plan would offer a pathway to citizenship for the millions of undocumented immigrations currently in the United States.

Biden rolled out his first legislative priority this week, announcing a $1.9 trillion coronavirus relief package that included direct payments to Americans. Biden made clear during a speech on the plan that he wanted it to be the first issue Congress takes up after he is inaugurated on January 20.

The memo makes clear a key part of Biden's overall strategy includes getting Congress to act on his legislative priorities, something Biden ran on by highlighting his relationships with Republicans in the Senate. The focus is an acknowledgment that only so much can be done via executive order.

The day after Biden is inaugurated, according to Klain, he will "sign a number of executive actions to move aggressively to change the course of the COVID-19 crisis and safely re-open schools and businesses, including by taking action to mitigate spread through expanding testing, protecting workers, and establishing clear public health standards."

And on January 22, Biden will direct his Cabinet agencies to "take immediate action to deliver economic relief to working families bearing the brunt of this crisis," Klain writes.

The flurry of action is meant to show Americans that Biden is not wasting any time taking control of the coronavirus -- something the Biden transition has been intently focused on. But the scope and breadth of the topics Biden will address also highlights the extent to which Democrats believe the incoming administration will have to be focused on multiple issues at once to be successful.

From January 25 to February 1, Klain writes that Biden will issue orders on everything from directing his government to buy American products to beginning to fulfill promises to reform the criminal justice system.

During that week-long period, Biden will also order the federal government to determine how to reunite children separated from their families at the US-Mexico border, as well sign additional orders aimed at tackling climate change and expanding access to health care.

"Of course, these actions are just the start of our work," Klain writes. "Much more will need to be done to fight COVID-19, build our economy back better, combat systemic racism and inequality, and address the existential threat of the climate crisis. But by February 1st, America will be moving in the right direction on all four of these challenges — and more — thanks to President-elect Joe Biden's leadership."

Because Biden routinely promised to take action on "Day One" of his administration, hosts of interest groups and advocacy organization have put public pressure on Biden to live up to his promises.

"There is a lot riding on Biden ending the ban on the first day of his presidency because this is something he has campaigned on," said Iman Awad, national legislative director of Emgage Action, an advocacy organization for Muslim Americans. "With that, we understand that we are facing so much during this political moment: A current president making this transition nearly impossible, the insurrection, and the pandemic. Nevertheless, Muslim American communities are hopeful that the Biden Administration will fulfill that promise, despite the crises happening."

For climate change activists, Biden's promise to take swift action on an array of climate issues was a key part of why progressives rallied around Biden once he cleared the Democratic field, said Jared Leopold, co-founder of Evergreen Action, a group of former staffers to Washington Gov. Jay Inslee, who ran for president in 2020 focused almost entirely on climate change.

"Taking over the presidency from Donald Trump is like taking over the lease from a frat house: The cleanup task list is staggering," Leopold said. "The task for Biden is two-fold: first, clean up Trump's damage, then take action on the bold climate plan that science demands. Biden ran on the strongest climate plan in American history, and he has a clear mandate to enact it immediately by executive and legislative action."

And LGBTQ activists, like Human Rights Campaign President Alphonso David, said it is critical for Biden to show clearly at the outset of his administration that he is committed to rewriting actions taken by the Trump administration.

"I do expect that the Biden-Harris administration will take affirmative steps within the first day or so of taking office to satisfy their campaign pledges," David said in an interview with CNN, highlighting the need to "ensure that the rights of LGBTQ students are enforced under Title IX."

"My goal is to make sure that the civil rights of LGBTQ people are protected, that Joe Biden meets his campaign promises and fulfills his campaign promises to the community," said David. "And all of my expectations lead me to conclude and based on conversations that I've had, that they are going to be taking those steps to make sure that they meet their campaign obligations and promises."