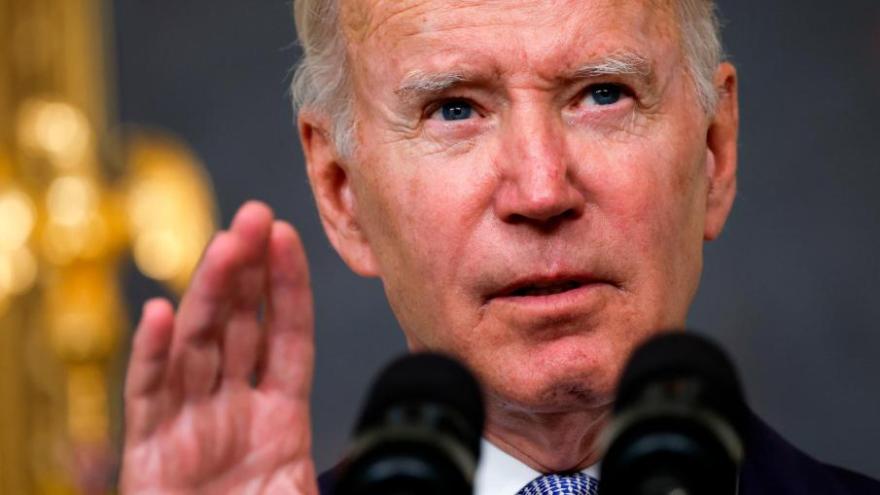 President Joe Biden signs the PACT Act into law at the White House on Wednesday - legislation aimed at expanding healthcare benefits for veterans and addressing exposure to toxic chemicals.

(CNN) -- President Joe Biden on Wednesday signed into law a bill expanding health care benefits to millions of veterans who were exposed to toxic burn pits during their military service.

The bill is a major bipartisan victory for Congress and addresses an issue that is personal to the President. Biden has said he believes there may have been a connection between the brain cancer that killed his 46-year-old son, Beau Biden, and the burn pits Beau was exposed to during his military service.

Burn pits were commonly used to burn waste -- including trash, munitions, hazardous material and chemical compounds -- at military sites throughout Iraq and Afghanistan until about 2010. These massive open-air burn pits, which were often operated at or near military bases, released dangerous toxins into the air that, upon exposure, may have caused short- and long-term health conditions, according to the Department of Veterans Affairs.

"Toxic smoke, thick with poison spreading through the air and into the lungs of our troops. When they came home many of the fittest and best warriors that we sent to war were not the same. Headaches, numbness, dizziness, cancer. My son Beau was one of them," Biden said.

Beau Biden was an Iraq war veteran who served as the attorney general of Delaware and died of brain cancer in 2015.

The bill adds conditions related to burn pit and toxic exposure, including hypertension, to the Department of Veterans Affairs list of illnesses that have been incurred or exacerbated during military service, removing the burden for veterans to prove that their toxic exposure resulted in these conditions. It could provide coverage for up to 3.5 million toxic-exposed veterans.

"I was going to get this done come Hell or high water," Biden said, calling the legislation "the most significant law our nation has ever passed to help millions of veterans who are exposed to toxic substances during their military services."

The President said, "We have many obligations and only one truly sacred obligation: To equip those we send into harm's way and to care for them and their families when they come home."

"To us and to many of you in the room, if not all of you, it's personal. Personal for so many people like Danielle and Brielle. Sergeant First Class Heath Robinson, just 39 years old. ... They held his hand for the last time at age 39," Biden said.

Biden thanked comedian and political activist Jon Stewart, who has been a lead advocate for veterans on the issue and was at the White House for the bill signing.

The White House is hailing the legislation, known as the PACT Act, as the most significant expansion of benefits and services for veterans exposed to toxins in more than 30 years.

The bipartisan bill passed Congress last week after Republicans, who had previously supported the measure, temporarily blocked the bill from advancing while they sought to add cost-controlling amendments to the package. Republicans' surprise move sparked swift backlash among veterans and veterans' groups, and advocates for the measure protested on the US Capitol steps for days.