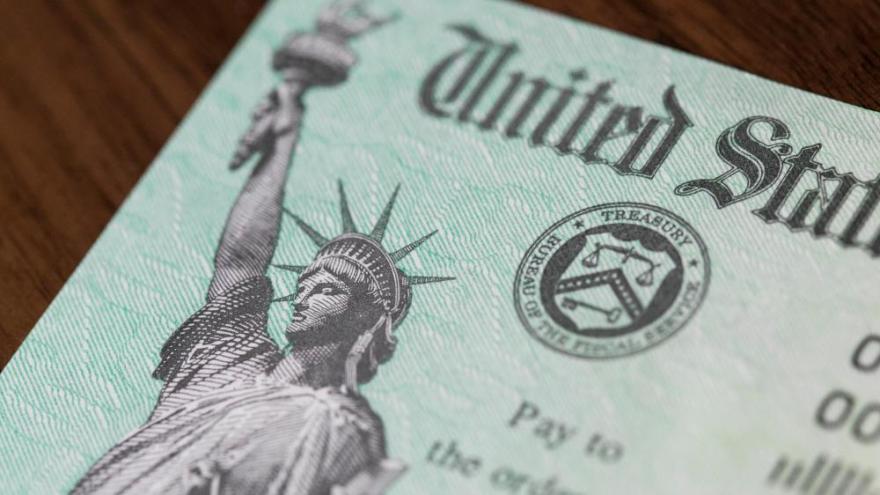 President-elect Joe Biden is expected to put $2,000 stimulus payment back into play. An arranged photograph of a United States Federal Government Coronavirus stimulus check in Silver Spring, Maryland on May 24, 2020.

(CNN) -- A $2,000 stimulus check will be at the heart of a $2 trillion Covid relief plan that President-elect Joe Biden is set to unveil Thursday evening.

An economic package passed by Congress in December provided for fresh $600 stimulus payments despite calls from politicians on both sides of the aisle for bigger checks. Biden's plan calls for adding up to $1,400 to the payments -- totaling $2,000 for those eligible, according to a fact sheet provided by the administration on Thursday.

Congress included payments of $1,200 in its initial stimulus when shutdowns because of the coronavirus began last spring.

Vermont Independent Sen. Bernie Sanders and Missouri Republican Sen. Josh Hawley both pushed to increase the amount of the new payments, and President Donald Trump also came out in support of $2,000 checks -- though he adopted that stance after leaving negotiations up to lawmakers and his Treasury Secretary Steven Mnuchin. Trump stalled signing the bill over the issue but ultimately signed it into law.

Current Senate Majority Leader Mitch McConnell rejected a standalone bill on increasing the value of the checks, but with Democrats about to take control of the chamber -- and of Congress -- following victories in two Georgia Senate runoff elections, Biden will likely have the votes to approve increased relief spending.

Senate Democratic leader Chuck Schumer of New York has said that one of the first bills he'd like to pass once he becomes Senate majority leader would raise stimulus payments to $2,000.

How much will recipients actually get?

Those eligible for the stimulus payments could receive up to $1,400 that would top off the $600 payments that began going out earlier this month. In a letter to his Democratic colleagues sent this week, Schumer indicated that he is planning on payments that would increase the total payout to $2,000.

"Democrats wanted to do much more in the last bill and promised to do more, if given the opportunity, to increase direct payments to a total of $2,000," he wrote.

The payments start phasing out for people making more money, at a rate of $5 per $100 of additional income. They phase out entirely at $87,000 for single filers without children and $174,000 for those married filing jointly without children, according to an analysis by the Tax Foundation.

During the first round, the federal government sent $1,200 payments to eligible Americans. They were mostly sent out between April and August.