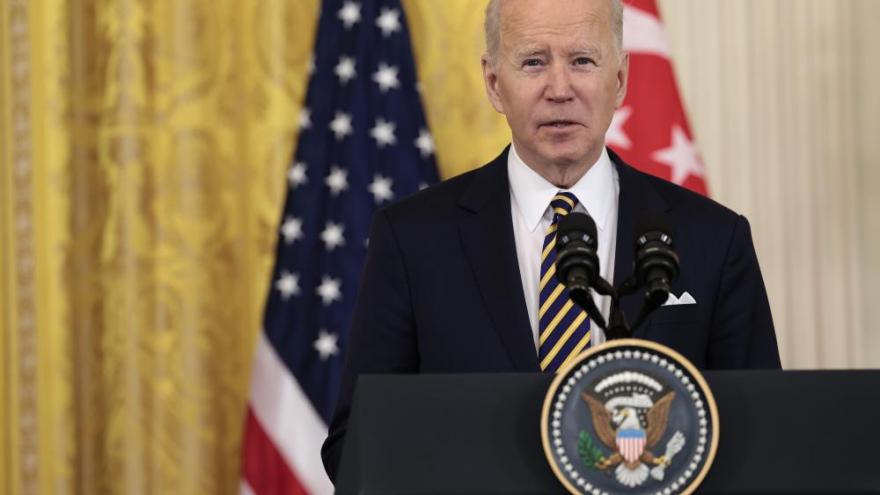 President Joe Biden, seen here at the White House on March 29, in Washington, DC, will mark Transgender Day of Visibility with new measures in support of transgender Americans.

(CNN) -- "Jeopardy!" champion Amy Schneider visited the White House on Thursday to mark the International Transgender Day of Visibility as the Biden administration rolled out a series of measures in support of transgender Americans.

"The more that people like me can be seen, the harder it is to sustain the myths that are kind of driving a lot of this hate and fear," Schneider, the first trans woman to qualify for the "Jeopardy!" Tournament of Champions, said from the White House briefing room.

Her visit -- which included a discussion about transgender visibility with second gentleman Doug Emhoff -- capped a busy day in Washington that saw the administration announce a slew of actions aimed at supporting the mental health of transgender children, removing barriers to entry for government services for trans Americans and improving data representation for transgender people.

"Transgender people are some of the bravest Americans I know, and our Nation and the world are stronger, more vibrant, and more prosperous because of them. To transgender Americans of all ages, I want you to know that you are so brave. You belong. I have your back," the President said in a presidential proclamation Wednesday evening.

International Transgender Day of Visibility aims to celebrate the achievements of transgender rights activists and to increase awareness of ongoing challenges transgender and gender-nonconforming people ​face.

US citizens will have the option to select "X" when identifying their gender on US passport applications starting in April and on other documents, Secretary of State Antony Blinken said Thursday.

"Starting on April 11, US citizens will be able to select an X as their gender marker on their US passport application, and the option will become available for other forms of documentation next year," Blinken said in a statement.

"After thoughtful consideration of the research conducted and feedback from community members, we concluded that the definition of the X gender marker on State Department public forms will be 'Unspecified or another gender identity.' This definition is respectful of individuals' privacy while advancing inclusion."

The administration also announced it would partner with airlines, the Transportation Security Administration and the Department of Homeland Security to add "X" gender markers to their systems.

Additionally, the Social Security Administration will remove the requirement that transgender people show proof of identity or doctor's notes to update their gender information starting in 2022, and new steps from the Equal Employment Opportunity Commission and FAFSA (Free Application for Federal Student Aid) will allow trans individuals to indicate their gender identity -- removing barriers to self-identification they may face in the employment and student loan process.

The administration also announced new steps to ensure equality in data, including $10 million in funding to research best practices for the Census Bureau's American Community Survey.

And the Department of Health and Human Services, the Department of Education and The Substance Abuse and Mental Health Services Administration will release new materials aimed at addressing challenges transgender youth may face in schools and in mental health care.

"On this Transgender Day of Visibility, we honor transgender people who are fighting for freedom, equality, dignity, and respect," Biden said in his proclamation Wednesday. "We also celebrate the parents, teachers, coaches, doctors, and other allies who affirm the identities of their transgender children and help these young people reach their potential."

Transgender Day of Visibility, or TDOV, was founded in 2009 by Rachel Crandall, a Michigan-based transgender activist and the executive director of Transgender Michigan. It was started as a day of awareness to celebrate the successes of transgender and gender-nonconforming people and is an important day for the LGBTQ community.

While the Transgender Day of Remembrance is held every year on November 20 to memorialize the transgender people who have lost their lives as a result of anti-transgender violence, TDOV is a day dedicated to honor and empower the lives of transgender and nonbinary people.

Beyond Schneider's visit, the White House held a series of events, including a conversation with transgender youth and advocates from throughout the country hosted by the second gentleman and Assistant Secretary for Health Rachel Levine. And Education Secretary Miguel Cardona traveled to Orlando, Florida, to discuss the state's controversial legislation that opponents have dubbed the "Don't Say Gay" law with LGBTQ students.

The Department of Health and Human Services also flew a transgender pride flag to mark the day -- the first time in history a federal agency has done so.

The administration's efforts come against the backdrop of a larger movement by conservative lawmakers to impose restrictions on the lives of transgender youth in the US.

This month, Republican Gov. Doug Ducey of Arizona signed two bills into law targeting transgender youth in the state, including one that restricts access to gender-affirming health care for minors, while a controversial order in Texas sought to investigate gender-affirming care of minors as "child abuse."

On Thursday, the Justice Department sent a letter to state attorneys general reminding them of the federal rights that transgender youth have, including seeking gender-affirming care.

"All persons should be free to access the services, programs, and activities supported by federal financial assistance without fear that they might face unlawful discrimination for doing so," the letter said.

Kristen Clarke, the head of the DOJ civil rights division, said in a statement Thursday, "The Department of Justice is committed to ensuring that all children are able to live free from discrimination, abuse and harassment."

The letter, she said, "reaffirms state and local officials' obligation to ensure that their laws and policies do not undermine or harm the health and safety of children," regardless of their gender identity.

"In the past year, hundreds of anti-transgender bills in States were proposed across America, most of them targeting transgender kids. The onslaught has continued this year. These bills are wrong," Biden's Wednesday proclamation said.

"Efforts to criminalize supportive medical care for transgender kids, to ban transgender children from playing sports, and to outlaw discussing LGBTQI+ people in schools undermine their humanity and corrode our Nation's values."

This headline and story have been updated with additional information Thursday.