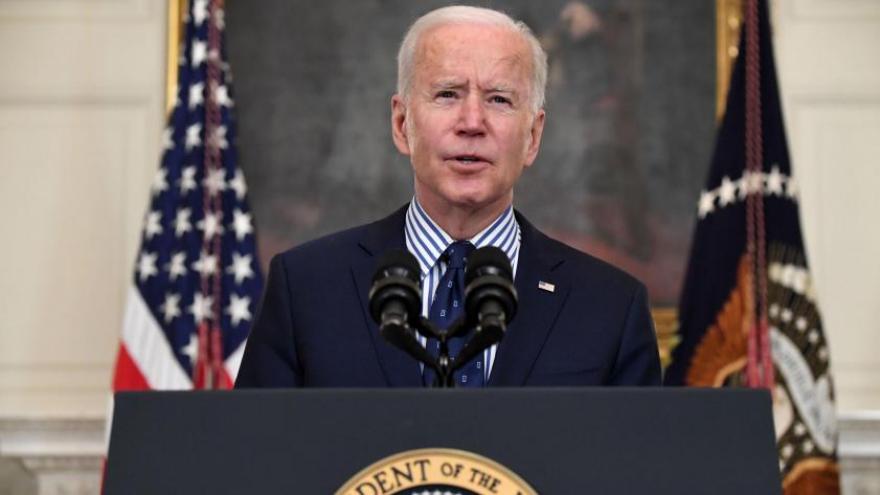 President Joe Biden will deliver his first primetime address March 11, commemorating the milestone of one year since the global pandemic coronavirus shut down much of the nation.

(CNN) -- President Joe Biden will deliver his first primetime address this Thursday, commemorating the milestone of one year since the global pandemic coronavirus shut down much of the nation.

"The President will deliver his first primetime address to commemorate the one-year anniversary of the Covid-19 shutdown on Thursday. He will discuss the many sacrifices the American people have made over the last year and the grave loss communities and families across the country have suffered," White House press secretary Jen Psaki said at Monday's briefing.

She said Biden looks forward to "highlighting the role that Americans will play in beating the virus and moving the country toward getting back to normal."

Then-President Donald Trump addressed the nation from the Oval Office on March 11, 2020, hours after the World Health Organization declared coronavirus a global pandemic.

Trump announced at the time that he was "marshaling the full power of the federal government" to confront the growing public health crisis, including a monthlong halt in travel from Europe to the United States. It came days after he signed an $8.3 billion emergency spending bill aimed at fighting the virus, which Trump described as a "foreign virus."

One year later, more than 29 million Americans have been diagnosed with Covid-19 and 525,000 Americans have died, and the resulting shutdowns have rocked the US economy, with 6.2% unemployment.

Biden's address will also likely come after he is expected to sign into law his top legislative priority of a $1.9 trillion stimulus package to deal with the ongoing impacts of the virus, pending passage in the House this week.

Psaki said the White House isn't taking its passage for granted, however.

Officials will continue to engage with members on Capitol Hill, Psaki said.

"Our legislative team, led by Steve Ricchetti and Louisa Terrell, are certainly not taking anything for granted. They're picking up the phone, checking in with offices, making sure they have their questions answered. They're asking the President, the vice president, Ron Klain, other senior members of the administration to make calls as needed," she said.

The bill was passed by the Senate on Saturday afternoon along party lines after the overnight vote-a-rama.

This week's expected House vote serves as a test for Speaker Nancy Pelosi to keep her party together despite some concerns from progressives on unemployment insurance and minimum wage.