Biden to make final decision on attorney general, with new arguments for Yates and Garland 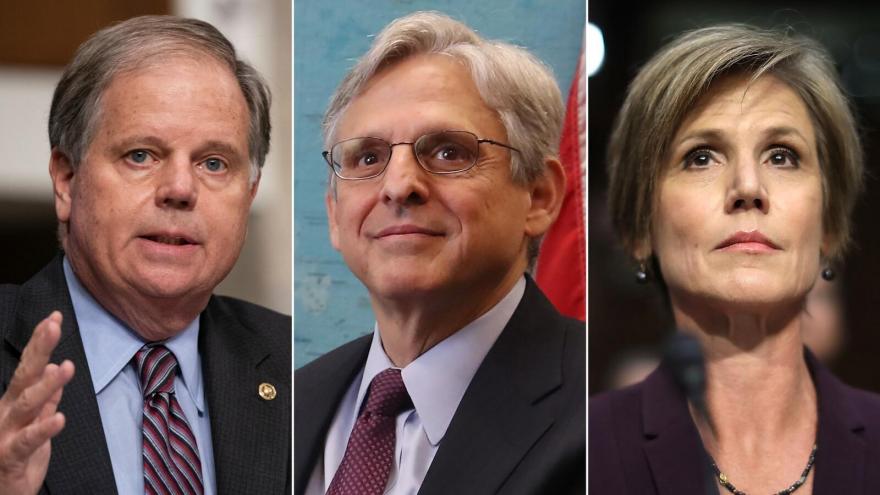 From left: Sen. Doug Jones, Judge Merrick Garland and Sally Yates. President-elect Joe Biden is expected to make his final decision on his pick for attorney general, with new arguments for Yates and Garland.

(CNN) -- President-elect Joe Biden is poised to make a final decision in the coming days on his pick for attorney general, a choice that suddenly comes amid a growing sense of optimism from Democrats that their party will control the Senate and will be able to easily confirm the incoming president's Cabinet nominations.

CNN projected early Wednesday that Rev. Raphael Warnock, a Democrat, will win one of those races, with control of the US Senate dependent on the outcome of the contest between Democrat Jon Ossoff and Republican David Perdue, which Ossoff was narrowly leading.

Yates has deep experience within the department, and President Donald Trump's dismissal of her in 2017 after she refused to defend his travel ban in court made her a hero to many Democrats. Yates spoke at the Democratic National Convention in August.

Her involvement in the investigation into Trump campaign's alleged ties to Russia had made her a target of Trump and top Republicans, making a confirmation in a GOP-controlled Senate difficult.

"She would instantly be a top contender if Democrats win control of the Senate," a person close to the process tells CNN.

Yet it's not only Yates whose star has dramatically risen overnight, a top Biden ally tells CNN, with the Georgia races also potentially benefiting Garland's prospects.

For nearly two months inside Biden's transition, one of the biggest arguments against selecting Garland has been the vacancy it would create on the US Court of Appeals for the District of Columbia. If Republicans retained control of the Senate, the chances of confirming a replacement were low, given Senate Majority Leader Mitch McConnell's penchant to block judicial nominees.

The Georgia Senate races do little to ease another complicating factor: the federal investigation into the business dealings of Hunter Biden, the President-elect's son. The next attorney general could be faced with pressure on whether to name a special prosecutor in the case.

Defenders of Garland say he would be a particularly strong choice to lead the Justice Department in the post-Trump era because he is seen as above reproach of partisan politics. Some allies describe him as a "Boy Scout," which is intended to suggest he would be seen as a non-political figure.

Jones also has strong proponents -- not to mention a longtime friendship with Biden. But he was also seen as one of the easiest to confirm, given that he just left his Senate seat.

Today, one top Biden ally sums up the choice of attorney general, the most important remaining decision in his Cabinet, like this: "It's not back to the drawing board, but it allows this decision to be made in a whole new light."