Biden to Kabul attackers: 'We will hunt you down and make you pay' 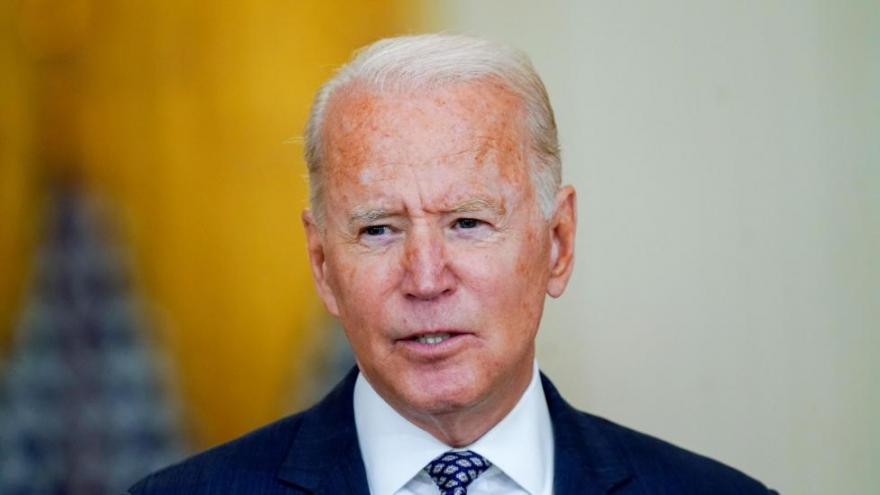 President Joe Biden was attending a pre-scheduled meeting of his national security team at the White House when reports of the Kabul Airport attack reached Washington.

(CNN) -- President Joe Biden vowed Thursday to retaliate for a terrorist attack that killed a dozen US service members outside Kabul's international airport even as he said the frantic mission to airlift Americans from Afghanistan would continue.

"We will not forgive. We will not forget. We will hunt you down and make you pay," Biden said in early evening remarks from the White House, hours after the Pentagon said 12 service members had been killed in two separate suicide blasts outside the airport gates.

In a subdued but firm tone, Biden said he's asked the US military for options to respond to the explosions, which he said had been carried out by the Islamic State affiliate operating in Afghanistan.

"We will respond with force and precision at our time, at the place we choose and the moment of our choosing," Biden said. "Here's what you need to know: These ISIS terrorists will not win."

The terror attacks, which came after days of public and private warnings from Biden of a potential threat that could disrupt the massive airlift effort, have complicated the bloody final days of America's longest war.

Now, in addition to evacuating thousands of people who desperately want to leave Afghanistan, Biden has tasked the military with another mission: hunting down and punishing the ISIS terrorists who killed the Americans and scores of Afghan civilians.

They must conduct both missions under the very present threat of further attacks, which military leaders said earlier could come in vehicles or by rocket.

Biden pledged on Thursday to continue the airlift, which he still says will conclude by next Tuesday, a self-imposed deadline for withdrawing all US troops from the country. He said terror attacks are a principal reason he's sought to limit the duration of the evacuation mission.

Earlier in his remarks, Biden said the attack was one "we've been talking about, worried about" over the past days.

"We're outraged as well as heartbroken," said the President, who cleared his schedule after the attack to huddle with advisers for most of the day.

"The situation on the ground is still evolving and I'm constantly being updated," he said.

Central Command chief Gen. Frank McKenzie said during an afternoon briefing that in addition to the dozen Americans dead, 15 US service members were wounded in the attacks and ensuing gunfights. He warned additional attacks from ISIS were still likely, including using vehicles or rockets.

"We thought this would happen sooner or later," McKenzie said.

The explosions laid bare the risks to US troops and diplomats Biden has warned about for a week as a frantic evacuation effort at the airport gained speed. The pace of evacuations has slowed over the past two days as the security situation deteriorated, and a number of western nations said their evacuation efforts were now over.

The Pentagon said Thursday that despite the attack, flights were continuing to take Americans and others out of the country.

"Despite this attack, we are continuing the mission," McKenzie said.

He also said the US was prepared to retaliate for the killings -- the first hostile action deaths in Afghanistan since February 2020.

Over the past days, the risks of a terror attack at the airport seemed to grow by the hour. The extremely high threat from ISIS caused the US, along with the UK and Australia, to warn people to move away from the airport gates late Wednesday eastern time.

The risk of potential terror attacks from the Islamic State affiliate operating in Afghanistan worried American and Western officials from nearly the moment it became clear that the Taliban would take over the country on August 15.

Once crowds began massing at the Hamid Karzai International Airport, the fear among officials monitoring the situation became acute of an attack meant to create mayhem and fear among those trying to escape the country.

That is what happened on Thursday. McKenzie said he suspected the suicide bomber was being searched by American servicemen at the airport before detonating the explosive.

The attacks quickly consumed Biden's schedule. He was in the basement Situation Room with US Defense Secretary Lloyd Austin, Secretary of State Antony Blinken and Joint Chiefs Chairman Gen. Mark Milley for a pre-scheduled briefing when first word of the blasts arrived.

Vice President Kamala Harris also took part in the meeting via video conference while she was in the air traveling between Vietnam and Guam. She canceled a planned campaign appearance in California, and will instead return to Washington.

As the scale of the attack became clear, the President's schedule was cleared, including a meeting with visiting Israeli Prime Minister Naftali Bennett that was rescheduled for Friday.

After Biden's meeting with his national security team concluded, he continued to be briefed in the Oval Office, according to the White House. The White House press briefing, initially scheduled for 12:00 p.m. ET, was delayed and the President's virtual meeting with governors on Afghan refugees, which was scheduled for 3 p.m. ET, was been canceled.

Biden had raised the possibility of an attack — not from the Taliban, but from the ISIS group — last Friday.

"We're also keeping a close watch on any potential terrorist threat at or around the airport, including from the ISIS affiliates in Afghanistan who were released from prison when the prisons were emptied," he said.

On Tuesday, explaining his decision to stick with an August 31 deadline for withdrawing all US troops from the country, Biden offered a more dire picture of the security threat.

"The longer we stay, starting with the acute and growing risk of an attack by a terrorist group known as ISIS-K, an ISIS affiliate in Afghanistan -- which is the sworn enemy of the Taliban as well -- every day we're on the ground is another day we know that ISIS-K is seeking to target the airport and attack both US and allied forces and innocent civilians," Biden said.

This story and headline have been updated with remarks from President Joe Biden.