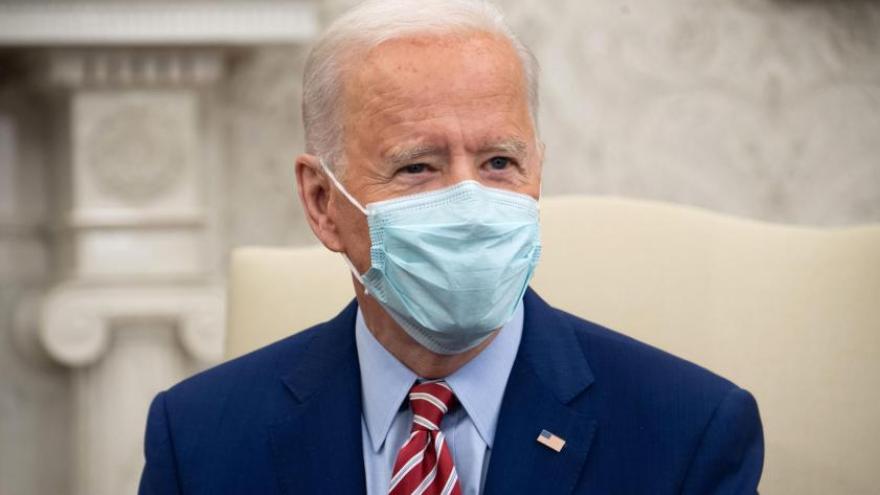 President Joe Biden will participate in a virtual G7 event on Friday where he plans to discuss efforts to combat the Covid-19 pandemic and rebuild the world economy.

(CNN) -- President Joe Biden will participate in a virtual G7 event on Friday where he plans to discuss efforts to combat the Covid-19 pandemic and rebuild the world economy.

It's his first meeting with leaders from the Group of Seven nations as president and represents a departure from former President Donald Trump's handling of the pandemic and global relations.

He'll specifically focus on areas including "coordination on vaccine production, distribution, and supplies, as well as continued efforts to mobilize and cooperate against the threat of emerging infectious diseases by building country capacity and establishing health security financing," a White House statement released Sunday evening said.

When it comes to rebuilding an economy badly battered by the pandemic, Biden is set to focus on "the importance of all industrialized countries maintaining economic support for the recovery," the statement said.

The virtual meeting, hosted by the United Kingdom, will also include leaders of Canada, France, Germany, Japan, the European Commission and European Council.

British Prime Minister Boris Johnson said in a statement this weekend he will use the virtual event to call for global cooperation in the battle against the "common foe" of coronavirus. Johnson will charge the leaders to "work together on a joined-up global approach to pandemics that brings an end to the nationalist and divisive politics that marred the initial response to coronavirus," the statement said.

"Quantum leaps in science have given us the vaccines we need to end this pandemic for good. Now world governments have a responsibility to work together to put those vaccines to the best possible use. I hope 2021 will be remembered as the year humanity worked together like never before to defeat a common foe," Johnson said.

Even as global Covid-19 cases have declined in recent weeks, the virtual meeting comes as new variants are threatening to throw a wrench in government vaccination plans.

Biden's vow to coordinate with other governments on the pandemic and global economy offers yet another break with Trump's approach to foreign policy.

As the pandemic surged globally last May, Trump announced he was postponing the summit, "because I don't feel as a G7 it probably represents what's going on in the world."

"It's a very outdated group of countries," he told reporters aboard Air Force One at the time.

Throughout his term, Trump publicly questioned and denigrated the value of the US' most longstanding alliances, including with NATO, Germany, South Korea and Japan. The former President also pulled the US from the Iran nuclear deal, the Paris climate accord, the World Health Organization and a slew of other United Nations agencies.

On his first day in office, Biden reversed several of Trump's attempts to withdraw from international agreements, beginning the process of rejoining the Paris climate accord and halting the departure from the World Health Organization.

In remarks at the State Department earlier this month, Biden declared that "diplomacy is back at the center" of US foreign policy as he vowed to "rebuild" US alliances worldwide.

However, Biden's foreign policy to-do list is long. In the past four years, tensions with China and Iran have grown, Russia has gone rogue, North Korea has become a greater nuclear threat and relationships with allies have been damaged.