Biden touts gender parity and diversity of his Cabinet 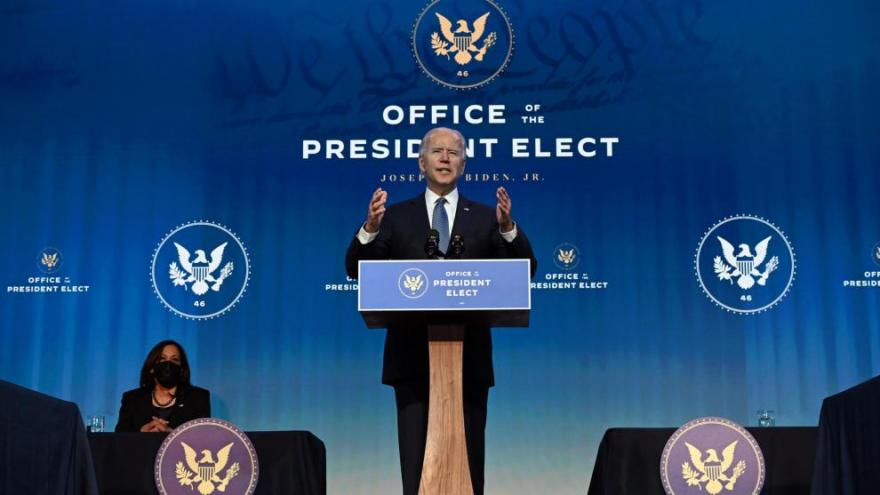 President-elect Joe Biden, seen here on Jan. 7, will introduce his nominees for commerce and labor secretary and other members of his economic and jobs team on Jan. 8.

The two picks mark the completion of Biden's announcements for his Cabinet secretary nominees, and come less than two weeks from the President-elect's inauguration.

Biden touted the diversity and historic firsts in his Cabinet, and said he had fulfilled his promise of having his Cabinet look like America.

Biden spoke of the challenges his administration will face when he takes office in the middle of a pandemic and economic downturn, when so many Americans have lost their jobs and are struggling financially.

Biden said his administration would prioritize distributing emergency economic aid to "small businesses on Main Street that aren't wealthy and well connected, that are facing real economic hardships through no fault of their own." He said he would focus on supporting Black, Latino, Asian, Native American and women-owned small businesses.

The President-elect stressed that Americans and small businesses struggling amid the pandemic need immediate and direct economic relief, including $2,000 stimulus checks.

"$600 is simply not enough, when you have to choose between paying rent, putting food on the table, keeping the lights on," Biden said of the stimulus checks that were recently approved by Congress.

He sympathized with Americans across the country who have lost their jobs and are now forced to line up at food banks to feed their families. He pointed out that the gap between White unemployment and Black and Latino unemployment "remains much too large."

In the wake of the two Democratic US Senate wins in Georgia, the President-elect said he hoped that having Democrats controlling both the House and the Senate will increase the changes of raising the minimum wage.

During a Q&A after he introduced the nominees, Biden said President Donald Trump's decision to skip his inauguration is "one of the few things he and I have ever agreed on."

Here are key lines from the nominees, who will all require Senate confirmation:

"When I announced my run for governor, Rhode Island was in the midst of an eight-month streak as the state with the highest unemployment rate in the nation. But over the last six years, we've worked hard, we fought back and we've grown our way back, achieving a record number of jobs and the lowest unemployment rate in over 30 years."

"I am excited to get to work on a national scale to help realize the vision of the President-elect and Vice President-elect to help more hardworking families in every community write the next chapter of their own American stories."

"Today, we're at a crossroads in America. It's a time of great hardship. Working people are holding their country together. I've seen it up close as mayor of the city that I love, Boston. Health care workers, first responders, grocery store workers, delivery drivers, postal workers, sanitation workers, custodians. Coming through for us under impossible conditions."

"Working people have been struggling for a long time under the erosion of their rights and the deep inequities of race, gender and class. For the last four years they've been under assault, attacks on their rights, their livelihoods and the unions that built the middle class. We are facing hard times but nobody's tougher than the American worker, and now, now we have the opportunity to put power back in the hands of working people all across this country."

"I'm honored to return to the SBA at a crossroads moment for small businesses, the dreams they embody, the people they lift up and the communities they serve. So many small businesses across the country have been devastated by the pandemic and economic crisis. A disproportionate impact has fallen, as it often does, on our businesses owned by people of color."

"Small businesses have had to adapt quickly to survive and chase down relief while facing closures, drops in revenues, shrinking cash flow and increasing debt. I know you believe wholeheartedly, Mr. President-elect and Madam Vice President-elect, that all of our small businesses are critical to our collective success as a nation."

"I've spent my career -- in government, the private sector and nonprofits -- finding ways to ensure that economic opportunity is inclusive and broad-based. And as it is for all of us in our own ways, it's personal. I come from a long line of small business owners, including one who owned and operated the only African American-owned hotel in the mid to late 1800s just four short blocks from where the Commerce Department sits today."

"But for too many people in this country, the chance to start and grow a business, to take their idea into market and sell all over the world remains elusive all these years later. But we also know that government, its resources and its experienced and capable civil servants can help level the playing field and empower people, communities and our economy to reach their full potential."

Raimondo is the first woman governor of Rhode Island, and has served in the role since her election in 2014. She was among the women considered to serve as Biden's vice president, and has been praised for her leadership amid the coronavirus pandemic. Raimondo was also considered for Biden's health and human services secretary, but The New York Times reported last month that labor unions helped block Raimondo from becoming his pick to lead HHS because of her record on pension changes.

Walsh is a veteran union operative and rose to lead Boston's Building and Construction Trades Council, a group that represents ironworker and electrician unions, among others. Walsh has been serving as Boston's mayor since 2013, and was a rumored potential Labor pick in 2016 if Hillary Clinton had won the presidency. Walsh's selection is a victory for AFL-CIO President Richard Trumka, who rallied his federation of 56 unions to back the Boston mayor soon after Biden won the election.

Guzman is the director of California's Office of the Small Business Advocate, a government office that works to support and grow small businesses in America's most populous state. Prior to taking over the state office, Guzman was the deputy chief of staff and senior adviser at the US Small Business Administration, the office she will now lead.

Graves served in the Obama White House as the executive director of the President's Council on Jobs and Competitiveness and as the deputy assistant secretary for small business, community development and housing policy at the US Department of Treasury. Graves was previously a partner with Graves, Horton, Askew & Johns, LLC. He was the former director of public policy for the business roundtable and was previously a policy adviser for the US Department of the Treasury's Office of Domestic Finance.

The announcements come days after pro-Trump supporters stormed and breached the US Capitol. Five people are dead, including a US Capitol Police officer, after President Donald Trump urged his supporters to fight against the ceremonial counting of the electoral votes in Congress, repeating lies about the election being stolen from him and promising to join them.

Biden on Thursday slammed the police for their different treatment of the pro-Trump mob and Black Lives Matter protesters during demonstrations last year. The day prior, he said the rioting at the US Capitol amounted to an "unprecedented assault" on US democracy, and called for Trump to immediately go on national television and "demand an end to this siege."