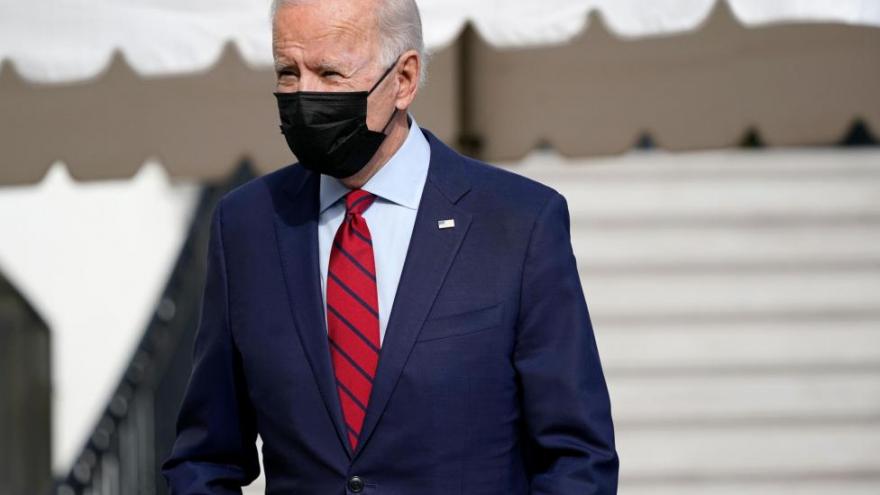 President Joe Biden is expected to huddle with Senate Democrats on Tuesday as the chamber gears up to pass the White House's top legislative priority: a major pandemic relief plan.

(CNN) -- President Joe Biden made an aggressive pitch to Senate Democrats for his relief plan, telling them during a virtual meeting Tuesday that they all need to accept some provisions they might not like but also must demonstrate to the American people they are responding to the devastating public health and economic crises, according to a source with direct knowledge of the discussion.

Biden told Democrats that the vote he is asking them to take isn't politically difficult, arguing that it is popular and has bipartisan support outside the halls of Congress, the source said. Biden said Democrats need to show voters they can accomplish this major achievement, while conceding they may have to accept some pieces of the plan they might not favor.

Biden joined Senate Democrats virtually during their caucus lunch Tuesday afternoon, spoke for roughly 15 minutes and didn't take questions, the source said. The meeting came as Democrats face pressure to stick together to pass the sweeping rescue package. Biden also held a virtual meeting with a group of Senate Democrats on Monday.

Biden spoke broadly but didn't get into the details of the ongoing debates within the Senate Democratic Caucus, per senators on call, including how to structure enhanced jobless benefits. There is an ongoing debate about whether to pare back the jobless benefits to $300 per week, down from $400 in the House-passed bill, and multiple Democrats say that issue has not yet been resolved.

Democratic Sen. Joe Manchin of West Virginia is pushing for the $300 level, but Democratic Sen. Chris Coons of Delaware told CNN that he wouldn't support reducing the benefit.

The President's ongoing outreach underscores the important role the narrow Democratic majority will play in getting the Covid package across the finish line. The caucus has no room for error in a chamber with a 50-50 partisan split and Vice President Kamala Harris acting as the tiebreaker.

The House passed the President's $1.9 trillion package early Saturday morning with zero Republicans voting in favor. Now, all eyes are on the Senate, where Majority Leader Chuck Schumer could bring the Covid package -- which includes direct checks, small business aid, and funding for schools, state and local governments and vaccine distribution -- to the floor as early as Wednesday.

Biden and Senate Democrats have discussed "targeting" the Covid relief package, but not reducing the overall price tag of the $1.9 trillion bill, according to Democratic Sen. Jon Tester of Montana, who attended the virtual meeting Monday.

Tester said that Biden was mainly in listening mode as Democrats proposed certain changes that could be made through the amendment process. Tester ultimately predicted there would be "modest" changes made.

White House press secretary Jen Psaki said Monday during a news briefing that the President's "focus this week and the coming weeks until it's passed is on the American Rescue Plan."

"We're going to be evaluating day by day what the needs are," Psaki said when asked about the President's contact with lawmakers over the measure, adding, "We've reserved time in his schedule to ensure that he can be engaged, roll up his sleeves and be personally involved in making phone calls, having more zoom meetings, potentially having people in the Oval Office, to make sure we can get this across the finish line. He will be very involved personally."

Schumer predicts late nights in the Senate later this week

Schumer said in a floor speech Monday that the Senate will take up the legislation "this week," saying, "I expect a hardy debate and some late nights."

One reason late nights are expected and that will make the job of Democratic leadership more challenging is that senators are walking into a legislative minefield later this week since the relief bill is being considered under budget reconciliation rules that allow a free-flowing amendment process, meaning senators can force votes on as many amendments as they like. That means if two Democrats break ranks, they could amend the bill with the backing of 49 Republicans.

Democratic leaders want their caucus to hold the line against amendments that could alter the core of the bill and ultimately derail the chances of getting the sweeping measure out of both chambers by March 14 when jobless benefits are set to expire for millions of Americans.

Schumer said in floor remarks Tuesday that the chamber is likely to start considering the bill as soon as Wednesday.

Republicans have so far been united in opposition to the measure, which they argue Democrats have crafted without their input and have designed to serve as a liberal wish list of agenda items.

Democrats, for their part, say they are willing to work with Republicans, but will not water down a package that they say will deliver much needed aid to the American people hard hit by the pandemic.

"But the economy is not strong enough to sustain things on its own," Schumer said in his floor remarks Tuesday. "We need strong relief to get the economy going so it can continue on an upward path on its own. That's what this bill is designed to do."

After Senate, the bill goes back to the House

Once the bill passes the Senate, it will have to go back to the House for a final vote before it can go to Biden's desk.

Early last Saturday morning, the House passed the legislation with a provision to increase the minimum wage. But that can't be included in the Senate's version of the bill, according to a ruling from the parliamentarian, a little known but powerful Senate official. As a result, the Senate is expected to strip that provision out in its version of the bill, necessitating a separate vote in the House to sync up the legislation.

House Majority Leader Steny Hoyer predicted confidently on Tuesday that chamber would easily clear the bill when it would return next week, shutting down the possibility that progressives, who have said they will do anything to get minimum wage passed, would go as far as not supporting the final version of the legislation if the key proposal is not included.

"I cannot believe that the people who voted to send it to the Senate will not also vote to pass it and send it to the President for his signature," Hoyer told reporters. "It's going to pass when it comes back."