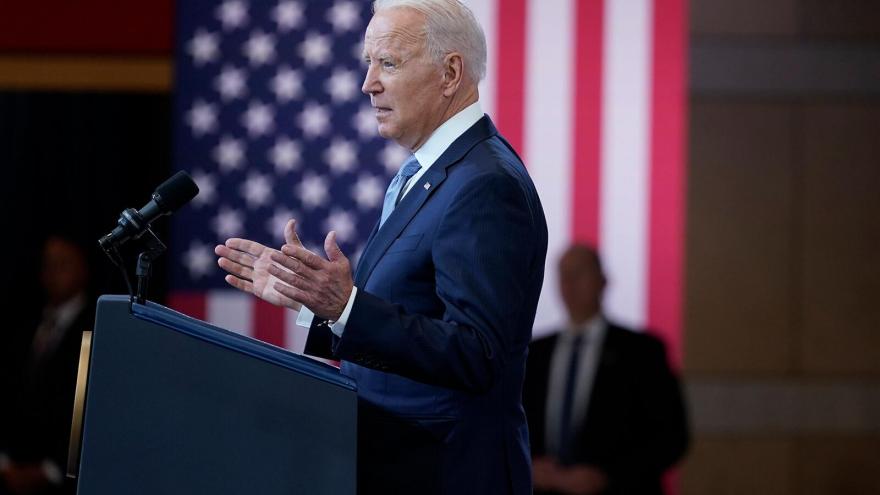 President Joe Biden delivers a speech on voting rights at the National Constitution Center, Tuesday, July 13 in Philadelphia. Biden will travel to Capitol Hill on July 14 to meet with Senate Democrats during their luncheon.

(CNN) -- President Joe Biden returned to Capitol Hill Wednesday to meet with Senate Democrats during their luncheon as he makes the case for both the bipartisan infrastructure proposal and a more sweeping package that can be pursued through reconciliation.

"Is this my homecoming?" Biden joked as he walked up to the Capitol press corps, a familiar sight to the former Delaware senator.

The President then pumped his first and said, "We're going to get this done."

The President's visit came on the heels of Democrats on the Senate Budget Committee reaching an agreement on a $3.5 trillion budget resolution that includes spending for Biden's sweeping social agenda. This effort is expected to set the stage for Democrats to pass reforms like expanding the child tax credit, offering paid medical and family leave and changing the US tax code -- all without Republican support. It is separate from the bipartisan proposal that would invest in traditional infrastructure like roads and budgets.

Senate Majority Leader Chuck Schumer accompanied Biden into the meeting and echoed the President's line, saying, "We're going to get this done."

White House officials understand that the Senate Democrats' $3.5 trillion framework for reconciliation adds pressure to ongoing talks on the smaller bipartisan infrastructure deal. Some Republicans, who hoped the bipartisan deal would erode Democratic support for reconciliation, have publicly worried that linkage between the two means they'd be doing the opposite and facilitating the larger package.

But a senior administration official expressed cautious optimism that Tuesday's announcement won't cause Republicans to abandon the deal, which Senate leaders aim to pass this month: "We'll see. It shouldn't."

Later on Wednesday, Biden told CNN's Jeff Zeleny that he's not worried about any potential disruptions.

"I think it's the only way to get it done, is having two tracks," Biden said ahead of a meeting with local officials at the White House.

"I went up and spoke to the Democratic caucus today and we put together a plan that dealt with infrastructure. It's a bipartisan plan," he said. "I think we're in good shape. There may be some slight adjustments in -- of the pay-fors. That's going to get down to what the Congress wants to do."

A source in the Democratic lunch on Wednesday said that Biden was clear-eyed about the need to get the infrastructure proposals passed and came with a message that it needs to get done.

The source said that Biden made the case that the bills would make a real difference in the lives of working families who feel forgotten. The source also added that the President received a warm reception.

Schumer announced the budget reconciliation agreement on Tuesday night flanked by Budget Chairman Bernie Sanders of Vermont and others on the committee in a sign of unity among members of the Democratic caucus.

It is unclear whether the proposal of $3.5 trillion can earn the support of moderates, and the bill still has a long way to go. Schumer on Tuesday said that the legislation will eventually have the 50 votes needed to pass the Senate.

Biden's meeting with Senate Democrats came just before he hosted a bipartisan group of governors and mayors at the White House to discuss the bipartisan infrastructure framework. The White House has sought to build support with state and local leaders -- similar to the strategy pursued with the American Rescue Plan -- as the details of the bipartisan deal are still being hammered out.

The President said he was meeting with the group of local leaders, which included both Republicans and Democrats, because "there are no Democratic roads or Republican bridges."

"We have a bipartisan chance to solve these problems," Biden said, adding it was also a chance for the US to "win the second quarter of the 21st century."

"We got to build for tomorrow, there's a lot we're going to do," he continued. In what may have been a slight shot at his predecessor, Biden joked that "hopefully it won't be like the last team in here once a week and not getting anything done. We're going to get something done."