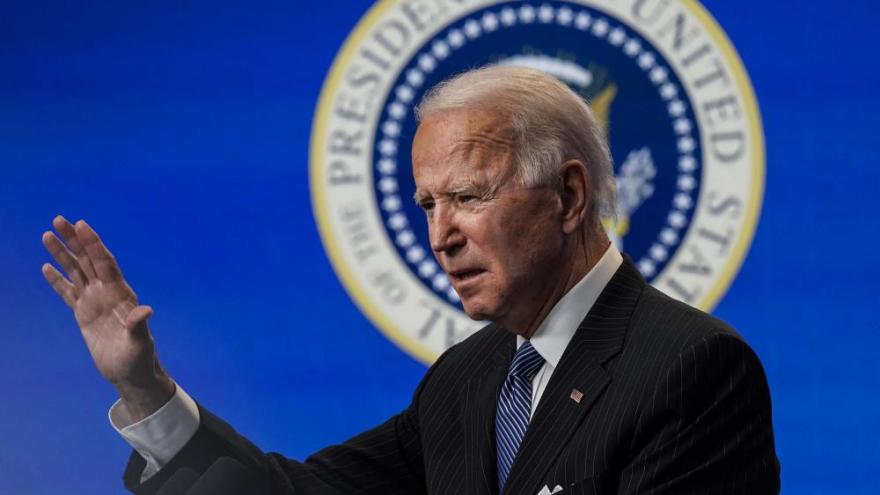 President Joe Biden, seen here at the White House complex on January 25 in Washington, DC, is expected to halt new oil and gas leases on federal lands on January 27.

(CNN) -- President Joe Biden is set to order a moratorium on new oil and gas leases on federal lands on Wednesday, according to a person familiar with his plans.

The move is expected to be the most prominent in a series of climate actions the President will take on Wednesday, including elevating the climate crisis as a national security issue.

The halt on new leases, which would fulfill a campaign promise by Biden, would apply to federal land and water areas, but wouldn't affect existing leases. It would allow the administration to conduct a comprehensive review of the federal leasing program.

Biden is also expected to take action on protecting 30% of the country's land and water by 2030, known as "30 by 30."  A 2018 study by the Center for American Progress, a liberal advocacy organization based in Washington, found that only 12% of the country's land has been conserved, including as national parks and national wildlife refuges.

The moratorium on new oil and gas leases on federal lands expands the 60-day moratorium Biden signed on his first day in office.

The President has moved swiftly to take action on climate since taking office last week, including rejoining the Paris climate accord, canceling the Keystone XL pipeline and directing agencies to review and reverse more than 100 actions taken by the Trump administration on the environment.

The actions underscore the Biden administration's prioritization of combating the climate crisis. The President has appointed former secretary of state John Kerry as his special presidential envoy for climate. Kerry will be a Cabinet-level official in Biden's administration and will sit on the National Security Council. Biden has also named Gina McCarthy, a former head of the Environmental Protection Agency, as his White House climate czar.

Biden said on the campaign trail he wanted to halt new oil and gas drilling on federal lands. He said at a September CNN town hall that he supports the continued the use of hydraulic fracturing to open underground natural gas formations, a practice known as fracking, as a way to "transition" to cleaner kinds of energy.

The President, who has said he will not ban fracking, was pressed during the presidential campaign by several 2020 Democratic primary rivals and climate activists to call for a nationwide ban on fracking.

Fracking is a controversial method of drilling that involves shooting high pressure water, sand and other compounds underground to make small fractures in rock to release oil and gas. There have been questions about the effect fracking has on drinking water, methane emissions, and it has been tied to a rise in earthquakes.