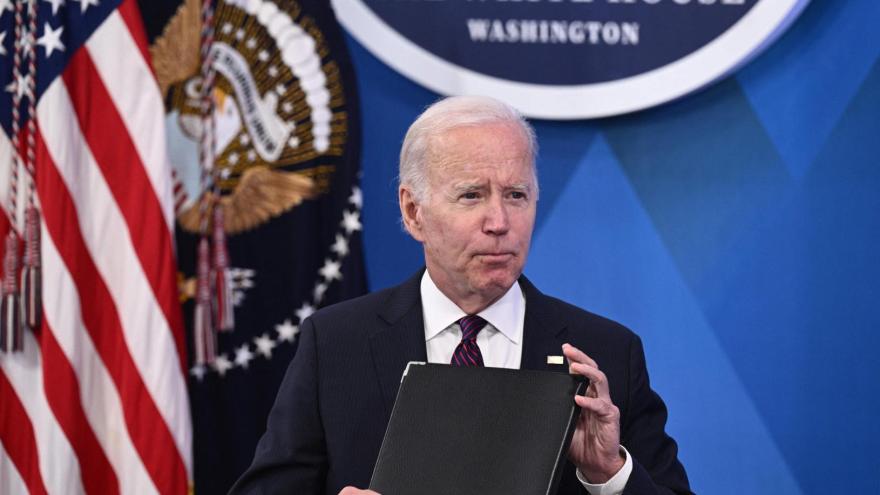 President Joe Biden speaks about the American Rescue Plan investments in the South Court Auditorium of the White House in Washington, DC, on September 2.

(CNN) -- President Joe Biden will deliver a speech on the "Cancer Moonshot" initiative at the John F. Kennedy Presidential Library and Museum in Boston on Monday, aiming to draw attention to his administration's efforts to halve the cancer death rate over the next 25 years.

Biden's remarks, which will take place on the 60th anniversary of Kennedy's famous "We choose to go to the moon" speech, will draw parallels between the former President's goal of landing a man on the moon and Biden's own "vision for another American moonshot -- a future where we end cancer as we know it," a White House official previewing the speech first to CNN said.

"When President Kennedy committed to putting a man on the moon and bringing him back, the United States had the building blocks to know that was possible. There were major scientific and societal advances that needed to happen. As a nation, we needed to fully commit to a future in which traveling to the moon was possible -- and we did just that," the official said.

"Today, we have many of the building blocks needed to make significant progress treating cancer, but we must come together to deliver on the promise. And because of incredible advances in science, technology, and medicine, we can already begin to see what is possible," the official added.

Biden has often referenced Kennedy's September 12, 1962, speech at Rice University over the years as he's talked about efforts to fight cancer.

Caroline Kennedy, the US ambassador to Australia and daughter of the late President, welcomed Biden's speech at the JFK Library, saying: "Sixty years after my father challenged Americans to land on the moon, President Biden is welcoming great challenges as new opportunities by setting us on a bold course to end cancer as we know it."

The fight against cancer is a deeply personal one for Biden, who lost his son Beau to brain cancer in 2015.

In his State of the Union address in 2016, President Barack Obama tasked then-Vice President Biden with leading the White House's Cancer Moonshot initiative. While out of office, Biden and his wife Dr. Jill Biden founded the Biden Cancer Initiative, a nonprofit organization supporting cancer research and prevention.

The President relaunched the White House's Cancer Moonshot initiative in February, setting a goal of cutting the cancer death rate by at least 50% by 2047 and improving the experience of cancer patients and their families. Biden also made ending cancer one of the pillars of his unity agenda outlined in this year's State of the Union address.

The President has appointed a Cancer Cabinet, featuring representatives from 20 departments, agencies and the White House, including Veterans Affairs Secretary Denis McDonough and Dr. Alondra Nelson, head of the White House Office of Science and Technology Policy.

This summer, the group unveiled five key priorities, including "(1) close the screening gap, (2) understand and address environmental exposure, (3) decrease the impact of preventable cancers, (4) bring cutting edge research through the pipeline to patients and communities, and (5) support patients and caregivers," according to the White House.

Cancer is the nation's second highest cause of death, according to the Department of Health and Human Services. But the American Cancer Society earlier this year noted progress has been made as cancer mortality rates have fallen.

The overall cancer death rate dropped by about a third (32%) from its peak in 1991 to 2019, from about 215 deaths for every 100,000 people to about 146, averting about 3.5 million deaths during that time, according to an annual report on cancer statistics from the American Cancer Society. Most of that decline can be attributed to a drop in mortality among lung cancer patients.