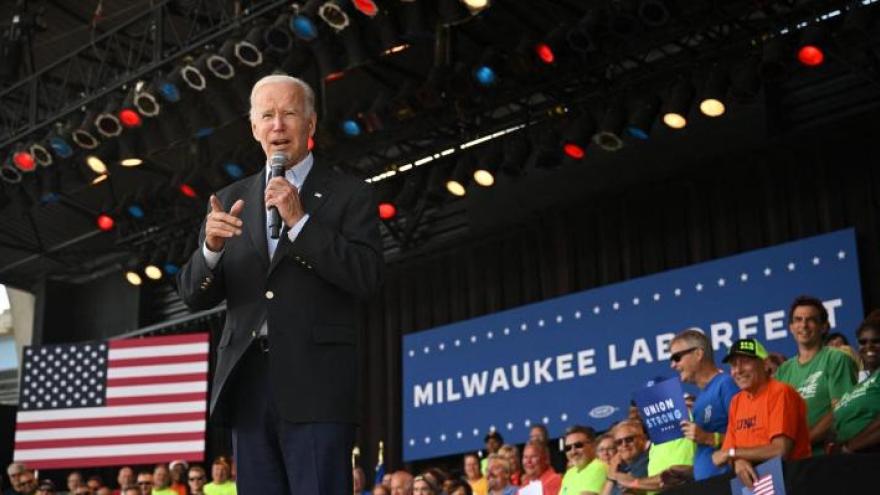 (CNN) -- President Joe Biden on Tuesday urged his Cabinet secretaries to swiftly implement key pieces of legislation as he seized the opportunity to tout his administration's recent legislative successes just two months before the midterm elections.

Tuesday's meeting was the first time Biden's Cabinet had assembled since March and came as his administration moves to implement laws that were passed during the summer months, including bills aimed at boosting domestic semiconductor production and the climate, health care and tax bill.

Biden said he called the meeting "to lay out in detail how we're going to implement each of these laws we've worked so hard to get passed, and we've gotten passed, because passing these historic bills is only the first step in delivering to the American people."

The President told reporters Vice President Kamala Harris and Attorney General Merrick Garland would also outline in the meeting "everything our administration is doing to protect women and the right to choose in the wake of the Dobbs decision" overturning Roe v. Wade.

The President has taken a series of executive actions, but additional options remain limited as the White House encourages Congress to codify the landmark abortion ruling, which does not currently have the 60 votes necessary to pass.

Biden has ramped up campaign trail appearances outside Washington in recent days, traveling to the battleground state of Pennsylvania three times in the past week in addition to a Labor Day visit to Wisconsin. The final nine-week sprint to the midterm elections has kicked off in earnest, and Biden has embraced in-person politicking, touting his successes while also casting Republicans as "extreme" as he seeks to frame the 2022 contests as a choice between Democratic policies and former President Donald Trump's threats to democracy.

That's a strategy that comes as the Biden administration rides fair winds following a spate of positive headlines over the summer. In addition to the semiconductor chip bill and climate, tax and infrastructure law, Congress passed a bill aimed at shoring up protections for veterans exposed to toxic burn pits during their military service, as well as gun safety legislation in the wake of the Uvalde, Texas, school shooting. Gas prices have also moderated somewhat since record highs in June.

The meeting comes as the administration outlined its implementation plans for the CHIPS bill, detailing key goals before applications for the $50 billion program open early next year.

A strategy released by the Department of Commerce Tuesday details four key goals for what it's calling the "CHIPS for America" program: to "establish and expand domestic production" of semiconductors, to "build a sufficient and stable supply of mature node semiconductors," to invest in research and development for semiconductor technology, and to create "tens of thousands of good-paying manufacturing jobs and more than hundred thousand construction jobs."

Guidance on how to apply for the program will be released "by early February 2023," with awards and loans "made on a rolling basis" next year.

Approximately $28 billion of the funding will go toward domestic chip production, which will be spent via "grants or cooperative agreements, or to subsidize loans or loan guarantees," the Department of Commerce said.

It will also help boost capacity for other "mature and current-generation chips, new and specialty technologies, and for semiconductor industry suppliers" with a $10 billion investment.