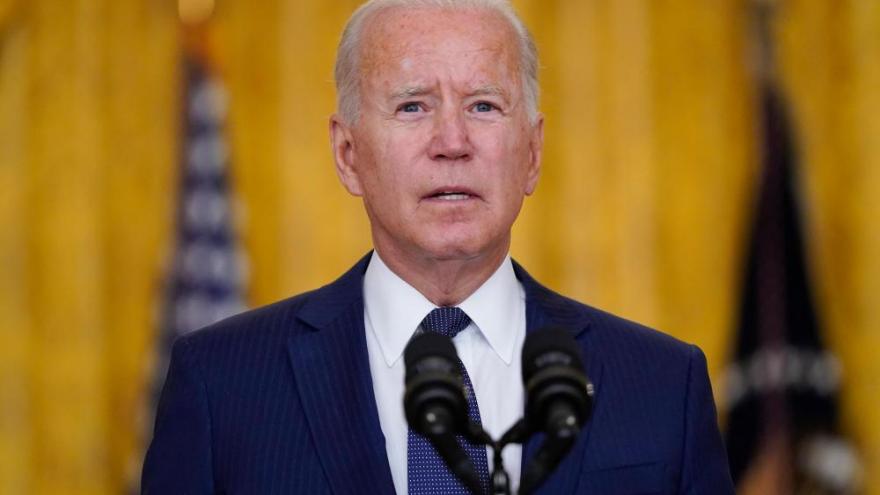 President Joe Biden plans to contact the families of the 13 US service members who were killed in Thursday's suicide attacks outside of Kabul's international airport.

(CNN) -- President Joe Biden and Vice President Kamala Harris were warned by their national security team on Friday "another terror attack in Kabul is likely," according to White House press secretary Jen Psaki.

"The next few days of this mission will be the most dangerous period to date," Psaki said in a statement on Friday.

The US is "taking maximum force protection measures" at Kabul's airport, Psaki said. The US military is airlifting out thousands of people every few hours and is continuing to prioritize evacuating the remaining American citizens, she said.

The US Embassy in Kabul again advised US citizens at a number of gates at the airport to "leave immediately," citing security threats. "Because of security threats at the Kabul airport, we continue to advise U.S. citizens to avoid traveling to the airport and to avoid airport gates," the alert said.

That's fewer than in the same 12-hour period the day before. Approximately 7,500 people were evacuated from Kabul from 3 a.m. to 3 p.m. ET Thursday.

The US has evacuated and facilitated the evacuation of approximately 109,200 people since August 14, according to the White House.

"There are approximately 500 American citizens we are currently working with who want to leave and with whom we are communicating directly to facilitate their evacuations," State Department spokesperson Ned Price said earlier Friday.

Biden has directed Secretary of State Antony Blinken to continue diplomatic efforts with international partners "to secure means for third-country nationals and Afghans with visas to leave the country even after the US military presence ends," Psaki said.

A spokesman for US Central Command said in a statement Friday evening that the US has conducted an airstrike against an ISIS-K planner.

"U.S. military forces conducted an over-the-horizon counterterrorism operation today against an ISIS-K planner. The unmanned airstrike occurred in the Nangahar Province of Afghanistan. Initial indications are that we killed the target. We know of no civilian casualties," spokesman Capt. Bill Urban said in the statement.

That announcement came after Psaki had said earlier Friday that commanders had "updated the President and vice president on plans to develop ISIS-K targets."

"The next few days of this mission will be the most dangerous period to date. The President reaffirmed with the commanders his approval of all authorities they need to conduct the operation and protect our troops, and all reported back that they have the resources they believe they need to do so effectively," Psaki said.

Harris was not at the meeting in person but joined via a secure video teleconference, Psaki said.

Pentagon officials say they are receiving reports of credible threats to the evacuation effort in Afghanistan and are monitoring those threats "virtually, in real time."

"We still believe there are credible threats. In fact, I'd say specific, credible threats, and we want to make sure we're prepared for those," Pentagon spokesman John Kirby said Friday. He discussed efforts to bolster force protection, including expanding the perimeter around Kabul airport and closing roads in the final days before the US military completes its withdrawal on August 31.

"We have additional information," Kirby told reporters at a Pentagon briefing. "What you're seeing us act on, to the degree we can talk about, it is based on information that we have."

Pressed by CNN's Barbara Starr on whether another attack is potentially imminent, Kirby said, "We certainly are prepared and would expect future attempts, absolutely, but I won't get into the specifics of what those are and why we're doing what we're doing."

Biden on Friday said the operation to evacuate American citizens and vulnerable Afghans from Afghanistan following the Taliban takeover was "dangerous" but "a worthy mission."

Biden said the loss of 13 US service members to a suicide bombing outside of Kabul's airport on Thursday was "tragic" during a meeting with Israeli Prime Minister Naftali Bennett at the White House.

"Losing a son or daughter, a husband, a wife, is like being sucked into a big black hole in the middle of your chest and you don't think there's any way out," Biden said, adding: "Our heart goes out to all those who we've lost."

The President continued: "The mission there, they performed is dangerous. And now it's come with a significant loss of American personnel. And, but it's a worthy mission because they continue to evacuate folks out of that region."

The US Army confirmed that one soldier was among the 13 US service members killed in the attack in Kabul on Thursday. The soldier killed in the Kabul airport attack was a member of the 1st Special Forces Command, the command said in a statement on Twitter Friday. The US Marine Corps announced that 11 Marines were among the dead and the Navy confirmed Friday that one sailor also died.

Biden plans to contact the families of the 13 US service members who were killed in the suicide attack in Kabul, according to a senior White House official.

Biden called the troops "heroes" in remarks at the White House on Thursday and said he was "outraged as well as heartbroken."

ISIS in Khorasan, known as ISIS-K, has claimed that an ISIS militant carried out the suicide attack, but provided no evidence to support the claim. US officials have said the group was likely behind the bombing.

The attack came as the US and other countries race to complete a massive evacuation of their citizens and Afghan allies by August 31 following the Taliban takeover of the country.

Biden addressed the families of the fallen US service members on Thursday, saying, "My heart aches for you."

"We have some sense, like many of you do, what the families of these brave heroes are feeling today. You get this feeling like you're being sucked into a black hole in the middle of your chest. There's no way out," Biden said in remarks at the White House.

He continued: "My heart aches for you and I know this, we have a continuing obligation, a sacred obligation to all of you, to the families of those heroes. That obligation is not temporary, it lasts forever."

Biden's son, Beau, an Iraq War veteran who served as the attorney general of Delaware, died at the age of 46 after battling brain cancer. Biden often speaks about his son and his service.

In addition to the 13 US service members who were killed, 18 were injured in the bombing, according to the head of the US Central Command. At least 170 people were killed and more than 200 wounded, an official with Afghanistan's Ministry of Public Health told CNN Friday.

US service members wounded in Thursday's attack have landed at Ramstein Air Base in Germany and have been transferred to Landstuhl Regional Medical Center for treatment, Maj. Gen. Hank Taylor, the deputy director of joint staff regional operations, told reporters at a Pentagon briefing on Friday.

The State Department said Friday that the "vast majority" of locally employed US embassy staff and their families have either been evacuated from Afghanistan or are waiting at the Kabul airport to leave.

The Department of Homeland Security is taking on the major challenge of overseeing the federal government response for relocating evacuated Afghans to the United States, Psaki announced Friday.

Philadelphia International Airport will begin processing Afghan evacuees Friday, in addition to Dulles Airport, the Pentagon said. Additional vetting and security processes could lead to some refugees facing long wait times at airports upon their arrival in the United States, Psaki said.

In the wake of the attack, the Department of Defense has authorized three more US bases to help support evacuation operations from Afghanistan, Kirby told reporters at the briefing. The bases are Marine Corps Base Quantico, Virginia; Fort Pickett, Virginia, and Holloman Air Force Base, New Mexico.

In the days leading up to the bombing, Biden had spoken about the risk of a terror attacks as one of the reasons for sticking with the August 31 deadline for withdrawing troops. The President had also promised a swift and forceful response to any disruption to the operation.

Biden and his team are now bracing for the possibility of another terrorist attack in the final days of the evacuation operation.

"The threat is still out there," a senior White House official said. "It's still heightened."

Biden plans to receive regular updates throughout the day on Friday on the state of the evacuation mission and the ongoing terrorist threat in Kabul, beginning with his daily intelligence briefing in the morning.

The President will then meet with his national security team in the Situation Room at the White House to discuss Afghanistan, as he has every day this week.

The official said Biden was "solemn and serious" on Thursday as updates on the attack filtered in.