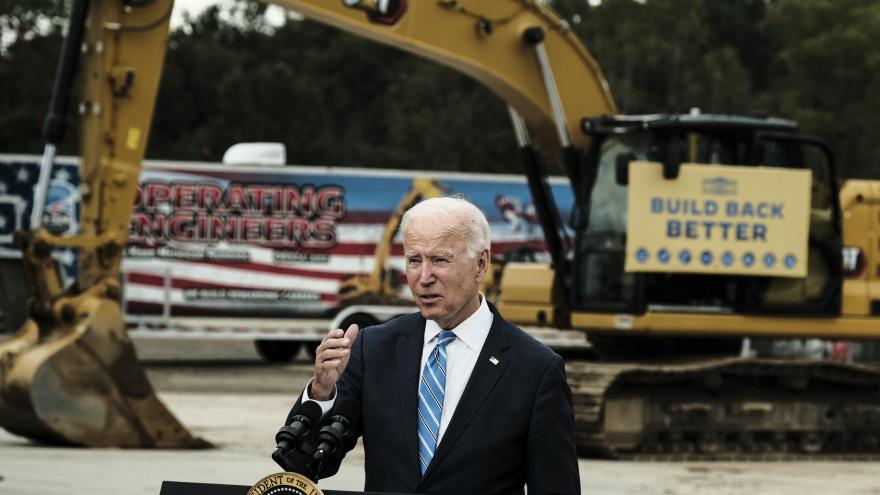 (CNN) -- President Joe Biden on Wednesday is set to ramp up the pressure on Republicans as the nation's nears the deadline to raise the debt ceiling on Wednesday, as he looks to argue the GOP is putting the country at risk of a possible debt default by standing firm against raising the nation's debt limit.

"The President will also reiterate the cost of any delay -- with each day of Republican obstruction and political games increasing the risk that even a near-miss default would result in more costs for middle-class families higher interest rate on auto and home loans, as well as credit cards," a White House official said.

The President is set to meet with top banking, financial and other industry leaders at the White House Wednesday as he is ratcheting up the public pressure campaign to raise the nation's debt limit in a bipartisan way as Republicans continue to block efforts to do so. Democrats are able to raise the debt ceiling on their own without Republican votes but would need to use the lengthy reconciliation process to do so. Democratic leaders in the House and Senate have said they are not willing to use that process and instead are looking for Republicans to cooperate with paying the nation's bills.

Treasury Secretary Janet Yellen, who will be in attendance on Wednesday, said last month that the nation will run out of money to pay its bills on October 18, leaving the US facing default for the first time in its history.

On Tuesday, Biden said it's a "real possibility" Senate Democrats could allow for a one-time carveout of Senate filibuster rules in order to address the debt ceiling, but it's unclear whether Democrats would have enough votes within their own party for the rule change.

"The President will detail the Republican obstruction that has led us to this point, with the GOP refusing to do the right thing by fulfilling its bipartisan responsibility to address the debt limit -- even after adding $8 trillion under the previous Administration," the official added. "Now Republicans are refusing to get out of the way to let Democrats go it alone and remove this cloud from over our economy, and instead have voted to default, filibuster, and block."

The meeting with business leaders and CEOs of major financial institutions and other industries at the White House Wednesday afternoon will be another opportunity for Biden make his case on the debt limit as officials have warned of the dire economic consequences of failing to raise the nation's debt ceiling.

The meeting will include leaders of major banks, like Bank of America CEO Brian Moynihan and JPMorgan Chase CEO Jamie Dimon. Leaders in the housing, business, tech and defense industries will also be in attendance, along with the CEO of AARP -- Jo Ann Jenkins - whose organization represents millions of Americans whose Social Security retirement and Medicare benefits would be at risk if there was a default, the official noted. Some of the leaders are expected to attend virtually.

"These executives represent some of America's best-known companies and industries, and they understand firsthand that a default would be economically devastating -- risking millions of jobs and throwing our country into recession, and causing lasting harm to America's economic strength by threatening the dollar's status as the currency the world relies on and downgrading the U.S.'s credit rating," the official said.

Earlier this week, Biden told reporters that he couldn't guarantee the debt ceiling would be raised.

"No I can't -- that's up to Mitch McConnell. ... I can't believe that that would be the end result, because the consequences are so dire. I don't believe that, but can I guarantee it? If I could, I would, but I can't," Biden said.