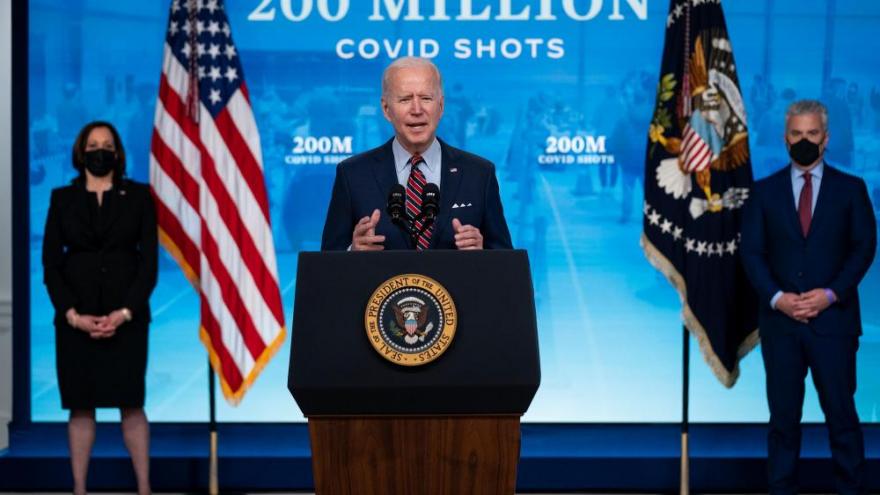 President Joe Biden on April 22 will kick off a climate summit attended by 40 other world leaders by announcing an ambitious cut in greenhouse gas emissions as he looks to put the US back at the center of the global effort to address the climate crisis and curb carbon emissions.

(CNN) -- President Joe Biden on Thursday kicked off a virtual climate summit attended by 40 other world leaders by announcing an ambitious cut in greenhouse gas emissions as he looks to put the US back at the center of the global effort to address the climate crisis and curb carbon emissions.

At the White House summit, which is taking place on Thursday and Friday, Biden committed the United States to reducing its greenhouse gas emissions by 50%-52% below its 2005 emissions levels by 2030. While the goals are a part of the Paris climate agreement that Biden rejoined upon taking office, they are non-binding and the administration has not rolled out a plan on how the US will meet them. Officials said Biden and his team arrived at the final number in a meeting at the White House on Wednesday morning.

In an address opening the summit, Biden laid out his vision for a greener economy in which climate change is taken seriously across all sectors and results in more jobs for the blue-collar workers he has focused on throughout his career.

"That's where we're headed as a nation, and that's what we can do if we take action to build an economy that's not only more prosperous but healthier, fairer and cleaner for the entire planet," Biden said.

"These steps will set America's economy to net-zero emissions by no later than 2050," he added.

Biden called on the world leaders gathered at the summit, particularly those who represent the world's largest economies, to take action within their own countries to curb emissions.

"No nation can solve this crisis on our own," Biden said. "We have to step up," he added.

Vice President Kamala Harris, who introduced Biden at the start of the summit, pointed to the extreme weather the US has been battered by in recent years, including the wildfires in her home state of California.

"As a global community, it is imperative that we act quickly and together to confront this crisis and this will require innovation and collaboration around the world," the vice president said.

The Biden administration's target to cut emissions was struck after lengthy consultations with government agencies, scientists, industry representatives, governors, mayors and environmental researchers. The move underscores the President's commitment to addressing the climate crisis and follows on his pledge to work with other countries to find joint solutions to global issues.

RELATED: Biden aims to cement US credibility on climate and galvanize world leaders at virtual summit

When then-President Barack Obama first joined the Paris climate agreement in 2015, he pledged to cut emissions by a range -- 26% to 28% -- by 2025, making the new 50%-52% cut a major jump. A second official said the higher target would give the US "significant leverage" in convincing other countries to raise their ambitions ahead of a climate summit in Glasgow later this year.

What the President will not unveil, at least right now, is a specific road map for how the United States will reach those targets, which are being described as "economy-wide." Officials described "multiple pathways" for the US to arrive at the goal, and said the President's climate task force would release sector-by-sector recommendations later this year on achieving the necessary cuts.

Biden sought to make the case that taking steps to address the climate crisis would make economies more resilient and competitive.

"When people talk about climate, I think jobs," Biden said. "Within our climate response lies an extraordinary engine of job creation and economic opportunity ready to be fired up."

He said: "Countries that take decisive action now to create the industries of the future will be the ones that reap the economic benefits of the clean energy boom that's coming."

Several members in Biden's Cabinet are playing a role at the summit, including hosting sessions, speaking at sessions and discussing how their role or department or agency pertains to issues surrounding the climate crisis, a separate administration official said earlier this week.

A virtual call to action

The summit focuses on mobilizing public and private sector finance to reach net-zero emissions and "build a resilient future," according to the official. The US plans to discuss investing in innovation, which the administration argues is critical to creating transformational technologies to reduce emissions and at the same time creates new economic opportunities.

It's hoped that other countries will follow the US' lead with additional announcements of new goals to tackle the crisis, the administration official said.

"There is a significant sign that we expect action at this meeting. We're looking for people to make announcements, to raise their ambition, to indicate next steps that they intend to be taking to help solve the climate problem," the official said.

While some countries reiterated that they were working toward their initial goals from the Paris climate agreement, Canadian Prime Minster Justin Trudeau said his country would up its goal to cut carbon emissions. The US' neighbor to the north will now aim to cut emissions by 40 to 45% below 2005 levels by 2030, more advanced than the previous goal of 30% below 2005 levels by 2030.

Russian President Vladimir Putin and Chinese President Xi Jinping are two notable leaders attending the summit, underscoring the wide range of leaders attending. Many allies of the US are also in attendance, including French President Emmanuel Macron and British Prime Minister Boris Johnson.

Xi pledged his country's commitment to a "green development," reaffirming China would achieve carbon neutrality by 2060 and peak carbon emissions by 2030. Speaking about the need for global cooperation on climate, Xi said, "Not long ago the Chinese and US sides released a joint statement addressing the climate crisis. China looks forward to working with the international community including the US to jointly advance global environmental governance."

Russian President Vladimir Putin said Russia was committed to carrying out a "large-scale campaign for environmental modernization and greater energy efficiency across all economic sectors."

Putin said when he gave a speech to the Federal Assembly of the Russian Federation on Wednesday he listed "significantly reducing the net accumulated emissions in our country by 2050" as a priority.

German Chancellor Angela Merkel said her country wanted to have at least 55% less emissions by 2030 compared to 1990. She said addressing the global climate crisis is a "herculean task" and said it would involve "nothing short of a complete transformation" of the way the world conducts business.

French President Emmanuel Macron called on leaders to move more quickly on innovative and disruptive technologies. "Basically, 2030 is the new 2050," he said.

Macron said the world needed to "completely transform our financial system" in order to achieve carbon emissions goals. "If we don't set a price for carbon, there will be no transmission," Macron said.

A departure from the Trump-era

The summit is a stark departure from how climate was approached for the past four years under former President Donald Trump. The former President repeatedly denied the scientific reality of the climate crisis and his administration systematically rolled back environmental policies.

Trump withdrew from the Paris agreement, but Biden administration officials said work on reducing carbon emissions proceeded anyway at the state and local level, which prevented the US from losing too much ground.

Linda Thomas-Greenfield, the US ambassador to the United Nations, told "The Axe Files with David Axelrod" that although Trump was rolling back environmental policies during the past four years, "our private sector didn't turn back the clock and our state governments didn't turn back, and the American people broadly didn't turn it back."

"It's incumbent upon us to continue to build on what we're doing during these four years so that it's harder for a different administration to turn things around as quickly," Thomas-Greenfield told Axelrod, who is a CNN senior political commentator.

Since taking office in January, Biden has elevated climate change as an essential element of US foreign policy and national security. The US reentered the Paris climate accord, the landmark international agreement signed in 2015 to limit global warming, which Trump pulled the US out of.

Biden appointed former Secretary of State John Kerry as his special presidential envoy for climate, a Cabinet-level position that sits on the National Security Council. The President also named Gina McCarthy, a former head of the Environmental Protection Agency, as his White House climate czar to lead his newly formed Office of Domestic Climate Policy.

Climate is a big focus of the President's roughly $2 trillion infrastructure proposal. He has said his proposal would create hundreds of thousands of jobs while tackling the climate crisis, reducing emissions and building a "modern, resilient and fully clean grid."

Biden focused heavily on the potential economic boon that fighting climate change could present. His critics have described attempts to move the country away from fossil fuel as job-killers. But Biden hopes to highlight the opportunities that would come along with overhauling technology to make it cleaner.

"There is only one playbook that works in this moment and that playbook is you chase after the economic opportunity that tacking the climate crisis presents and we're doing that," the senior administration official said.

Officials said they conducted a "techno-economic" analysis across various sectors -- including electricity, transportation, buildings, industry, lands and oceans -- to identify various pathways for reducing emissions in each one. That included the potential for new standards and incentives that would limit greenhouse gasses.

"The 2030 target is a target we believe we can meet," the senior administration official said.

As a presidential candidate, Biden put forward a plan to end carbon emissions from power plants by 2035 and proposed broader public investment in green infrastructure, including $2 trillion for clean energy projects.