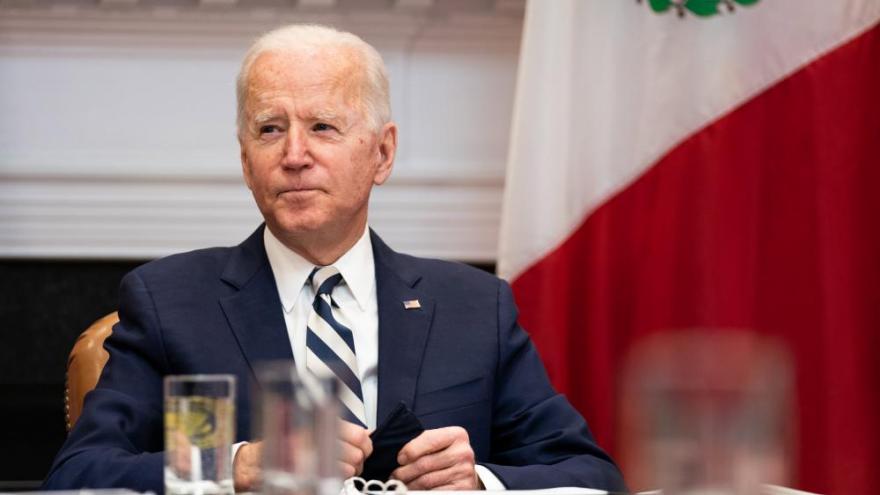 President Joe Biden is expected to announce Tuesday that Merck & Co. will partner with Johnson & Johnson to help manufacture the company's coronavirus vaccine, administration officials familiar with the matter confirmed to CNN.

(CNN) -- President Joe Biden, announcing that drugmaker Merck will help manufacture a vaccine developed by Johnson & Johnson, said the United States would have enough doses for every adult American by the end of May. That does not mean they would all be administered by then.

The timeline speeds up by two months the administration's previous goal of having enough shots by the end of July.

"That's progress," Biden said in remarks from the White House, warning there could still be delays in getting shots in Americans' arms.

The arrangement between two competitors is unusual and underscores the urgency in manufacturing and distributing enough vaccine doses to inoculate as many Americans as possible.

Biden hailed the partnership as a way to quickly jumpstart the sluggish vaccine production, likening it to cooperation between corporations during World War II.

The White House said it was utilizing the Defense Production Act to help equip two Merck facilities to manufacture the Johnson & Johnson product, including by bolstering "fill-finish" capacity when the doses are places in vials and by increasing availability of the components of the vaccines.

The decision came about after it became clear to administration officials that Johnson & Johnson would fall short of their manufacturing goals.

The planned partnership was first reported by The Washington Post.

The US Food and Drug Administration granted emergency use authorization to the Johnson & Johnson vaccine on Saturday, and the US Centers for Disease Control and Prevention recommended it for adults age 18 and older. The vaccine's distribution is already underway and first shots are expected Tuesday.

Two Covid-19 vaccines from Pfizer/BioNTech and Moderna have already been authorized for emergency use in the United States by the FDA. Unlike those vaccines, Johnson & Johnson's vaccine only requires one shot.

Merck had been working on developing its own Covid-19 vaccine, but discontinued its effort at the end of January after early studies showed immune responses were inferior to natural infection and other Covid-19 vaccines.

Merck is expected to dedicate two of its facilities to helping Johnson & Johnson, an administration official said, in a rare partnership between two competitors.

Administration officials expressed surprise and disappointment last month when it became clear Johnson & Johnson would have fewer initial doses of its vaccine than originally planned because of production issues at its facilities.

The company said it had about 4 million doses of its vaccine ready to ship "immediately," and said it should have 20 million ready by the end of March.

The announcement comes as federal health officials warn against relaxing coronavirus restrictions as gains against the pandemic appear to plateau.

During a White House Covid-19 Response Team briefing Monday, CDC Director Dr. Rochelle Walensky said she is "deeply concerned" about the potential shift in the trajectory of the pandemic.

"Please hear me clearly: At this level of cases with variant spreading, we stand to completely lose the hard earned ground we have gained," Walensky said Monday.

Walensky said the country can stop the surge of cases in this country by wearing a mask that fits, maintaining social distance, practicing good hand hygiene and avoiding crowds.

"Please stay strong in your conviction," Walensky said. "Continue wearing your well-fitting mask and taking the other public health prevention actions that we know work."