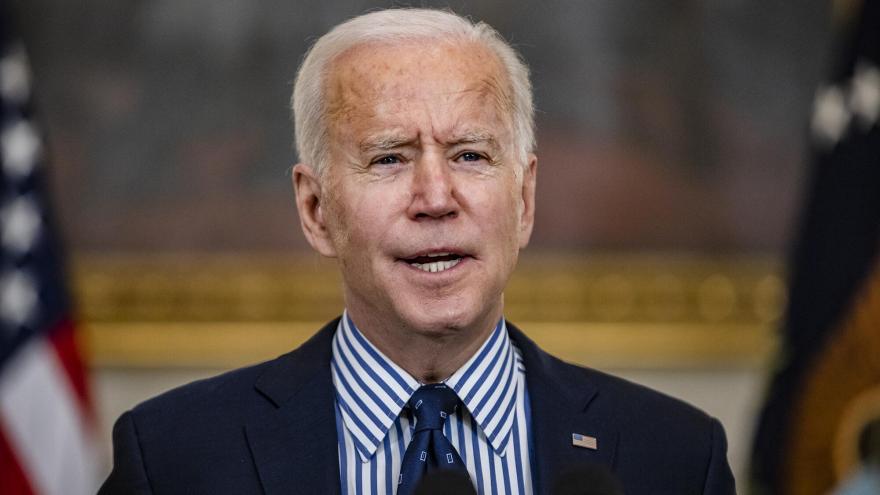 President Joe Biden pictured on March 6, in Washington, DC will announce that he is directing the US Department of Health and Human Services to purchase an additional 100 million doses of the Johnson & Johnson Covid-19 vaccine.

(CNN) -- President Joe Biden announced Wednesday that he is directing the US Department of Health and Human Services to purchase an additional 100 million doses of the Johnson & Johnson Covid-19 vaccine.

The administration and the pharmaceutical giant still need to negotiate when these 100 million doses will be available but it will likely happen later this year as Johnson & Johnson works to ramp up production.

"There is light at the end of this dark tunnel of this past year, but we cannot let our guard down now or assume victory is inevitable. Together we're going to get through this pandemic and usher in a healthier and more hopeful future," Biden said alongside the CEOs of Johnson & Johnson and Merck, which is helping to manufacture the Johnson & Johnson's vaccine under a deal brokered by the White House.

The New York Times first reported the announcement was expected.

The White House told governors Tuesday to expect fewer than 400,000 doses of Johnson & Johnson vaccine next week, far below what they initially expected would be available.

Biden announced last week that the US would have enough Covid-19 vaccine doses for every adult American by the end of May, which was a two-month acceleration of the previous timeline his administration had laid out.

This new purchase of Johnson & Johnson vaccines will not accelerate that timeline, but these doses would help build up US vaccine stock later in the year.

The new goal was made possible by a rare partnership between competitors Merck and Johnson & Johnson. The White House says it is utilizing the Defense Production Act to help equip two Merck facilities to manufacture the Johnson & Johnson vaccine.

Having enough vaccine supply by the end of May does not mean all Americans will receive shots by the end of May. Issues with distribution and personnel mean it could take much longer for all the doses to be administered.

More than 527,700 Americans have died from Covid-19 as of Wednesday morning, according to Johns Hopkins University.

The US has ramped up the administering of the three Covid-19 vaccines that have received emergency use authorization from the US Food and Drug Administration that were developed by Pfizer/BioNTech and Moderna in addition to Johnson & Johnson.

More than 93,600,000 doses have been administered in the US as of Wednesday morning, according to the US Centers for Disease Control and Prevention. The vaccines from Pfizer/BioNTech require two doses administered, while Johnson & Johnson's only requires one.

White House press secretary Jen Psaki said Tuesday that the seven-day average for shots administered is now 2.17 million shots per day, up from 890,000 shots per day on January 20, when Biden took office.

Psaki also announced that the Pfizer and Moderna Covid-19 vaccine supply will be increased to 15.8 million doses, up from 15.2 million doses announced last week. Psaki said 2.7 million first doses are also being shipped directly to pharmacies.