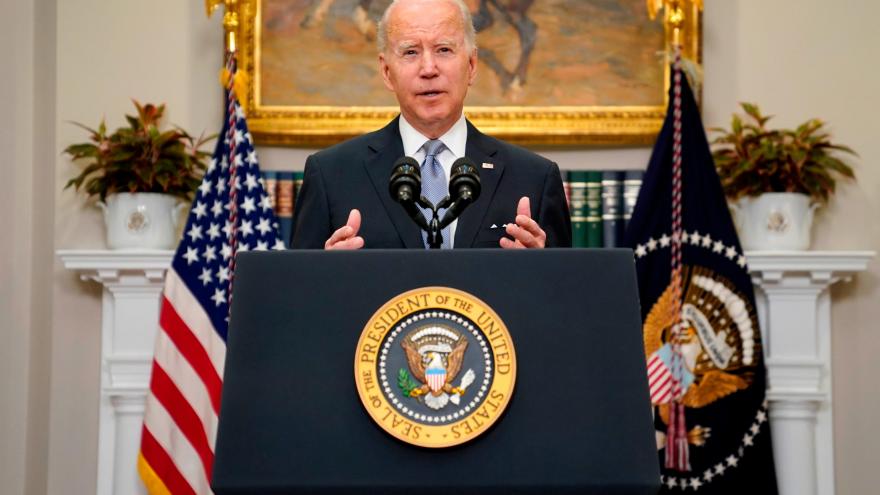 (CNN) -- President Joe Biden on Monday will announce that 20 of the nation's internet providers have committed to lowering costs for low-income households, a step the administration says will increase access to high-speed internet for 48 million households nationwide.

The announcement, which Biden is expected to make from the White House, follows provisions in the administration's bipartisan infrastructure law to subsidize wireless internet for low-income families under the Affordable Connectivity Program, which slashes internet service fees for eligible families by up to $30 a month through grant funding.

"From large providers like AT&T, Comcast, and Verizon serving dozens of states, to smaller providers serving rural areas like Jackson Energy Authority in Tennessee and Comporium in North Carolina, the commitments will allow tens of millions of ACP-eligible households to receive high-speed internet at no cost," the White House said Sunday in a fact sheet shared with CNN.

To qualify for the Affordable Connectivity Program, a member of a given household must meet certain low-income thresholds or participate in any one of the nation's assistance programs, including the Supplemental Nutrition Assistance Program (SNAP), Medicaid, the Free and Reduced-Price School Lunch Program or School Breakfast Program, Pell Grants, or others.

An estimated 11.5 million households have signed up to participate in the ACP to date.

Since taking office, the Biden administration has eyed different proposals to close the US' digital divide, which has persisted for years. The issue, however, has sparked sharp political fights over how much money to spend, where to spend it and what types of internet access Americans need to stay competitive in the 21st century.

An administration official made clear on a call with reporters Sunday that participating companies were partnering with the administration voluntarily. "I want to be clear that we didn't -- we have not offered them anything in order to make these commitments," the official said.

"We thought that it was important, in terms of providing low-cost options for millions of households, it was important to try to get these companies to reduce their prices, at least for ACP eligible households, 48 million eligible households in the country, and they did so voluntarily," the official added. "There is not a condition for any federal funding or anything like that, these are voluntary commitments from the companies, and we're grateful for that."

Comcast Cable CEO and President David Watson said in a statement that the program represents, "a historic opportunity to close the digital divide by empowering more Americans to get online and connect to our increasingly digital world."

"We have been working on digital equity issues for over a decade and believe this new program offers even more support to achieve those goals. We are proud to work together with our government and community partners to close the digital divide," Watson wrote.

Per the White House, the 20 providers participating in Monday's commitment offer coverage for 80% of the country's population and 50% of the nation's rural population.

To spread awareness, the administration will launch a new URL, GetInternet.gov, allowing eligible households to connect to internet providers and sign up for the ACP, launch outreach programs through federal programs whose beneficiaries qualify for subsidized internet, and partner with cities and states to get the word out.