Biden memorializes Tulsa victims on 100th anniversary: 'This was not a riot. This was a massacre' 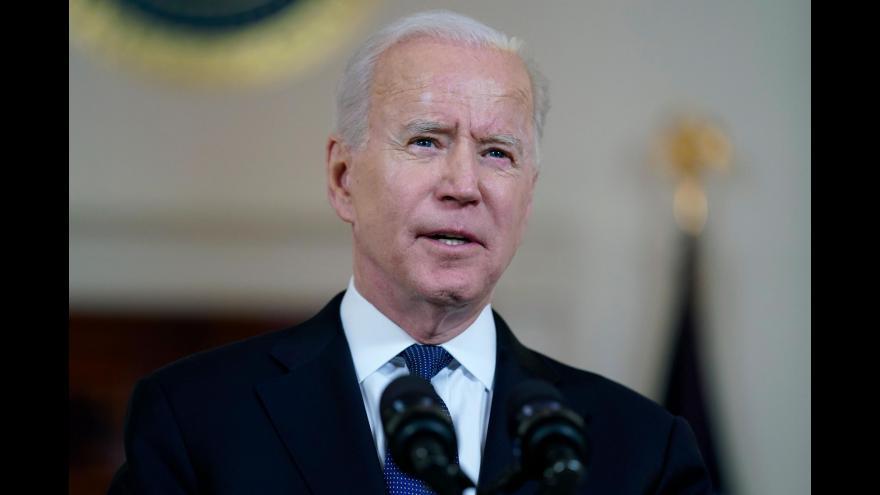 President Joe Biden will visit Tulsa, Oklahoma to mark the 100th anniversary of the Tulsa Race Massacre and announce new actions his administration will take to reduce the racial wealth gap as he commemorates one of the worst acts of racial violence in US history.

(CNN) -- President Joe Biden on Tuesday used stark language as he mourned one of the worst acts of racial violence in US history, marking the 100th anniversary of the Tulsa Race Massacre.

Biden outlined his administration's new efforts to combat the country's racial inequality during a speech in Tulsa, memorializing the hundreds of Black Americans who were killed by a White mob that had attacked their neighborhood and burned dozens of city blocks to the ground. The administration's new efforts touch on a range of issues, including small business opportunities, racial discrimination in housing and voting rights.

"One hundred years ago, at this hour, on this first day of June smoke darkened the Tulsa sky, rising from 35 blocks of Greenwood that were left in ash and ember, raised in rubble," Biden said, adding that there was no proper accounting for the dead nor any arrests made. "In less than 24 hours, 1,100 Black homes and businesses were lost. Insurance companies -- they had insurance, many of them -- rejected claims of damage. Ten-thousand people were left destitute and homeless, placed in interment camps."

Biden recounted the horrific details of the massacre that devastated Greenwood, saying "literal hell was unleashed" on the neighborhood.

"My fellow Americans: this was not a riot. This was a massacre -- among the worst in our history, but not the only one. And for too long, forgotten by our history. As soon as it happened there was a clear effort to erase it from our memory -- our collective memories," Biden said.

The President said what happened in Greenwood "was an act of hate and domestic terrorism with a through line that exists today, still." He specifically recalled the 2017 Unite the Right rally in Charlottesville, Virginia, and the insurrection at the US Capitol building this past January, calling White supremacy "the most lethal threat to the homeland today."

Biden also referenced the ongoing debate over which historical narratives around race and slavery should be taught in US schools.

"We can't just choose to learn what we want to know and not what we should know. We should know the good, the bad, the everything. That's what great nations do,"Biden said.

"There's greater recognition that for too long we've allowed a narrow, cramped view of the promise of this nation to fester -- the view that America is a zero-sum game, where there's only one winner. 'If you succeed, I fail.' 'If you get ahead, I fall behind.' 'If you get a job, I lose mine.' And maybe worst of all: 'if I hold you down, I lift myself up.' Instead of: 'if you do well, we all do well,'" he continued.

Biden also announced during his speech in Tulsa that Vice President Kamala Harris will lead the administration's efforts on voting rights, as part of the administration's ongoing work to counter efforts in Republican-led state legislatures to pass restrictive voting laws.

In Tulsa, Biden also met with surviving members of the community and toured the Greenwood Cultural Center.

The President announced that he will use federal purchasing power to grow federal contracting with small, disadvantaged businesses -- many of them minority owned -- from 10% to 15%. The White House said this will translate to an additional $100 billion over five years.

Senior administration official said that Tuesday's new efforts also include new specifics on the $10 billion community revitalization fund included in his infrastructure proposal. The fund will be targeted to economically underserved and underdeveloped communities like Greenwood, where the massacre took place a century ago.

New competitive grants totaling $15 billion will target neighborhoods where people have been cut off from jobs, schools and businesses because of previous transportation investments, officials said. And the American Jobs Plan will also invest $31 billion to support minority-owned small businesses.

Targeting discrimination in the housing market

The President also declared a new interagency effort to address inequity in home appraisal and to aggressively combat housing discrimination.

The US Department of Housing and Urban Development will publish two fair housing rules, as well as restore fair housing definitions and certifications and reinstate the department's discriminatory effects standard.

Biden is directing HUD Secretary Marcia Fudge to lead an interagency initiative to address inequity in home appraisals. This initiative will include carrying out potential enforcement under fair housing laws, regulatory action, and the development of standards and guidance in partnership with industry and state and local governments.

The administration is also laying out new specifics on the new neighborhood homes tax credit in the American Jobs Plan, which is intended to attract private investment in the development of affordable homes for low- and moderate-income homebuyers and homeowners.

The NAACP's national president, Derrick Johnson, was critical of Biden's new proposals to advance racial equity. He said they fail to address the student loan debt crisis, which he said was at the core of the racial wealth gap.

The White House on Tuesday pointed to the President's proposed investments in historically Black colleges and universities in response.

"The American Families Plan, which is included in the President's budget, includes a historic $46 billion of investments in HBCU's, tribal colleges and universities and minority-serving institutions. These institutions are critical to helping underrepresented students move to the top of the income ladder," White House principal deputy press secretary Karine Jean-Pierre told reporters aboard Air Force One.

Jean-Pierre added, "President Biden is calling for a historic investment in affordability through subsidized tuition and expanding institutional and grants."

Descendants of the Tulsa Race Massacre, which was shrouded in secrecy for decades, are still seeking justice 100 years later and calling for reparations.

Pressure has grown on Capitol Hill to deliver justice to these victims. Last month, a 107-year-old survivor of the massacre, Viola Fletcher, testified before Congress and called for justice and for the country to officially acknowledge the massacre.

"I am 107 years old and have never seen justice. I pray that one day I will," Fletcher told lawmakers. Fletcher was seven years old when she witnessed the massacre.

During his speech in Tulsa, Biden said that the story of Greenwood isn't just a story of a loss of life, but also a loss of living, wealth, prosperity and possibility. Today, Greenwood is a fraction of the size it was before the massacre. The wealthy neighborhood was never fully rebuilt and its descendants say the area never fully recovered.

In his proclamation on Monday, the President said that the laws and policies passed in the wake of the massacre made the neighborhood's recovery nearly impossible. He said the federal government needs to "acknowledge the role that it has played in stripping wealth and opportunity from Black communities."

He reaffirmed his commitment to address systemic racism in America, "to advance racial justice through the whole of our government, and working to root out systemic racism from our laws, our policies, and our hearts."

The President said his administration is addressing longstanding racial inequalities by investing in programs to provide capital to small businesses in economically disadvantaged areas, and ensuring that infrastructure projects advance racial equity and environmental justice.

In addition to the American Jobs Plan, Biden has proposed the American Families Plan, which would invest heavily in education, paid leave and child care.