Biden tests his political strength in return to the campaign trail 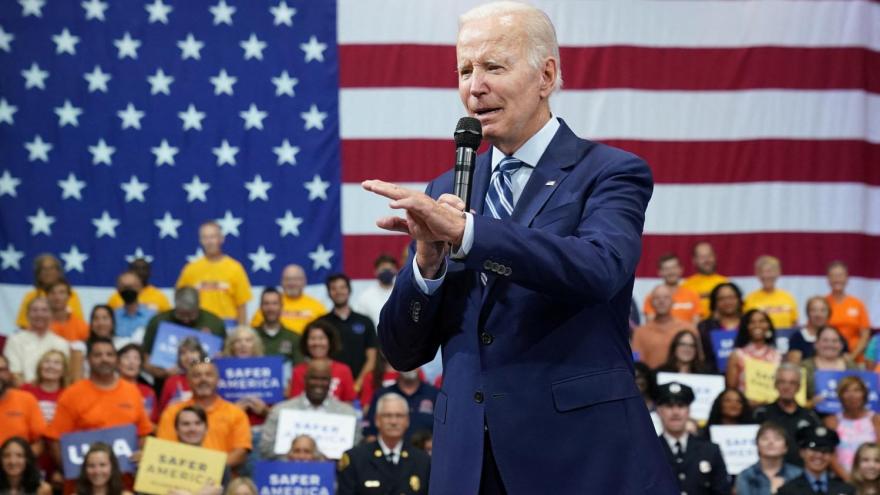 In Wisconsin and Pennsylvania on September 5, President Joe Biden is expected to herald his economic record while celebrating "the dignity of American workers" at events with organized labor. Biden is seen here in Pennsylvania on August 30.

(CNN) -- President Joe Biden has been celebrating Labor Day in Pittsburgh on-and-off for more than a decade, twice using the city's parade as a testing ground while he contemplated a presidential run.

When he returned to the city Monday, other races were front and center, including Pennsylvania's increasingly nasty Senate contest. Yet over the coming weeks, Biden's own political strength will be put to the test as he embarks upon his most intensive in-person politicking since before the Covid-19 pandemic.

In Wisconsin and Pennsylvania on Monday, Biden heralded his economic record at events with union crowds. But he also hit back at "extreme" Republicans he deemed "Trumpies" as he endeavors to render the upcoming vote not just a referendum on his own record but a choice between himself and the chaos cultivated by former President Donald Trump.

In Pittsburgh, Biden referred to his predecessor simply as "the former, defeated, President."

"Trump and the MAGA Republicans made their choice," he added later. "We can make ours: We can choose to build a better America or continue down this sliding path."

Earlier, in Wisconsin, Biden sought to differentiate between traditional Republicans and those who have rallied behind Trump.

"I want to be very clear up front. Not everyone Republican is a 'MAGA Republican.' Not every Republican embraces that extreme ideology. I know, because I've been able to work with mainstream Republicans my whole career," Biden said at Laborfest in Milwaukee to a cheering crowd of union workers.

"But the extreme MAGA Republicans in Congress have chosen to go backwards, full of anger, violence, hate and division," he said. "But together we can and we must choose a different path: forward."

Democrats hope to flip two Republican-held Senate seats in Wisconsin and Pennsylvania, and their success or failure will be viewed as a key indicator of the party's -- and Biden's -- political power ahead of the 2024 presidential contest.

Biden's own political future was the subject of anxious speculation over the summer as the 79-year-old President suffered low approval ratings and a string of setbacks. Biden's intentions remain a lingering question, though he insists he plans to run again.

Pittsburgh was where Biden headed in 2015 and 2018 as he considered previous presidential runs. Marching in the city's parade those years, he was met with enthusiastic calls of "run, Joe, run."

On his visit Monday, Biden swapped the parade for a union picnic with members of the United Steelworkers. He mingled with the crowd for a stretch before his speech, tossing a beanbag with kids and taking photos.

Before emerging into the crowd, Biden met privately with Democratic US Senate candidate, Lt. Gov. John Fetterman, who suffered a stroke earlier this year that took him off the campaign trail, in their first face to face of the campaign.

For much of the summer, it remained an open question whether Biden would be a welcome guest with Democrats or shunned by candidates looking to separate themselves from a historically unpopular president.

When Biden visited Cleveland in July to deliver an economic speech, Ohio's Democratic Senate candidate, Rep. Tim Ryan, declined to attend. He opted to campaign in another part of the state instead.

Other Democratic candidates declined to say explicitly whether they wanted Biden to join them on the campaign trial in the fall.

"I will welcome anybody to come to Arizona, travel around the state at any time. As long as I'm here, if I'm not up in Washington in session, and talk about what Arizona needs," Sen. Mark Kelly, running for reelection in Arizona, said on CNN, stopping short of directly asking Biden to come.

When Biden spoke last week in Wilkes-Barre, Pennsylvania, the Democratic gubernatorial candidate, Attorney General Josh Shapiro, appeared alongside him. And Fetterman's team confirmed nearly as soon as the White House announced Biden's trip to Pittsburgh that he would be meeting with the President.

During their meeting Monday, which lasted about 15 minutes, Fetterman pushed for Biden "to use his executive authority to begin the process of rescheduling marijuana," according to a readout provided to CNN by Fetterman spokesman Joe Calvello.

They also discussed infrastructure and "the urgent need to 'make more stuff in America,' strengthen and expand labor unions, and put more power directly into the hands of American workers," Calvello added.

When the two men emerged from the union hall together, Fetterman raised his arms and pumped his fists. But when Fetterman spoke ahead of Biden, he used the opportunity to lambast his Republican opponent, Dr. Mehmet Oz, for owning multiple homes and preparing crudités without mentioning the President.

The unofficial kickoff to the midterm campaign season has coincided with a string of policy successes for Biden and his party, easing some of the Democratic pressure surrounding the President's leadership and political acumen.

Biden hopes to use his recent victories to boost Democrats and avoid what once was viewed as an inevitable midterm drubbing. He is also betting the reminder to voters of the dysfunction surrounding Trump will benefit Democrats in November.

In Wisconsin, Biden chastised the state's incumbent Republican Sen. Ron Johnson, a top Trump ally, for downplaying the January 6, 2021, riot at the US Capitol, where Trump's supporters sought to disrupt the electoral vote count.

"Sen. Johnson said it was by and large a peaceful protest," Biden said. "Have you seen the videos what happened that day?"

Speaking in Pennsylvania later, Biden questioned the patriotism of Trump-supporting Republicans who have questioned the results of the 2020 election.

"You can't say you love the country, when ... you either win, or you have been cheated," he said. "And that's where we are now."

Biden's advisers have laid plans for the President to travel two or three times a week in the run-up to the November vote. Because his presidential bid was hampered by the pandemic, Biden has not aggressively campaigned in-person since he was competing in the Democratic primary in early 2020.

At campaign-style events over the past two weeks, Biden has demonstrated an eager willingness for the trail. During a fiery rally in Maryland, he excoriated Republicans for standing in the way of his agenda, which he touted as transformational for middle class Americans.

Later, during an official event in Wilkes-Barre, Pennsylvania, Biden called for tougher new gun laws, including a ban on assault weapons, and accused Republicans of fealty to the gun lobby.

And speaking at Independence Hall in Philadelphia last week, in what was an official White House event despite the political message, Biden issued a dire warning about "MAGA Republicans" seeking to undermine American democracy, a speech he'd been contemplating for months as he grew increasingly concerned at Trump's hold on the GOP.

Monday's events signaled a return to a more consistent theme for Biden: The importance of organized labor in building the middle class and strengthening worker protections. Biden's endorsement from key unions have helped fuel his many political campaigns, support he is consistently looking to repay.

In memos and strategy documents prepared over the month of August, Biden's team spelled out their dual-track midterm message: framing Republicans as extremists and promoting his own list of accomplishments.

His stop in Pittsburgh marked his third visit to the commonwealth in the span of a week, and his 16th stop in the Keystone State since taking office.

At his own rally in Wilkes-Barre over the weekend, Trump sought to boost his endorsed candidates but spent much of his speech railing against Biden and the FBI search of his Mar-a-Lago estate.

Trump labeled Biden an "enemy of the state" in his speech, delivered near Biden's hometown of Scranton.

"Every day, workers fight to move our country forward. And yet, we must recognize that there are those in Congress who are fighting to drag us back. In Congress, in statehouses across our nation, extremist, so-called leaders are fighting to turn back the clock," she said during remarks to the Greater Boston Labor Council's annual breakfast.

"Let's not let extremist so-called leaders turn back the clock. We know what's at stake, we know what we stand for, we know when we fight, we win, we love our country, and all of this is worth it," she said.

This story has been updated with further developments on Monday.