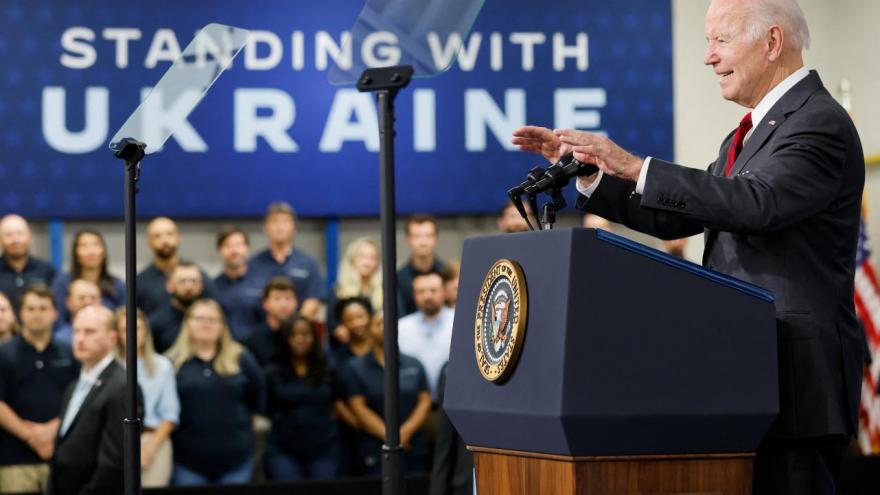 U.S. President Joe Biden, pictured here, in Alabama, on May 3, told his top national security officials that leaks about US intelligence sharing with Ukrainians aren't helpful and need to stop.

(CNN) -- President Joe Biden recently told his top national security officials that leaks about US intelligence sharing with Ukrainians aren't helpful and need to stop, according to an official familiar with the conversation.

Last week, after the White House denied providing direct intelligence to Ukrainians "with the intent to kill Russian generals," Biden spoke separately with Defense Secretary Lloyd Austin, CIA Director William Burns and Director of National Intelligence Avril Haines. He told them that it was not helpful for information to become public about what the US was sharing with the Ukrainian forces fighting the Russian invasion, an official said, and stressed that the leaks regarding such information must stop.

White House press secretary Jen Psaki on Monday told reporters the President was "displeased" with the leaks and considered them "inaccurate."

Psaki, who declined to confirm calls between the President and his team, told reporters that Biden's view "was that it was an overstatement of our role, an inaccurate statement, and also an understatement of the Ukrainians' role and their leadership, and he does not, did not, (feel) they were constructive."

Administration officials have previously insisted there are clear limits on the intelligence it shares with Ukraine, including a ban on providing precision targeting intelligence for senior Russian leaders by name. Those limits are part of a White House effort to avoid crossing a line that Moscow may view as too escalatory.

So far, Russia has not taken any known direct action against the United States or NATO in response to ongoing military and intelligence support.

US officials have been left to speculate why Moscow has held back, particularly when it comes to cyberattacks, which the US warned ahead of the war that Russia might use as retribution for US assistance. Russia has also not moved to strike Kyiv during the visits of a host of senior American leaders, from House Speaker Nancy Pelosi to Secretary of State Antony Blinken.

And the country has also not attempted to strike arms shipments flowing through Poland, a NATO nation. Only recently has Russia begun targeting railways inside Ukraine believed to be carrying Western arms to the fight.

In addition to sharing intelligence, the US has also provided billions in aid to Ukraine in its fight against Russia.

Biden has proposed a $33 billion new aid package for Ukraine, which he sent to Congress last month. The US has made it clear it intends to provide long-term support to Ukraine, and the proposed package last week was more than twice as much as the $13.6 billion infusion of military and humanitarian aid that Congress approved last month.