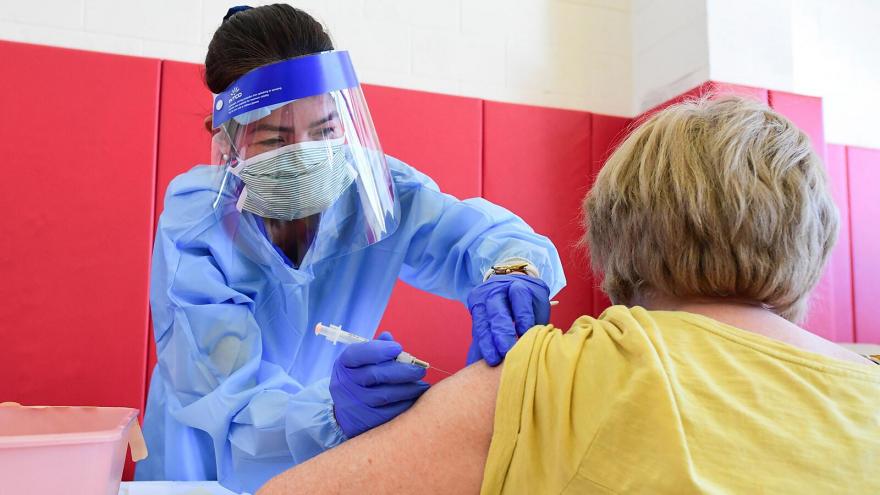 Registered nurse Irene Musni administers the COVID-19 vaccine into the arm of a senior citizen at the Corona High School gymnasium in the Riverside County city of Corona, California on January 15, 2021.

(CNN) -- Fully ensconced in the depths of the coronavirus crisis, the Biden administration says it is seeing the first signs of improvement -- though officials say they're far from celebrating.

President Joe Biden is beginning his third full week in office with the pace of vaccinations accelerating, the rate of new coronavirus cases dropping and mass vaccination sites popping up from New York to Las Vegas.

For the new administration, plenty has gone right. They've inked new deals with existing vaccine suppliers, with promising new vaccine candidates still on the horizon. They've managed in weeks what the Trump administration didn't for months: giving states a clear estimate of how many vaccine doses they'll receive. And they've thrown federal resources behind setting up large-scale vaccination sites.

But officials are aware they're in a critical period.

"It is a daunting challenge. I think it feels like we're making progress every day," Andy Slavitt, senior adviser to the White House Covid-19 Response Team told CNN.

The administration is aware of the depth of the hole they're digging out of.

Some of the success thus far owes to timing, as vaccine makers hit their stride and states smoothed out problems in distribution -- a reminder that Biden has only so much control over what happens next.

"I don't think you see a lot of people dancing in the hallways," said a Biden administration official involved in the discussions. "It's not that kind of moment."

Emerging variants of the virus and Americans congregating to celebrate the Super Bowl could easily send cases soaring again. Vaccines still need to make their way to more Americans -- of all races and income levels -- faster. And many of the steps the President hopes to take to turnaround the tandem public health and economic crises are tied to the $1.9 trillion Covid relief bill that hasn't passed Congress.

"Every direction I can see, where they have a move, they're making it," Dr. Eric Toner, senior scholar with the Johns Hopkins Center for Health Security, said of the Biden administration's progress so far.

"It's actually remarkable what the Biden administration has been able to do," Toner said. "But these are problems that are going to take months to solve."

A former Trump administration official involved in the coronavirus response said the Biden team is benefiting from the groundwork laid under ex-President Donald Trump.

One item entirely outside of the President's control has been the emergence of new variants -- first detected in the United Kingdom, South Africa and Brazil -- in the US. That has shifted the pandemic into a "different ballgame" altogether for the Biden administration, an administration official said.

Officials acknowledge "it's a big threat" that will pose setbacks to even their best-laid response plans. "I think that's the reality," the administration official said.

But while the Biden administration is racing against time to get ahead of the spread of coronavirus variants popping up across the United States, even its top health officials admit there's not enough vaccine to stay ahead of more transmissible strains like the one first identified in the UK.

"What concerns me most about these variants is we do not have a national system in place as robust to be able to track these variants as they spread across the United States," Rick Bright, a former US Department of Health and Human Services scientist under the Trump administration and a former Biden health adviser during the transition, said on CNN this week. "We're already concerned these viruses can spread more quickly, more easily. That will translate into more deaths."

Dr. Eric Topol, executive vice president of Scripps Research, said the administration should be more aggressive in scaling up surveillance of the variants and encouraging Americans to wear more protective types of masks.

"It's a monster," Topol said, particularly of the more transmissible UK strain, "and we're not going to be able to avoid it."

Biden administration officials have turned to practically pleading with Americans to mask up, maintain their distance and get vaccinated as soon as they have the chance.

"When a vaccine becomes available to you, get vaccinated," Dr. Anthony Fauci said in a recent briefing by the administration's health experts. "You will be making a major step in a positive way to protecting the community."

Shots in arms: 'How fast can we move?'

For the President, perhaps there is no more pressing question than how quickly Americans can get vaccinated.

Biden often peppers his team with questions like, "How fast can we move?" said one administration official.

So the Biden coronavirus team started off with a bang. They quickly informed states that their weekly vaccine allocations would go up by 20% and providers would receive specialized syringes to squeeze every last drop from vaccine vials.

From there, it was as though Biden's team was simply checking off the list of items health experts have demanded for months.

They ordered another 200 million vaccines from Pfizer and Moderna, coming this summer. To speed up vaccination efforts, they called in the National Guard, FEMA and active duty US troops. More federal funds were freed up for states and states were reimbursed for some of the costs they've incurred already. And after so many months of shortages in personal protective equipment, on Friday, officials said they would use the Defense Production Act to ensure the US can produce its own products, particularly surgical gloves, over the long run.

In the short term, they will use that same legal power to help Pfizer get supplies and equipment to make more of its vaccine. They're already considering steps to use it to speed up production of Johnson & Johnson's single-dose vaccine, which awaits emergency use authorization from the US Food and Drug Administration.

They are the sort of steps health experts welcome, even if they may not yield new vaccines immediately.

"As the old saying goes, the hardest part of making vaccines is making vaccines," said Dr. Paul Offit, director of the Vaccine Education Center at Children's Hospital of Philadelphia. "It's not like making men's shirts."

Amid all of this, vaccinations have been picking up. Since Biden's first full day in office, the US has been administering vaccines at an average rate of 1.4 million doses per day, according to data published by the US Centers for Disease Control and Prevention. The week before Biden took office, that rate was about 890,000 doses per day.

Experts believe that's partly due to the steps the Biden administration has taken, but also because governors and health care providers have had a couple months to iron out the process.

Still, there remains a yawning gap between the 59 million doses that have been delivered to states and the 41 million shots that have actually been administered.

When Arkansas Secretary of Health Dr. José Romero noticed his state ranking nearly last in an article about shots administered, he was flabbergasted.

"I thought we were doing a good job," said Romero, who also is chair of the CDC's advisory committee on immunization practices. "My stomach fell into my shoes and I said, 'What the heck?'"

Romero realized their files weren't going to the right place for the CDC to capture their data. After a call with the CDC, he straightened out the issue. After ironing out the confusion, Arkansas ranks 11th out of the 50 states for the share of population that has received at least one dose of vaccine, according to CDC data.

"Other states are having problems with getting their data to and from different sites," Romero said. "That's going to be a challenge."

That's the sort of tangled mess Biden's team spent their first week unwinding. They reached out to governors, state health officials and local officials to try to get a grasp on why the gulf existed between shots administered and delivered.

Since then, they have encouraged providers to move quickly to get first doses into people's arms. But they also discovered many states still have a backlog of second doses -- stockpiles that built up in the early days of the distribution effort when providers struggled to complete vaccinations quickly. Other states are still hoarding doses, unsure whether these new vaccine projections can be trusted.

"It's not like flipping a switch," a White House official said of getting states and health care providers to quickly administer their remaining stock. "I think we expect the pace to increase."

While the system to track doses once they arrive in states remains woefully lacking, state officials expect Biden's team to try to improve upon existing systems rather than create yet another one.

State and federal officials are also beginning to realize the price of speedy vaccinations may be equitable ones.

"Right now, if you want to get vaccinated it's all about how savvy you are with appointments systems and what kind of influence you have," said Dr. Marcus Plescia, chief medical officer at the Association of State and Territorial Health Officials. "Is it just about speed of vaccinations or do we want to make sure we're really being thorough?"

Early vaccine distribution data revealed that race and ethnicity data isn't being gathered frequently enough. The data that was available showed that those who were vaccinated in the first waves were most likely to be White. And studies show many Black Americans are still hesitant about getting vaccinated.

The inequality of vaccine administration is the sort of thing that keeps Biden's advisers up at night, officials said.