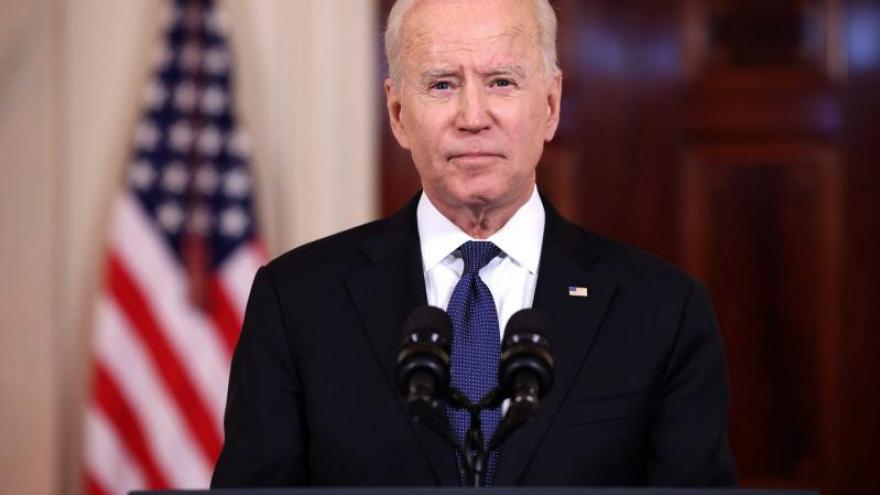 President Joe Biden has directed the US intelligence community to investigate the origins of the Covid-19 pandemic and report back to him in 90 days.

(CNN) -- President Joe Biden said Wednesday he has directed the US intelligence community to redouble their efforts in investigating the origins of the Covid-19 pandemic and report back to him in 90 days.

The announcement comes after a US intelligence report found several researchers at China's Wuhan Institute of Virology fell ill in November 2019 and had to be hospitalized -- a new detail that fueled fresh public pressure on Biden to delve deeper into the origin of the virus.

"As part of that report, I have asked for areas of further inquiry that may be required, including specific questions for China. I have also asked that this effort include work by our National Labs and other agencies of our government to augment the Intelligence Community's efforts. And I have asked the Intelligence Community to keep Congress fully apprised of its work," Biden said in a statement.

The President said: "The failure to get our inspectors on the ground in those early months will always hamper any investigation into the origin of COVID-19."

Biden said in the statement that in March he directed his national security adviser, Jake Sullivan, to task the intelligence community with preparing a report on the most up-to-date analysis of the origins of the Covid-19 pandemic, including whether the virus emerged from human contact with an infected animal or from a laboratory accident. Biden said he received that report earlier this month and asked for additional follow-up.

"As of today, the U.S. Intelligence Community has 'coalesced around two likely scenarios' but has not reached a definitive conclusion on this question. Here is their current position: 'while two elements in the IC leans toward the former scenario and one leans more toward the latter -- each with low or moderate confidence -- the majority of elements do not believe there is sufficient information to assess one to be more likely than the other,'" Biden said in the statement.

That's essentially the same public determination that the intelligence community has had for more than a year about the origins of Covid-19 though Wednesday's statement does make clear that these two scenarios are "likely" and not just being investigated. CNN reported in April 2020 that the intelligence community was investigating if the novel coronavirus spread from a Chinese laboratory rather than a market in Wuhan, China. The Chinese government has maintained that the virus originated and spread naturally.

A series of factors went into Biden's decision to task his intelligence community with a deeper dive into the origins of Covid-19, including the thinking that the initial March-ordered report didn't go far enough in delving into the issue, according to a source familiar with the decision.

Biden viewed Wednesday's statement, and additional review, as in the compelling public interest given the scale of the devastation wrought by the pandemic, the source said.

There was also clear public pressure on the administration to address the issue after recent Wall Street Journal and CNN reporting on new information that underscored the plausibility of the lab theory, as well as new comments by Dr. Anthony Fauci -- Biden's chief medical adviser -- that acknowledged he and other scientists may have been too definitive in previous public statements dismissing that possibility.

Pressure has heightened from Congress as well.

Democratic Sen. Patty Murray of Washington, the chair of the Senate Health, Education, Labor and Pensions Committee, on Wednesday called for "clear answers" from the intelligence community on the origins of coronavirus and said her panel would explore any additional options it could take.

Also on Wednesday, legislation backed by Republican Sens. Josh Hawley of Missouri and Mike Braun of Indiana passed by unanimous consent requiring the Biden administration, specifically Director of National Intelligence Avril Haines, to declassify any intelligence relating to links between the Wuhan Institute of Virology and the origins of the Covid-19 pandemic.

Last month, Haines testified that US intelligence agencies still do not know "exactly where, when or how Covid-19 virus was transmitted initially" in China but remain focused on two primary theories, that "it emerged naturally from human contact with infected animals or it was a laboratory accident."

Two sources told CNN on Sunday that assessment has not changed.

Biden said the US would work with allies to continue to press China "to participate in a full, transparent, evidence-based international investigation and to provide access to all relevant data and evidence."

When asked during a White House briefing if the announcement was related to the recent US intelligence report on the researchers falling ill, principal deputy press secretary Karine Jean-Pierre told reporters on Wednesday the issue is "something that the President has been working on for some time."

"We have been saying that for a very long time that China needed to provide more access to the lab, cooperate more fully with the scientific investigators, and we don't think that they have met that standard," Jean-Pierre told CNN.

She added: "Getting to the bottom of the origin of this pandemic will help us understand how to prepare for the next pandemic and the next one."

CNN reported on Tuesday that Biden's team shut down a closely held State Department effort launched late in the Trump administration to prove that Covid-19 originated in a Chinese lab over concerns about the quality of its work, according to three sources familiar with the decision.

The decision to terminate the inquiry, which was run primarily out of the State Department's arms control and verification bureau, was made after Biden officials were briefed on the team's draft findings in February and March of this year, a State Department spokesperson said.

The Wall Street Journal was first to report the intelligence surrounding the earlier hospitalizations.

That State Department investigation that was shut down is separate from the intelligence community's investigation, which has never stopped. US intelligence agencies have continued to examine whether the virus emerged naturally from human contact with infected animals or if it could have been the result of a laboratory accident.

The World Health Organization conducted an investigation into the origins of the pandemic and concluded in a report that the risk of an accidental leak from the Wuhan Institute, where coronavirus research was being conducted on bats, was "extremely low." The report said there was "no reporting of Covid-19 compatible respiratory illness during the weeks/months prior to December 2019, and no serological evidence of infection in workers through SARS-CoV-2-specific serology-screening."

But the WHO probe was criticized by the US, United Kingdom and other governments over its limited access to "complete, original data and samples." The organization was also accused of being overly deferential to China throughout the course of the study. The study was co-authored by 17 Chinese scientists, several of them from state-run institutions.

When the WHO report was released in March, the group's Director-General Tedros Adhanom Ghebreyesus said in statement that the report was the beginning, not the end of the investigation into the source of the virus.

"We have not yet found the source of the virus, and we must continue to follow the science and leave no stone unturned as we do," the WHO Director-General said in a statement.

As Biden administration officials were working through the exact next steps, it had become exceedingly clear through public statements as recently as Tuesday at the World Health Assembly meeting that the Chinese government had no intention of engaging on the WHO's second phase of their investigation.

While there was no sense the Chinese would reverse course and be transparent, Biden's public comments served to drive heightened interest inside the administration to take additional steps unilaterally to investigate the origins of the virus.

The President has directed agencies and National Labs to work closely with the intelligence community on its 90-day deep dive, even as they continue to push for a more fulsome WHO investigation.