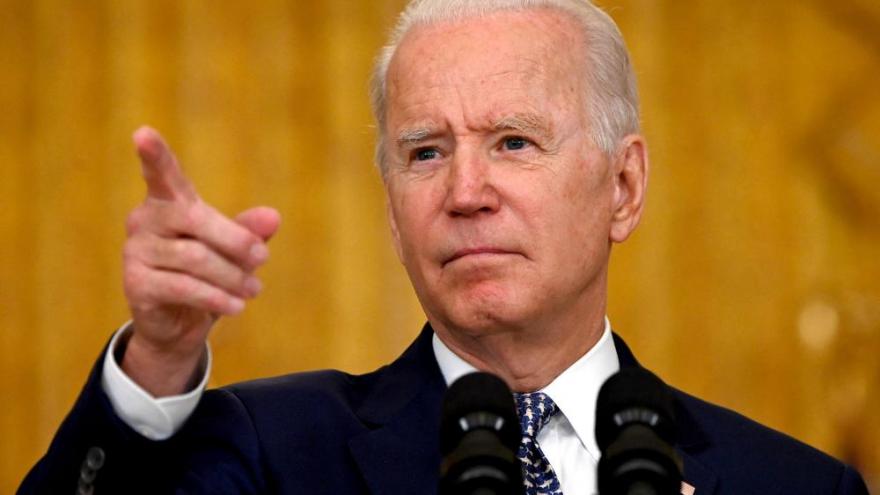 For months, the FDA has served under the leadership of an acting commissioner, Dr. Janet Woodcock, as President Joe Biden has struggled to find a candidate who can win Senate confirmation.

(CNN) -- The US Food and Drug Administration is on the cusp of approving the nation's first Covid-19 vaccine without a permanent leader at the helm, and a nomination doesn't appear to be in sight.

For months, the agency at the forefront of the coronavirus response has served under the leadership of an acting commissioner, Dr. Janet Woodcock, as President Joe Biden has struggled to find a candidate who can win Senate confirmation.

It's not for a lack of trying. For months, Biden's top aides have considered several possibilities for the top job, but have ultimately come up short.

In recent weeks, the search has languished as officials decided the pushback to making Woodcock the permanent commissioner is too strong. She has come under scrutiny from critical votes like Sen. Joe Manchin, a moderate Democrat from West Virginia, for how liberally the FDA approved opioids when she ran the drug division within the agency. Manchin's state has been ravaged by opioid addiction.

Two officials said it could be "weeks" before Biden settles on anyone.

The search has been wide-ranging, with officials inside the West Wing and Biden's outside advisers all searching for possible contenders. They have, at times, considered the acting commissioner, former Obama officials and outside public health experts. At one point, one outside adviser even reached out to Dr. Stephen Hahn, the FDA commissioner under former President Donald Trump, to gauge his opinion about prospects.

"We're working on that very hard to make sure we can get it passed," Biden said Tuesday when asked why no permanent director has been named yet.

"He wants to name someone who's qualified, who's ready to lead the FDA. It is a priority for him. He's also not going to take a step to put forward a nominee before he's found exactly the right person," Psaki said.

She added, "I will note that it is a place that is filled with talented experienced scientists data experts career staff who are certainly running the FDA effectively."

At the heart of the search is selecting a nominee not only qualified for the specific skill set that comes with being FDA commissioner but who can also secure enough approval to get confirmed, a task that has proved harder than expected for the White House.

The pressure to name a permanent commissioner has only increased as the FDA nears formal approval for the Pfizer-BioNTech coronavirus vaccine, which officials have predicted could happen in the coming weeks.

As he delicately balances his pledge to keep politics out of the FDA after his predecessor eroded morale at the agency, Biden has made clear he is eager to see the FDA approve vaccines.

"God willing, the FDA is going to be coming out in a reasonable timeframe to say this vaccine is totally safe," Biden said Tuesday.

Officials within the agency say teams are working as quickly as possible to get the vaccine approved in record time. While Pfizer-BioNTech started submitting data for the review process in April, it operated on a rolling basis until mid-July.

The agency has bought in additional "sprint teams" that focus on one project at a time, as opposed to the multiple projects that people at the FDA typically work on all at once. The experts who come from across all the offices at the FDA are helping to support the biologics officials who will make the decision to grant approval. Those officials have worked endless hours, including weekends, as they have pored over data. The effort involves hundreds of FDA employees, according to an FDA official.

"We have taken an all-hands-on-deck approach, including identifying additional resources such as personnel and technological resources from across the agency and opportunities to reprioritize other activities, in order to complete our review to help combat this pandemic surge," an FDA spokesperson told CNN Wednesday. "In this regard, Dr. Woodcock has reiterated her appreciation for the diligence and integrity to this process and offered all agency resources to the team to make this happen."

The applications require a strict scrutiny of millions of pages of documents. In addition to examining the company's data, the FDA does its own analysis to verify the numbers as well as sign off on the manufacturing procedures, and then goes through a secondary and tertiary review.

"Once you approve a drug, that's it," one health official told CNN. "That's the ballgame."

The FDA commissioner does not make the ultimate decision to grant approval to a vaccine. While the commissioner oversees the agency, the authority for vaccine approvals has been delegated for years.

The Covid-19 vaccine approval decision will be made by the Center for Biologics Evaluation and Research Office for Vaccines Research and Review, along with the Office of Biostatistics, the Office of Compliance and others.

However, Woodcock -- while in her acting capacity -- has made clear in internal conversations that it's a top priority, according to an administration official.

"The role of FDA commissioner is critically important, especially during the Covid-19 pandemic," a White House spokesman said. "We have strong acting leadership in place that is playing an important role in our Covid-19 response and beyond, and look forward to sharing a nominee with the requisite expertise and leadership for this job."

Woodcock has long been a respected leader among many within the agency, and even as acting commissioner she still has the full force and power to guide the agency, said George Karavetsos, who had been the director of the FDA's Office of Criminal Investigations and now provides strategic advice to FDA regulated companies.

Having been detailed to the White House to work on Covid-19 vaccines through Operation Warp Speed and also having been the director of the Center for Drug Research and Evaluation, Woodcock is uniquely well-qualified to lead on the vaccine issue, he said.

"I can't think of anybody who would be better positioned to the be the tip of the spear for the vaccine," Karavetsos said. "There has been no letup on the gas with her in an acting capacity."