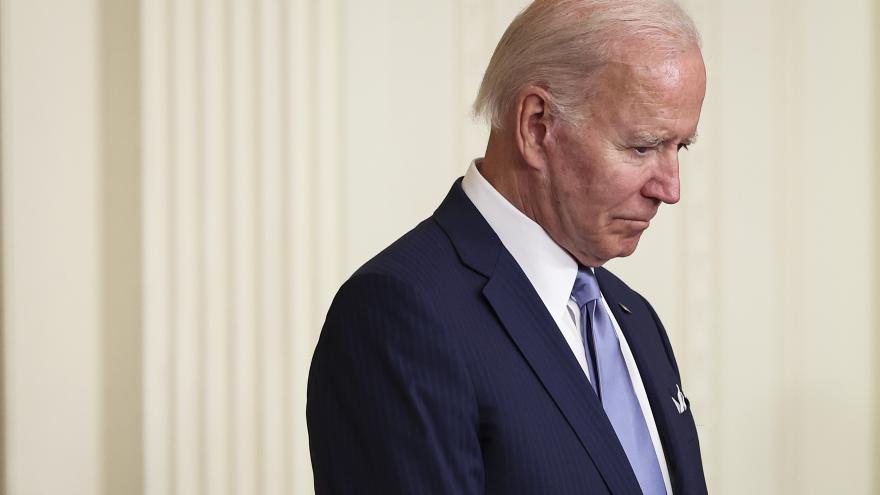 (CNN) -- President Joe Biden on Friday spoke with Paul Whelan's sister about the former Marine's detainment in Russia and "reaffirmed that he is committed to bringing Paul home as soon as possible," according to a statement from a White House official.

"Today, President Biden called Elizabeth Whelan, the sister of Paul Whelan who has been wrongfully detained by Russia since 2018. President Biden reaffirmed that he is committed to bringing Paul home as soon as possible, and the U.S. government will continue its efforts to secure the release of Paul as well as Brittney Griner and all other Americans who are held hostage or wrongfully detained around the world," the White House official said.

"The U.S. government will continue to be in regular contact with Paul's family, and with the families of other Americans held hostage or wrongfully detained abroad, to provide support and assistance and keep them updated on efforts to secure the release of their loved ones," the White House official continued.

Elizabeth Whelan said Saturday she was "surprised" by the call from the President, who assured her "that the US government was doing all it could to bring about Paul's safe return from his wrongful detention in Russia," according to a statement issued on behalf of the Whelan family.

"We spoke for several minutes and I was touched by the President's obvious concern and empathy for Paul's plight and the Whelan family's distress," she said.

In an interview with CNN Wednesday, Elizabeth Whelan had questioned why Biden hadn't spoken with her family after the President raised her brother's case in a call with Griner's wife. Whelan and Griner, a WNBA star and two-time US Olympic basketball gold medalist, are both currently detained in Russia.

The Whelan family said Saturday it was grateful to Biden for making the call, adding that it's "reassuring and we remain confident that his Administration is doing what it can for Paul."

"We hope that their determined effort will yield some result and that Paul will soon be home," the family said.

But the family added that the "President's call doesn't really change anything: hard work is occurring but it hasn't yet borne a result. We will work and pray for that result to come as quickly as possible."

Paul Whelan was detained at a Moscow hotel in December 2018 and arrested on espionage charges, which he has consistently and vehemently denied. He was convicted and sentenced in June 2020 to 16 years in prison in a trial US officials denounced as unfair.

Biden and Vice President Kamala Harris spoke by phone Wednesday with Griner's wife, Cherelle, and the President also wrote a letter in response to the WNBA star's handwritten letter to him.

Cherelle Griner said at a news conference Friday that Biden had understood the letter written to him by her wife and that "he sees her as a person."

Brittney Griner, who was arrested in February at a Moscow airport after Russian officials say they found cannabis oil in her luggage, pleaded guilty to drug charges on Thursday.

The US State Department has classified her wrongfully detained, and she faces up to 10 years in prison.

The renewed calls for Whelan's and Griner's release come just a few months after US citizen and former Marine Trevor Reed, who had been detained in Russia since 2019, was released in a prisoner swap deal.

He had been sentenced to nine years in prison in July 2020 after being accused of endangering the "life and health" of Russian police officers. Reed's deteriorating health, his family's consistent activism which led to a meeting with Biden, and the situation in Ukraine -- led Biden to authorize the prisoner swap in April.

Upon his release, Reed's family told CNN, "He said, 'I feel horrible about being home and not having Paul here.' He said, 'I don't understand why I'm here and Paul's not.'"