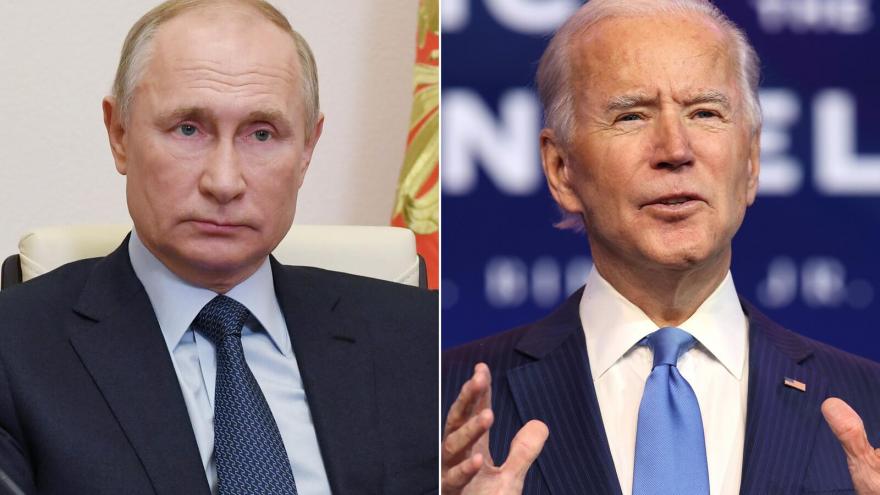 (CNN) -- President Joe Biden held his first call Tuesday with his Russian counterpart, according to the White House, confronting President Vladimir Putin over a range of issues from a recent massive cyberattack to the suspected poisoning of the country's leading opposition figure.

The call, which occurred midday, amounted to Biden's opening bid at diplomacy with one of his chief adversaries, whom he has met previously but not dealt with as an equal.

Biden's press secretary Jen Psaki said he entered the phone call with the intention of discussing the New START nuclear treaty, which the Biden administration hopes to extend; Russian aggression in Ukraine; the Solarwinds cyber hack, the extent of which is still being determined; reports Russia placed bounties on American troops serving in Afghanistan; Moscow's interference in US presidential elections; and the poisoning of Alexei Navalny.

"His intention was also to make clear that the United States will act firmly in defense of our national interests in response to malign actions by Russia," Psaki said, noting the call had taken place during her briefing and that a more fulsome summary would come later.

The lengthy list of topics for Biden's first conversation with Putin illustrates the troubled state of affairs between Washington and Moscow that he inherited from the previous administration. Biden has accused his predecessor, President Donald Trump, of being too weak on Russia, accusing him of being "Putin's puppy" during one of their general election debates.

Biden hopes to take a firmer line with Putin, officials have said. He's ordered a review from administration agencies on issues related to Russia and could impose new sanctions on the country.

But he's also made an opening bid for diplomacy on the nuclear treaty, suggesting he is open to fostering a working relationship with Putin.

"I find that we can both operate in the mutual self-interest of our countries, as a new START agreement, and make it clear to Russia that we are very concerned about their behavior, whether it's Navalny, whether it's the Solar Winds or whether it's reports of bounties on the heads of Americans in Afghanistan," he told reporters on Monday.

"I have asked the agencies in question to do a thorough read for me on every one of those issues, to update me precisely where they are, and I will not hesitate to raise those issues with the Russians," he said.

Tuesday's call came at Moscow's request, according to a person familiar with the matter, who said Biden wanted to confer with leaders in Europe and his advisers before getting on the phone with Putin. The Kremlin requested the call shortly after Biden took office last week, which is standard for foreign leaders who are hoping to speak with the new president.

Biden received a series of briefings ahead of the call from senior administration officials going over administration positions and Putin's likely responses when Biden raised issues like the Solarwinds hack and the Navalny poisoning, the person said.

Biden's predecessor often entered his calls with Putin having not prepared and on at least one occasion disregarded the advice of his advisers not to congratulate Putin on winning his election.

Biden also spoke Tuesday with Jens Stoltenberg, the secretary general of NATO, a symbolic conversation given the defense bloc's role in defending against Russian aggression in Europe.

Biden has also spoken with the leaders of France, Germany and the United Kingdom, including on issues related to Russia.

Putin was one of the last world leaders to congratulate Biden upon winning the presidency, waiting until it was clear Trump had lost the Electoral College count to offer formal regards.

The two men met when Biden was vice president and he visited Moscow. During a tour of Putin's office, Biden later claimed he told the Russian leader, inches from his face, that he did not believe he had a soul.