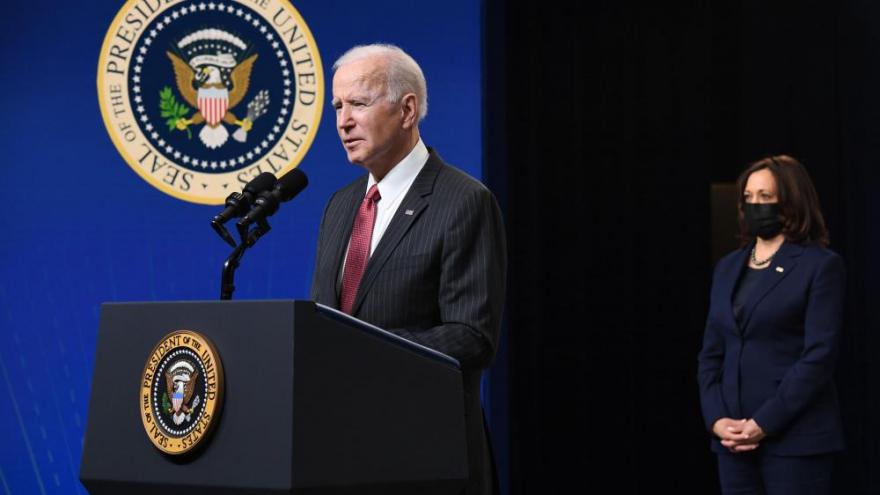 President Joe Biden spoke with China's President Xi Jinping late Wednesday, their first call since Biden took office. In this image, Biden speaks about the situation in Myanmar on February 10, in Washington, DC.

"Last night, I was on the phone for two straight hours with Xi Jinping," Biden said Thursday as he met with a bipartisan group of senators to discuss infrastructure in the Oval Office.

"And you all know as well as I do, these folks -- and it was a good conversation I know him well we've spent a lot of time together over the years I was vice president. But, you know, if we don't get moving, they're going to eat our lunch," he added, outlining China's efforts to invest in rail and other transportation.

The introductory call between the leaders of the world's two largest economies touched upon a range of issues against the backdrop of escalating tensions between the two countries.

Biden prioritized economic and military issues, and mentioned potential areas of cooperation, including climate change and nuclear proliferation, while calling China out on a range of issues related to its nefarious use of technology, unfair trade and human rights abuses, the senior official said.

The official said prior to the call that Biden would also call Xi out on human rights abuses of China's Muslim minority Uyghurs and hostile actions toward Hong Kong.

Biden planned to "indicate that this isn't just about American values, it's about universal values," the senior official said before the phone call.

A White House readout of the call released Wednesday evening said Biden "affirmed his priorities of protecting the American people's security, prosperity, health, and way of life, and preserving a free and open Indo-Pacific."

Biden, the readout added, "underscored his fundamental concerns about Beijing's coercive and unfair economic practices, crackdown in Hong Kong, human rights abuses in Xinjiang, and increasingly assertive actions in the region, including toward Taiwan."

The administration is planning a sweeping review of the Trump administration's posture toward China, including its crackdown on unfair trade practices and antagonistic military activities in Asia, all while acknowledging pursuing a robust Indo-Pacific strategy, according to an administration official. This means embracing China where possible, while calling it out in other matters, such as its human rights abuses.

One thing that will remain in place is the Trump administration's tariffs on China.

"We have maintained the tariffs that were laid down over the course of the past few years, not because we think that that trade war was particularly successful, but rather because we believe that we have to very carefully, in consultation with allies and partners, in consultation with the Congress, work through the sources of leverage we have," the senior official said.

Administration officials have also condemned China's attacks on pro-democracy protesters in Hong Kong. Last week, the US Navy also sent a guided-missile destroyer through the Taiwan Strait, the first time during the Biden administration a US warship has gone through the waterway that separates China and Taiwan.

The official said that the Biden administration found "deep problems" with the way in which the Trump administration had approached competition with China, and it is one of the issues they are now reviewing as part of a broader China policy.

Biden announced Wednesday that the Department of Defense has established a task force focused on US strategy toward China.

"Today I was briefed on a new DoD-wide China task force that Secretary Austin is standing up to look at our strategy and operational concepts, technology and force posture and so much more," the President said as he visited the Pentagon for the first time since he was inaugurated.

Biden said the task force would draw on civilian and military experts across the Department of Defense and would provide recommendations to Austin "within the next few months" on "key priorities and decision points."

"It will require a whole government effort, bipartisan cooperation in Congress, and strong alliances and partnerships. That's how we'll meet the China challenge and ensure the American people win the competition of the future," Biden said.

While Biden had engaged with Xi in his role as vice president, the call was their first leader-to-leader engagement.

Biden "obviously spent a lot of time with Xi Jinping over the years although this will be their first leader-to-leader call," the senior official said before the call.

"He knows what he wants to lay down with regard to China's actions and policies" and wants to ensure "open lines of communication ... so we can work through challenges," the senior official added.