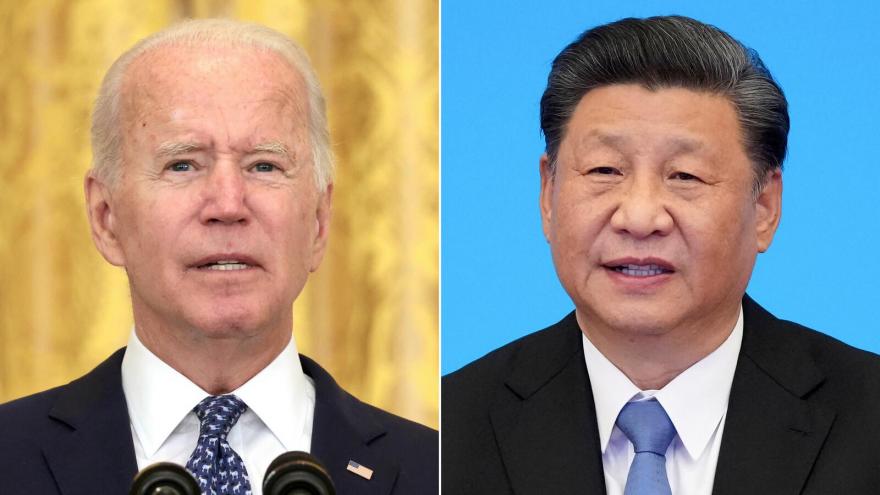 (CNN) -- President Joe Biden spoke with China's President Xi Jinping on Thursday evening as relations between the two countries have remained tense in recent months, particularly in cyberspace, with the US having accused China of widespread malfeasance, including a massive hack of Microsoft's email system and other ransomware attacks.

"The two leaders had a broad, strategic discussion in which they discussed areas where our interests converge, and areas where our interests, values, and perspectives diverge," said a readout of the call, provided by the White House. "They agreed to engage on both sets of issues openly and straightforwardly. This discussion, as President Biden made clear, was part of the United States' ongoing effort to responsibly manage the competition between the United States and the PRC."

Biden addressed cyber issues during the roughly 90-minute conversation, and generally sought to have a "broad and strategic discussion" about how to manage the competitive US-China relationship to avoid veering into conflict, according to a senior administration official who spoke with reporters before and after the call. The official described the tone of the call, which Biden took from the Treaty Room of the White House residence, as "respectful" and "familiar and candid."

White House press secretary Jen Psaki confirmed Friday that the pair also discussed the issue of the Covid-19 pandemic's origin and China's unwillingness to allow an investigation into the matter, though she declined to elaborate on what was said.

"It was a topic raised, but I'm not going to go into further details," Psaki said during a White House press briefing, adding that the US position -- China should allow World Health Organization personnel to investigate -- has been clear.

The Biden administration has signaled that it plans to continue taking a tough approach to China -- similar to former President Donald Trump -- but that it will do so in coordination with allies, and hopes to set parameters that allow the countries to voice concern and areas of disagreement but also work with each other when it is in both countries' interest.

According to Chinese state media Xinhua news, Xi told Biden that America's policy towards China has caused "serious difficulties" for the countries' relations.

The Chinese leader said the two countries can continue dialogue to "promote the coordination and cooperation" on issues such as climate change, Covid-19 and other international issues.

The call marked the leaders' second time speaking since Biden became President, with the first call about seven months ago. During their first call, Biden laid out parameters on engagement, but China has not engaged with working-level US officials in a way that has "satisfied" the Biden administration.

During the Biden administration's first face-to-face with Chinese officials earlier this year, the two sides traded diplomatic barbs that are rarely displayed in front of the cameras. Biden officials said they planned to address areas of deep concern regarding China's actions, which triggered an aggressive response from the Chinese officials.

"We continue to believe that setting parameters and guardrails for the competition, and maintaining open lines of communication, is really important. But these lower-level engagements have not been very fruitful, and, candidly, we've not been very satisfied with our interlocutors' behavior," the senior official said prior to the call. "Given this reality, and you know what has been our consistent approach from the get-go about responsible management of the competition, about lines of communication, President Biden understood the importance of engaging President Xi directly on these issues."

The official added that "it's quite likely that engagement at the leader level is really what's needed to move the ball forward," given Xi's centralized power.

The guardrails for the relationship that Biden was expected to discuss on Thursday included open lines of communication, substantive and frank dialogue, and committing to not creating linkage between issues within the relationships, the official said.

When it comes to specific matters of tension between the two countries, the official did not provide a fulsome list but said North Korea and Iran could be discussed in the context of broadly discussing the relationship.

The overall goal, the official said, was to reach a "steady state of affairs with the United States and China." But that will be a tall task, given that Biden has framed the US-China competition in recent months as a battle between democracy and autocracy.

On the topic of Afghanistan and the Taliban, the official said the administration did not expect Biden to make a "particular ask" of China, and following the call, the official would only say the leaders talked about "global events."

Earlier this week, China announced it would provide almost $31 million worth of food, winter weather supplies, vaccines and medicine to the Taliban-controlled country and would maintain its embassy there.

US officials say they still hope to set up an in-person meeting between Biden and Xi Jinping, but aren't sure it will occur on the sidelines of the G20 at the end of October. That is primarily because Xi, who has not left China in roughly 600 days -- since before the start of the pandemic -- has not confirmed he will attend the summit in Rome.

It's possible Xi participates in the summit virtually, and US officials aren't ruling out a virtual meeting between Biden and his counterpart.