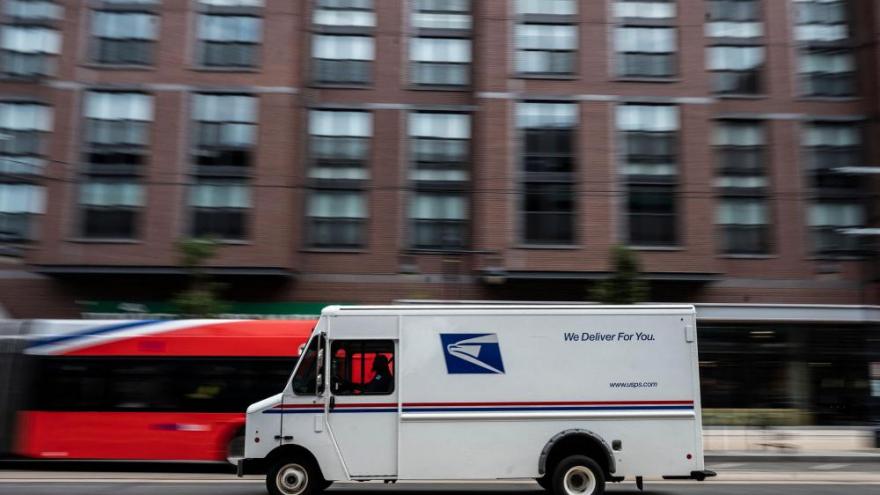 Two measures would save the USPS nearly $50 billion over the next decade, according to the House Oversight Committee.

(CNN) -- President Joe Biden signed a sweeping bill into law on Wednesday that will overhaul the US Postal Service's finances and allow the agency to modernize its service.

Biden, ticking through the reforms included in the bipartisan bill, noted that it sets the Postal Service on a more "sustainable and stable financial footing."

The new law will require retired postal employees to enroll in Medicare when eligible and repeals a previous mandate for the agency that forced it to cover health care costs up front and years in advance. Those two measures would save the USPS nearly $50 billion over the next decade, according to the House Oversight Committee.

The legislation also requires the Postal Service to create an online public dashboard with local and national delivery and performance data, as well as allow USPS to work with local governments to offer other helpful non-postal services.

"Today, we enshrined into law, our recognition that the Postal Service is fundamental to our economy, to our democracy, to our health, and the very sense of who we are as a nation," Biden said to an audience at the White House filled with members of Congress from both sides of the aisle.

Unlike other government institutions, the US Postal Service must rely on revenue it collects from deliveries, not taxpayer funding, to support itself. This means that the agency, established in 1775, must operate without the usual financial benefits of being a federal agency while still having to bear those costs.

In his remarks, the President praised the Postal Service for keeping people and communities across the nation connected, noting its long history as one of the government's oldest agencies and its most recent efforts to deliver free Covid-19 at home test kits to millions of households.

"The Postal Service stepped up to make that happen as well, and now they've delivered over 320 million Covid-19 test kits so far," Biden said. "Impressive turnaround for an unprecedented task and it's continuing to truly heroic service that you've provided throughout this pandemic."

The new law comes after years of increasing warnings about the state of the agency.

Most recently, Postmaster General Louis DeJoy said that USPS' "dire financial condition" has inhibited the service from modernizing, including from replacing the vast majority of its aging vehicle fleet with electric trucks.

DeJoy said last year that longer first-class mail delivery times and cuts to post office hours across the country are among the changes in his 10-year plan for the agency.

Before heading to the President's desk, the Postal Service Reform Act enjoyed a rare wave of bipartisan support, easily clearing the Senate in a 79-19 vote after passing in the House 342-92.

The co-sponsors of the legislation -- which included Democrats, Rep. Carolyn Maloney and Sen. Gary Peters, as well as Republicans, Rep. Jim Comer and Sen. Rob Portman -- praised the bill signing.

"This historic law will finally get the Postal Service on sustainable financial footing after decades of decline," said Maloney, a New York representative. "I am proud to have negotiated this bill across party lines and to have worked hand-in-hand with Ranking Member Comer, Chairman Peters, and Ranking Member Portman."

Comer, who represents Kentucky, said the new law "will strengthen USPS for the years to come." And Portman, a senator for Ohio, said that when paired with USPS' 10-year plan, the new law will help put the agency on a "more sustainable financial footing and support the goal of providing long-term reliable service across the country."

Peters, who represents Michigan, called the new law a "momentous achievement that shows when lawmakers put their differences aside and work together, we can deliver meaningful results for the American people."