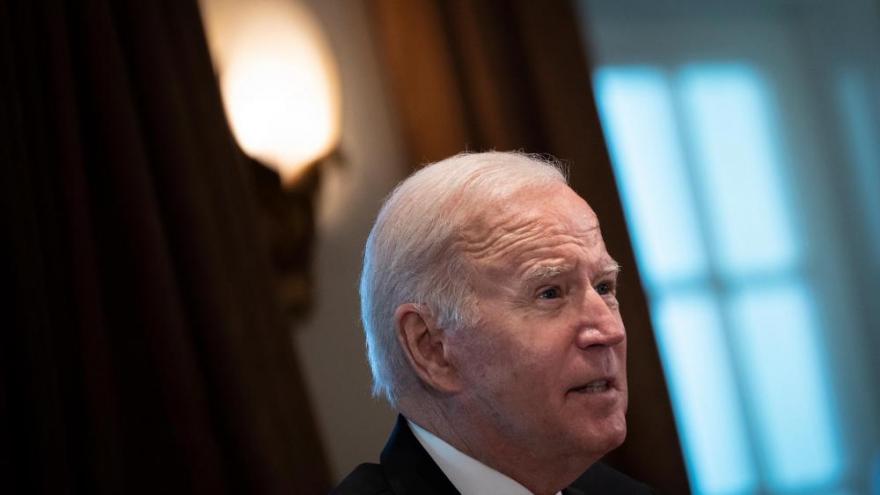 President Joe Biden signs the $1.2 trillion bipartisan infrastructure package into law Monday afternoon, seeking a jolt of momentum for his presidency as he commemorates a major legislative victory with pomp and circumstance on the White House South Lawn. Biden is shown here at the White House November 12, 2021 in Washington, DC.

(CNN) -- President Joe Biden on Monday signed into law a $1.2 trillion bipartisan infrastructure package and marked the major legislative victory at a White House event with lawmakers from both parties.

"The bill I'm about to sign into law is proof that despite the cynics, Democrats and Republicans can come together and deliver results. We can do this. We can deliver real results for real people," Biden said, speaking from the South Lawn at the White House.

The President said: "We're taking a monumental step forward to build back better as a nation."

"Here in Washington, we've heard countless speeches and promises and white papers from experts. But today we're finally getting this done. So my message to the American people is this: America's moving again, and your life is going to change for the better," Biden said.

The ceremony comes as Biden is facing slumping poll numbers ahead of next year's critical midterm elections following a bruising gubernatorial loss for Democrats in Virginia earlier this month. Discontent over the pandemic and resulting economic problems -- including record inflation -- are contributing to Biden's lagging popularity. A new ABC-Washington Post poll out over the weekend put the President's approval rating at 41% approve, 53% disapprove.

Biden thanked and praised several senators who were key to the bill's passage, including Republican Sen. Rob Portman of Ohio and Democratic Sen. Kyrsten Sinema of Arizona, who both spoke at the event. The President called Portman a "hell of a good guy" and joked that his praise of the Republican would not hurt Portman since he isn't running for reelection in 2022.

Notably, Biden also thanked Senate Minority Leader Mitch McConnell, who did not attend the signing ceremony, "for voting for this bill and talking about how useful and important it is."

The President thanked several other top Democrats in the House, including Speaker Nancy Pelosi, and recognized several committee chairs, ranking members and governors. He also thanked organized labor, "who understands this is about jobs. Y'all stood up. Jobs, jobs, jobs, jobs."

The legislation will deliver $550 billion of new federal investments in America's infrastructure over five years, including money for roads, bridges, mass transit, rail, airports, ports and waterways. The package includes a $65 billion investment in improving the nation's broadband infrastructure and invests tens of billions of dollars in improving the electric grid and water systems. Another $7.5 billion would go to building a nationwide network of plug-in electric vehicle chargers, according to the bill text.

"This law is a blue-collar blueprint to rebuild America. It leaves no one behind and marks an inflection point that we face as a nation," Biden said.

"We compromised. We reached a consensus. That's necessary. Now our focus moves to implementing an infrastructure law with speed and with discipline," he added.

The legislation is the first part of Biden's two-part economic agenda. The bipartisan infrastructure package focuses on "hard" infrastructure like roads and bridges, and Democrats will now turn to the larger package that focuses on what the President calls "human" infrastructure, which includes investments for family care, to address the climate crisis and expand access to health care. That second piece of legislation still faces an uncertain fate in Congress amid clashes between progressives and moderates.

Congress returned to Washington Monday after a weeklong recess to a bevy of critical issues before the holidays, including passing Biden's broader economic and climate agenda, funding the government before a December 3 deadline, and raising the debt limit.

The bipartisan infrastructure bill, first passed by the Senate in a 69 to 30 vote in August, was passed by the House, including 13 Republican lawmakers, on November 5.

A group of former House Republican lawmakers issued a statement Monday in support of the infrastructure legislation and took aim at House GOP leaders for their silence as members from their own conference have come under attack -- and faced death threats -- for supporting it.

"By remaining silent and failing to publicly defend these 13 members, House GOP leaders are demonstrating their fear of extreme elements within their own conference at the expense of some of their most politically vulnerable members who are essential to winning a House majority," the former lawmakers wrote.

The signing ceremony marked a rare bipartisan gathering, with state and local officials attending from both sides of the aisle.

Besides Portman, Republican Sens. Lisa Murkowski, Susan Collins and Bill Cassidy were also scheduled to be in attendance. Moderate Democratic Sen. Joe Manchin, a key holdout on the ongoing negotiations on Biden's Build Back Better agenda, was there, as were GOP Reps. Don Young of Alaska and Tom Reed of New York.

Key business representatives also took part in the celebration, including the leaders of United Airlines, Ford, the US Chamber of Commerce, and other groups. And unions, including leaders of IBEW, Teamsters, and United Auto Workers, were present.

Oklahoma City Mayor David Holt, a Republican, told CNN the bill will provide funding for his city's roads and bridges.

"This is a celebratory day for mayors. We have fought for the better part of a decade to get this major investment in our nation's infrastructure. So I'm very pleased that Congress and the White House were able to work together to finally get this done. This means a lot for roads and bridges, water infrastructure, broadband, passenger rail, transit, all the things that are core infrastructure and that cities like mine really need help with," Holt told CNN's "New Day."

Former New Orleans Mayor Mitch Landrieu, who has been named a senior adviser and will oversee coordination of the bill's implementation on behalf of the White House, was also set to be on hand.

Landrieu, the White House said, "will oversee the most significant and comprehensive investments in American infrastructure in generations -- work that independent experts verify will create millions of high-paying, union jobs while boosting our economic competitiveness in the world, strengthening our supply chains, and acting against inflation for the long term."

Top administration officials, as well as the President, have said it will take some time for Americans to see and feel the results of the bill's investments.

"They'll see the effects of the bill -- this bill -- probably starting within the next two to three months," Biden told reporters following the bill's passage, adding that it is "going to have a profound impact over time."