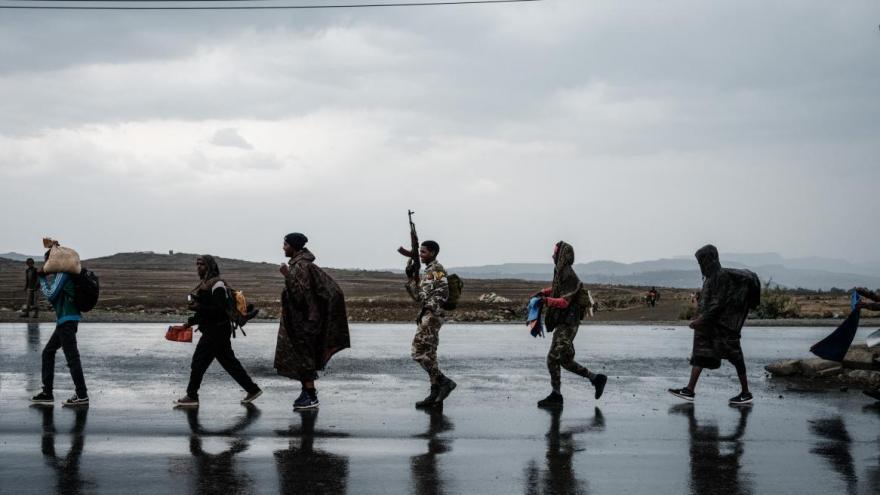 (CNN) -- President Joe Biden signed a new executive order Friday authorizing broad sanctions against those involved in perpetrating the ongoing conflict in Ethiopia as reports of atrocities continue to emerge from the Tigray region.

The administration did not immediately impose sanctions under the new order, but "is prepared to take aggressive action" unless the parties -- including the Ethiopian government, the Eritrean government, the Tigray People's Liberation Front, and the Amhara Regional Government -- "take meaningful steps to enter into talks for a negotiated ceasefire and allow for unhindered humanitarian access," a senior administration official told reporters.

Secretary of State Antony Blinken said Friday that "absent clear and concrete progress toward a negotiated ceasefire and an end to abuses -- as well as unhindered humanitarian access to those Ethiopians who are suffering -- the United States will designate imminently specific leaders, organizations, and entities under this new sanctions regime."

'A different path is possible'

In a statement Friday, Biden said that "the ongoing conflict in northern Ethiopia is a tragedy causing immense human suffering and threatens the unity of the Ethiopian state."

"The United States is determined to push for a peaceful resolution of this conflict, and we will provide full support to those leading mediation efforts," he said.

"I join leaders from across Africa and around the world in urging the parties to the conflict to halt their military campaigns respect human rights, allow unhindered humanitarian access, and come to the negotiating table without preconditions. Eritrean forces must withdraw from Ethiopia," Biden said.

Blinken noted that "if the parties take immediate steps" towards those ends, "the United States is prepared to delay imposition of sanctions and focus on supporting a negotiated process."

Although an administration official voiced optimism "about the growing moves" by regional leaders and the African Union to support a mediated solution, the administration is "not optimistic about the situation on the ground and that's why the President authorized this executive order in order to ramp up the pressure."

A Senate aide told CNN the US Embassies in Ethiopia and Eritrea have already identified names of some potential sanctions targets. Officials stressed that any sanctions would have exemptions for humanitarian and development assistance.

"A different path is possible but leaders must make the choice to pursue it," the US President said.

Ethiopian Prime Minister Abiy Ahmed on Friday vowed that the country "will not succumb to consequences of pressure engineered by disgruntled individuals for whom consolidating power is more important than the well-being of millions."

In a lengthy open letter to Biden, Abiy argued that his government's actions in the Tigray region "have been continuously misrepresented" and blamed the Tigray People's Liberation Front for the crisis.

"As a long-time friend, strategic ally and partner in security, the United States' recent policy against my country comes not only as a surprise to our proud nation, but evidently surpasses humanitarian concerns," Abiy wrote.

The executive order reflects a growing sense of urgency at the situation in Tigray, where humanitarian access to deliver critically needed food, fuel and medicine has been largely cut off.

"Hundreds of thousands of people are facing starvation, in large part because of the government of Ethiopia's efforts to delay and prevent humanitarian aid from reaching civilian populations who need this emergency food and medical assistance to survive," US Agency for International Development (USAID) Administrator Samantha Power said Friday.

"We cannot ignore the fact that heinous human rights abuses are being perpetrated against civilians," she said.

CNN has uncovered evidence that mass detention, sexual violence, and killings that bear the hallmarks of genocide have occurred in Tigray.

Those investigations have spurred Congress to ratchet up pressure on the administration to take action, according to one Senate aide.

In the statement Friday, Biden said he is "appalled by the reports of mass murder, rape, and other sexual violence to terrorize civilian populations."

The administration officials acknowledged that the situation in Tigray has deteriorated in recent months and voiced concern that violence could soon escalate as the rainy season comes to an end, allowing for greater movement in the region.

The situation is likely to be a "key discussion" at next week's United Nations General Assembly in New York, the second official said, "because it is right now one of the largest humanitarian catastrophes in the world."

"There's a widespread consensus, outside of Ethiopia, at least, that there is no military solution to this conflict," they said.

Lawmakers on both sides of the aisle welcomed the new executive order.

"Continuing human rights abuses by the parties to the conflict in Ethiopia warrant an unequivocal response: We will not tolerate war crimes, crimes against humanity, and ethnic violence," said Democratic Sens. Robert Menendez - the chairman of the Senate Foreign Relations Committee - and Chris Coons - who was dispatched by the Biden administration toward the beginning of the crisis to meet with Abiy.

The two senators said they "will unveil a new legislative effort in the coming weeks for Congress to drastically bolster US efforts to pursue accountability for the carnage in the Tigray region as this protracted ethnic conflict approaches the one year mark."

The top Republicans Senate Foreign Relations Committee and House Foreign Affairs Committee, Sen. Jim Risch and Rep. Michael McCaul also welcomed the news, with the latter saying that "there must be accountability for these egregious acts and I support the Biden administration's new Executive Order."

"I also urge the Biden Administration to finalize the determination on whether war crimes, crimes against humanity, and acts of genocide have been carried out during this conflict, a determination which was supposedly imminent when Administration officials testified in front of our committee in June," McCaul added. "This determination must be completed and made public without delay."

Acting Assistant Secretary of State Robert Godec told lawmakers in late June that "the administration is in full agreement that horrifying atrocities have been committed in Tigray and Secretary Blinken did say in earlier testimony, as you've said, that there were acts of ethnic cleansing."

"We are in the process of a fact and law-based review to determine whether the terms crimes against humanity, genocide, and war crimes can and should be used," he said. "The final decision on whether we're going to use those terms is up to the Secretary of State."