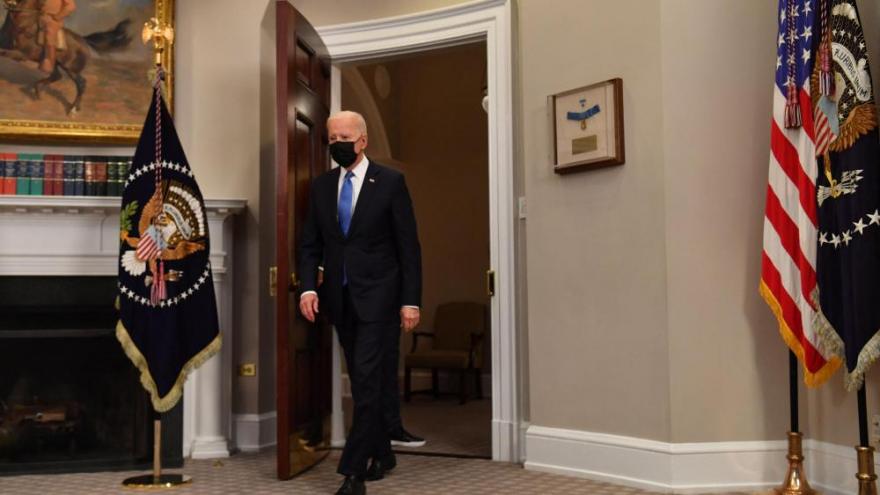 President Joe Biden is scheduled to sign a bill into law on May 20 that's aimed at countering a rise in anti-Asian hate crimes that's come during the coronavirus pandemic.

(CNN) -- President Joe Biden signed into law on Thursday a bill that is aimed at countering a rise in anti-Asian hate crimes during the coronavirus pandemic, saying the legislation is part of the nation's first step toward unity.

"I believe, with every fiber of my being, that there are simple, core values and beliefs that should bring us together as Americans. One of them is standing together against hate, against racism -- an ugly poison that has long haunted and plagued our nation," Biden told a group of advocates, agency officials and a bipartisan group of lawmakers inside the East Room of the White House. "Today I can say that because of all of you ... you've taken that first step."

Vice President Kamala Harris, the first South Asian to serve in her role, said acts of hate are "nothing new" and part of her "lived experience," telling the audience in the East Room ahead of the signing that the new law brings "us one step closer to stopping hate, not only for Asian Americans, but for all Americans."

But she added that "our work will not be done" following the bill signing, saying, "Here's the truth: racism exists in America, xenophobia exists in America, anti-Semitism, Islamophobia, homophobia, transphobia-- it all exists. And so, the work to address injustice wherever it exists, remains the work ahead."

The legislation, called the Covid-19 Hate Crimes Act, will create a new position at the Justice Department to expedite review of potential Covid-19-related hate crimes and incidents reported at the federal, state or local level.

It will also direct the Justice Department and Health and Human Services to work with community-based organizations to issue guidance raising awareness of hate crimes during the pandemic, and would require the attorney general to issue guidance to work with state and local law enforcement agencies to establish online reporting of them.

Attorney General Merrick Garland said in a statement that the signing marks an "important step toward protecting everyone in our country from acts of hate and intolerance."

"This new law will help speed our response to hate crimes and provide resources to law enforcement to improve hate crime reporting," Garland said. "The law will assist law enforcement in targeting its efforts, which will help to prevent these devastating crimes and to respond efficiently and effectively to crimes, when they occur."

The legislation passed in the Senate with an overwhelming 94-1 vote in April. And earlier this month, the House voted 364-62, with all the no votes being Republicans. The bill was introduced by New York Democratic Rep. Grace Meng and Hawaii Democratic Sen. Mazie Hirono.

During his remarks on Thursday, Biden thanked Democrats and Republicans, including Senate Minority Leader Mitch McConnell, for the passage of the bill. He also thanked the families of Heather Heyer and Khalid Jabara for their contributions to the legislation.

The President recalled his visit to Atlanta in the wake of a series of deadly shootings at spas in the area. Eight people were killed in those shootings, six of whom were Asian women.

"We heard about the pain, their fear, anger, and all that existed in the community, feelings. They felt invisible -- not seen," Biden said, later adding that "the conversation we had in Atlanta is one we're hearing all across the country, that all of this hate hides in plain sight."

"We heard out too many Asian Americans have been waking up each morning this past year, genuinely -- genuinely -- fearing for their safety," Biden remarked, saying Asians in the US have been "living in fear for their lives" and are being "attacked, blamed, scapegoated, harassed during this pandemic."

"Grandparents afraid to leave their homes even to get vaccinated, for fear of being attacked. Small business owners targeted and gunned down. Students worried about two things: Covid-19 and being bullied," he continued.

Reported hate crimes against Asians in 16 of the nation's largest cities and counties are up 164% since this time last year, according to a recent study from the Center for the Study of Hate and Extremism at Cal State University San Bernardino.

Separately, Stop AAPI Hate, which tracks reports of racism and discrimination against Asian Americans, says it has received more than 6,000 firsthand complaints since last year. The group began tracking violence and harassment on March 19 last year as more Asian Americans were verbally and physically assaulted while erroneously being blamed for the Covid-19 pandemic.

Biden called for Americans to "speak up" about hate crimes, adding that "silence is complicity."

He also underscored that the US is "unique among all nations in that we are uniquely a product of a document" and not of a religion or ethnicity.

"Every time we let hate flourish we make a lie of who we are as a nation. I mean it literally. We cannot let the very foundation of this country continue to be eaten away like it has been in other moments in our history and happening again," Biden asserted.

Early in his tenure as president, Biden signed an order which established that it is the policy of his administration to condemn and denounce anti-Asian bias, specifically addressing anti-Asian bias in the wake of the coronavirus pandemic.

The order came in stark contrast to terminology frequently used by former President Donald Trump, GOP officials and Trump administration officials to refer to Covid-19 during Trump's time in office. The World Health Organization and the US Centers for Disease Control and Prevention provided the official terminology for the virus in February 2020 and the global health organization also advised not to use geographic locations in naming diseases because it creates a stigma.