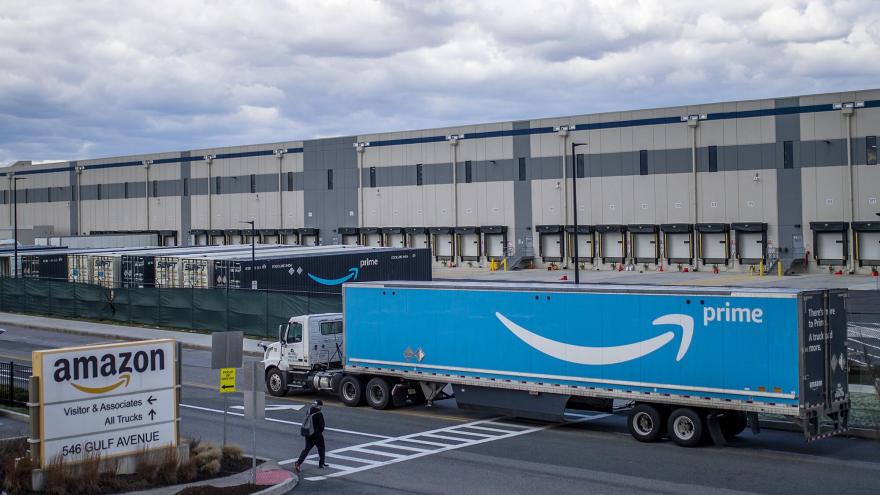 (CNN) -- President Joe Biden on Wednesday signaled his support for Amazon warehouse workers' efforts to organize after employees at a New York City facility made history by successfully voting to form a union for the first time.

Last Friday, the results of a union election showed that employees at the Staten Island facility voted overwhelmingly in favor of unionizing with Amazon Labor Union (ALU), a grassroots labor organization started by current and former Amazon employees of the facility. The move marks the first time a group of US workers has successfully voted to form a union in Amazon's 27-year history.

Speaking to thousands of labor leaders in Washington on Wednesday, Biden asserted that "unions are about, in my view, dignity and respect for people who bust their neck," noting that his White House's task force for "Worker Organization and Empowerment" was established "to make sure the choice to join a union belongs to workers alone."

"And by the way, by the way, Amazon, here we come!" he added, stirring applause from the audience at the North America's Building Trades Unions Legislative Conference. "Watch! Watch!"

The White House had previously indicated that the President supported Amazon workers' efforts. After the election result was announced, White House press secretary Jen Psaki said last week that "the President was glad to see workers ensure that their voices were heard with respect to important workplace decisions."

"He believes firmly that every worker in every state must have a free and fair choice to join a union and the right to bargain collectively with their employer. The Amazon workers in Staten Island made their choice to organize a grassroots union and bargain for better jobs and a better life," she added.

Biden took office establishing a pro-union agenda, hiring a former union leader -- Marty Walsh -- to lead the Department of Labor and repeatedly pushing for Congress to pass the PRO Act, which proponents say will make it easier for workers to form unions, conduct strikes and bargain for better wages and working conditions.

At the conference with labor leaders on Wednesday, Biden credited union workers for the success of his 2020 campaign, telling the group: "You're probably the biggest reason I'm standing here today."

The President previously signaled his support for other unionization attempts by Amazon employees.

As Amazon -- the nation's second largest employer -- continued to expand amid the Covid-19 pandemic last year, workers at an Amazon warehouse in Bessemer, Alabama, attempted to unionize.

The President released a video at the time expressing support for organizing efforts by "workers in Alabama" and others across the country.

"This is vitally important, a vitally important choice, as America grapples with the deadly pandemic, the economic crisis, and the reckoning on race -- what it reveals the deep disparities that still exist in our country," Biden said in the video. "And there should be no intimidation, no coercion, no threats, no anti-union propaganda."

The Alabama warehouse's efforts last year to vote to unionize failed. And last month, in a do-over vote, results of a union vote were too close to call.

The win at the Staten Island facility was surprising, in part, because of the success of the ALU's scrappy campaign, which was driven largely through donations raised on the crowdfunding website GoFundMe. ALU was unaligned with an established labor union, while the Bessemer drive was supported by an 85-year-old labor union -- the Retail, Wholesale and Department Store Union.

Experts suggest the ALU's bootstrap campaign tactics may inspire other workers to organize. And the ALU is slated to kick off another election at a sorting facility in Staten Island later this month.