Biden gives a defiant defense of the withdrawal from Afghanistan: 'I was not extending a forever exit' 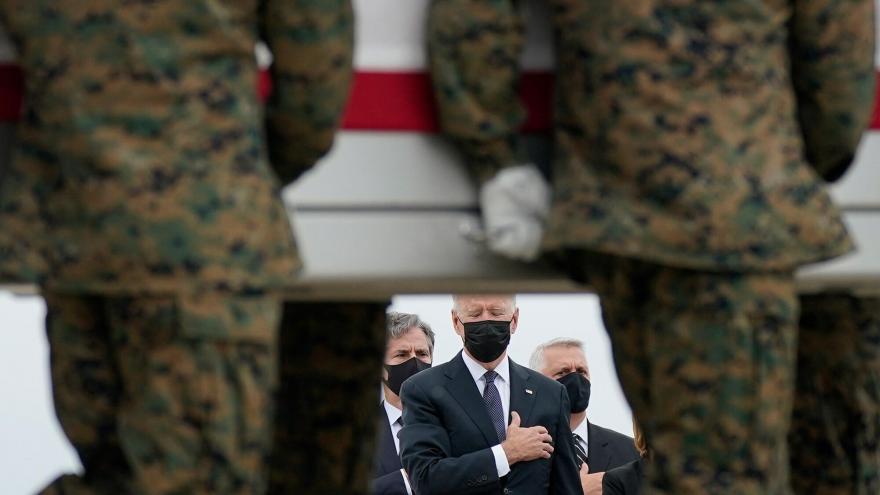 Joe Biden speaks about the US withdrawal from Afghanistan at the White House on August 31, 2021.

(CNN) -- President Joe Biden spoke to the nation Tuesday on the end of the war in Afghanistan, defending the chaotic withdrawal from Kabul a day after the last American military planes left the country, concluding the US' longest war nearly 20 years after it began.

"My fellow Americans, the war in Afghanistan is now over," Biden said at the White House. "I'm the fourth president who has faced the issue of whether and when to end this war. When I was running for president, I made a commitment to the American people that I would end this war. Today I've honored that commitment."

Biden, in defending a decision that has drawn scrutiny for its execution, said the real choice in Afghanistan was "between leaving and escalating," framing his call to withdraw troops as the only option aside from surging more forces to the country.

"I was not going to extend this forever war, and I was not extending a forever exit," he said.

Biden argued that the US "no longer had a clear purpose in an open-ended mission in Afghanistan" and that the US' withdrawal signaled "ending an era of major military operations to remake other countries."

The US withdrawal was rocked by the Taliban's unexpectedly swift takeover of Afghanistan's capital.

Snapshots of people trying to flee the Taliban by congregating outside the gates of Kabul's airport, along with images from inside American military planes filled with evacuees, were broadcast around the world. More than 150 Americans struggling to get to the airport were airlifted by helicopter off the roof of a nearby hotel. Thirteen US service members were killed in a terrorist attack last week outside the airport's gates and more than 170 other people died in the suicide blast. And on Sunday, American forces carried out a deadly defensive strike targeting a suspected ISIS-K suicide bomber who posed an "imminent" threat to the airport.

Still, in his speech to mark the end of the war, Biden painted the withdrawal as an "extraordinary success." The President contended that the US military was prepared to deal with all those events, even though he himself has admitted that the US was caught off-guard by the quick collapse of the Afghan army.

"This is the way the mission was designed. It was designed to operate under severe stress and attack, and that's what it did," Biden said.

Biden paid tribute to the service members who were deployed to handle the withdrawal, including the 13 who died in the terrorist strike and praised their comrades who finished the mission.

"For weeks they risked their lives to get American citizens, Afghans who helped us, citizens of our allies and partners and others on board planes and out of the country. And they did it facing the crush of enormous crowds seeking to leave the country," Biden said.

The President, who faces a political reckoning for the US' handling of the withdrawal, said in a statement Monday that "it was the unanimous recommendation of the Joint Chiefs and of all of our commanders on the ground to end our airlift mission as planned." He's also argued that he thought chaos in the country was inevitable when US troops departed.

Biden asserted during his speech on Tuesday that even if evacuations had started sooner, "there still would have been a rush to the airport, a breakdown in confidence and control in the government."

"And it still would have been a very difficult and dangerous mission. The bottom line is there is no evacuation from the end of a war that you can run without the kind of complexities, challenges, threats we face. None," he added.

The President said he takes responsibility for the decision to withdraw at the end of August, but he also blamed his predecessor, former President Donald Trump, for signing on to an earlier agreement with the Taliban for a US withdrawal on May 1.

"My predecessor, the former President, signed an agreement with the Taliban to remove US troops May 1, just months after I was inaugurated. It included no requirement that the Taliban work out a cooperative government arrangement with the Afghan government," Biden said.

"But it did authorize the release of 5,000 prisoners last year, including some of the Taliban's top war commanders, among those that just took control of Afghanistan. By the time I came into office, the Taliban was in its strongest military position since 2001."

Tuesday's remarks were the first time Biden had spoken in front of the press since Monday's full withdrawal. The White House initially left it to Secretary of State Antony Blinken and US Central Command Commander Gen. Kenneth "Frank" McKenzie to speak in the hours after the final military plane left the country.

On Monday, McKenzie acknowledged that the US military "did not get everybody out that we wanted to get out."

"But I think if we'd stayed another 10 days, we wouldn't have gotten everybody out that we wanted to get out and there still would've been people who would've been disappointed with that. It's a tough situation," he added.

As of Monday, more than 122,000 people had been airlifted from Hamid Karzai International Airport in Kabul since July, Pentagon spokesman John Kirby told reporters, including 5,400 Americans.

And in the 24 hours leading up to Monday morning, 26 military C-17 aircraft lifted off from Kabul carrying 1,200 evacuees, according to Gen. Hank Taylor, the deputy director of the Joint Staff for Regional Operations. In total, 28 flights departed from Kabul airport in that 24-hour window, Taylor said.

A senior State Department official said the department believes there are fewer than 250 American citizens currently in Afghanistan -- and Blinken said Monday that number may be closer to 100 -- who may wish to leave, as US officials stressed a Taliban commitment to let Afghans leave the country after the US and allies left. The State Department official put the number of American citizens who have left the country through evacuation flights or other means closer to 6,000.

"We're trying to determine exactly how many. We're going through manifests and calling and texting through our lists," Blinken said in remarks at the State Department.

The State Department no longer has any diplomats in Afghanistan and has moved its diplomatic mission in the country to Doha, Qatar, Blnken said. He added that the diminished US presence in Afghanistan is not necessarily the end of US commitment there.

The top US diplomat noted that there are residents of Afghanistan who have US passports who are trying to determine if they should leave.

"Our commitment to them, and to all Americans in Afghanistan, and everywhere in the world, continues," Blinken said.

Biden said he intends to hold the Taliban accountable to their commitment that those seeking to leave the country will be able to do so safely.

And during Tuesday's remarks, he reiterated his administration's commitment to continue to go after terrorism around the globe, saying the US will "go after terror where it is today, not where it was two decades ago."

"To ISIS-K: We are not done with you yet," Biden said, vowing a "tough, unforgiving, targeted, precise strategy" for last Thursday's airport attack. ISIS-K has claimed responsibility for the attack.

The US carried out a defensive airstrike on Sunday targeting a suspected car bomb headed to the airport. The strike killed nine members of one family, including six children, according to a relative of those killed who spoke to a local journalist working with CNN.

Biden said the terror threat has metastasized and that "the threat from terrorism continues, but it's changed. Our strategy needs to change too."

The President also acknowledged the new challenges include those presented by China and Russia, saying there's nothing the two nations "would rather have and want more in this competition than for the United States to be bogged down another decade in Afghanistan."