Biden promises to help winter storm-battered Texas recover: 'We're in it for the long haul' 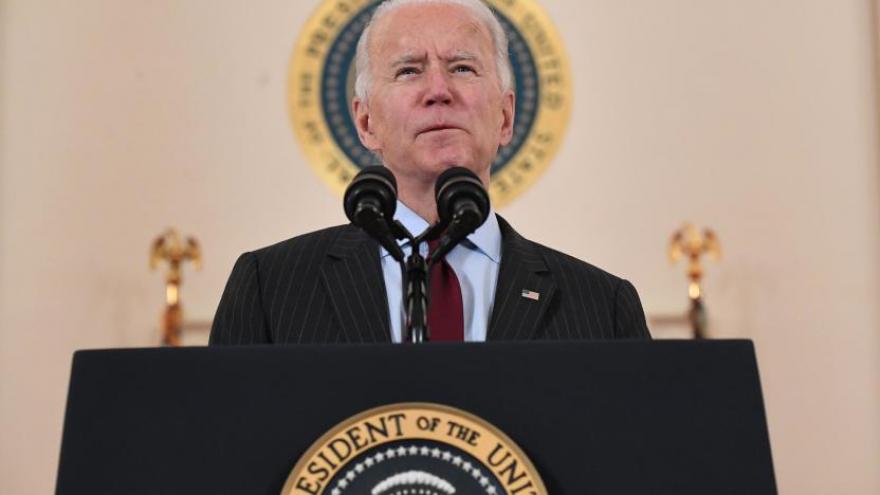 President Joe Biden, seen here speaking out about lives lost to Covid on February 22, will visit Texas to offer both comfort and federal support to the severe winter storm-battered state.

(CNN) -- President Joe Biden embraced a familiar role on his trip to Houston Friday, offering both comfort and federal support after a severe winter storm-battered Texas and left millions without power, heat or water.

It's a role past presidents have stepped into amid disasters and tragedies but also one that comes quite naturally to Biden, whose connections with loss and crisis are among his calling cards.

In his first official trip in the wake of a disaster, the President visited the Harris County Emergency Operations Center and later toured and met with volunteers at the Houston Food Bank, where first lady Jill Biden packaged food and water for the community earlier in the day. Texas Gov. Greg Abbott, a Republican, joined the President in Houston, as did GOP Sen. John Cornyn.

Speaking at a federal vaccination site at NRG Stadium, where the Houston Texans play, Biden sought to reassure Texans that his administration would be there for them as they recover.

"Jill and I wanted to visit Texas today for a couple reasons," the President said. "First and foremost, to let the people of Texas know our prayers are with you in the aftermath of this winter storm. And secondly, to let you know ... that we will be true partners to help you recover and rebuild from the storm and this pandemic and the economic crisis. We're in it for the long haul."

The President and first lady walked around the vaccination site, before addressing a group of armed military personnel, whom Biden thanked for their work setting up the site and distributing vaccines.

The Texas visit was as much about assessing how the federal government can offer assistance in the wake of the storm as it is offering emotional support for a state reeling from the disaster.

"It's a lot about showing up, and that matters a lot to people," Kenny Thompson, a former Biden vice presidential adviser, said. "He takes his time with every single person he talks to. There's really no reason to have a schedule for these kinds of days because he's going to spend as much time with people as they allow him to because that's who Joe Biden is."

Along with zeroing in on storm recovery efforts, the President used the trip to promote vaccinations, saying they are weeks ahead of schedule as the administration ramps up the federal involvement with vaccines in its efforts to get the oronavirus under control.

After spending parts of the day with the state's governor and senior Republican senator, the President said quickening the pace of vaccine distribution and administration is an area of bipartisan agreement.

"There's nothing partisan about this virus. It's too long we've allowed the virus to divide us. I met today with Gov. Abbott, Sen. Cornyn -- conservative Republicans, I'm a Democratic president," Biden said. "We disagree on plenty of things -- there's nothing wrong with that. But there are plenty of things we can work on together, and one of them is represented right here today: the effort to speed up vaccinations."

The Federal Emergency Management Agency-operated mass vaccination center at NRG Stadium is one of several federally run sites across the country administering vaccines. The Houston site opened this week and aims to provide 6,000 vaccinations a day.

As he received his first in-person assessment of the recovery efforts from the storm, Biden heard updates from local officials about the state and federal coordination in response to the historic weather event.

Last week, Biden approved a major disaster declaration for the state, which unlocked more federal resources to help Texas amid the storm. The President also spoke with Abbott twice -- first on a call with a bipartisan group of governors from states affected by the storms and again in a private conversation later in the week.

"It's a hell of an operations center, probably the best one in the country. Thank you for what you're doing," Biden told staff at the Harris County Emergency Operations Center, with Abbott at his side. Biden said he was eager to provide federal assistance to Texas before Abbott even asked in their phone call.

"He did, he said yes before I even asked the question," Abbott said.

As Texas residents faced power and water outages during the storm, Abbott was among those Texas Republicans laying misleading blame on renewable energy sources. He also said the Democratic-proposed Green New Deal would bring more failures of power if it became law.

One local politician not in attendance for the President's trip -- Sen. Ted Cruz, who spoke earlier in the day at the Conservative Political Action Conference in Orlando. White House press secretary Jen Psaki said there was "neither an invitation nor a request for him to attend."

The President also spoke to local issues, praising NASA for the recent rover landing on Mars and MD Anderson Cancer, where his late son, Beau, was treated in 2013.

"If there's just one thing, one thing I could be known for as president, I would be that: the president who had, during his era, brought an end to cancer as we know it," Biden said, to applause.

While in office, the President has prioritized the moments where he can offer consolation to the country.

In a somber White House ceremony earlier in the week, Biden memorialized the 500,000 lives lost to Covid-19, sharing his own experience with loss after the tragic deaths of his wife and baby daughter just before he was sworn-into the Senate, and decades later, of his son Beau.

Biden later added: "We ask you to join us to remember. So we can heal. To find purpose, and the work ahead to show that there is light in the darkness."

He's also lent this type of support behind the scenes. When a tornado hit Alabama last month, Biden called the state's Republican Gov. Kay Ivey to check on the impact. Last weekend, he spent an hour visiting privately with his friend and former Republican Sen. Bob Dole after he was diagnosed with stage four lung cancer.

Biden last traveled to Texas in June to extend condolences to the family of George Floyd, whose death in police custody sparked nationwide demonstrations on policy brutality and racial injustice, ahead of his Houston funeral.

"He listened, heard their pain and shared in their woe," the family's attorney Benjamin Crump said at the time. "That compassion meant the world to this grieving family."

And in countless moments on the campaign trail before the pandemic struck the country, Biden would linger long after his events to speak with voters approaching him with their own stories of loss and personal struggles.

Part of the job

Biden's trip Friday followed in the footsteps of his predecessors who traveled to sites of destruction to assess the aftermath and offer support. Former President Donald Trump visited several disaster zones while in office, including touring storm damage along the Gulf Coast after Hurricane Laura last year. On a trip to Puerto Rico in the wake of Hurricane Maria in 2017, Trump casually tossed paper towels at a crowd of residents -- a move that gave fodder to his critics who characterized him as unempathetic.

As vice president, Biden often stepped into this role as well, touring the aftermath of hurricanes, tornadoes and wildfires as well as visiting with families facing tragedy.

"As many details as we can give him as possible is what he asks for ranging from dollar amounts, to deaths, to how many schools are closed down, you name it," Thompson, who traveled to disaster zones and tragedy sites with Biden and former President Barack Obama, said. "Anything that's going to affect the community he's going into that's what he wants to know about."

At times, he would also make it a point to visit communities after they've recovered to shine light on their resilience. In 2014, Biden spoke at a dedication ceremony for Joplin High School as it re-opened after a tornado destroyed the Missouri school and several others three years earlier.

"You are the example of who we are as a people," Biden said at the time. "We never bend; we never break; we never stop; and we always rebuild, and that's why I'm here. It's remarkable."