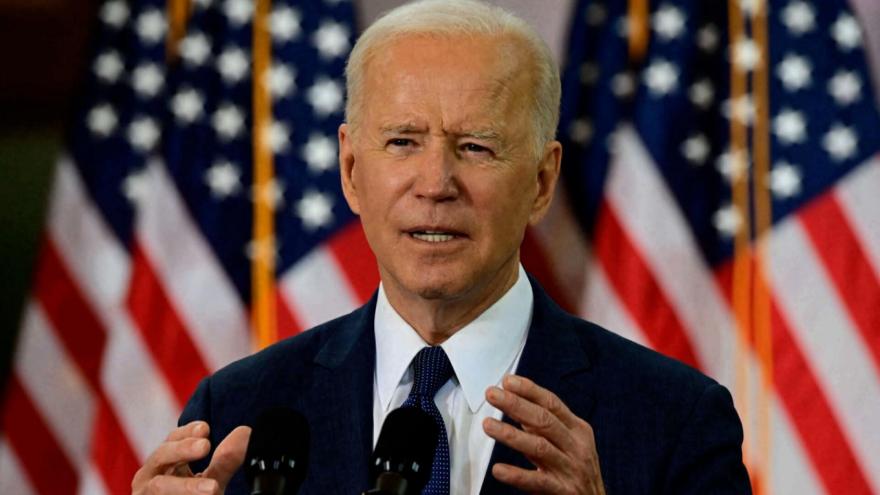 (CNN) -- President Joe Biden will seek $80 billion to fund enhanced Internal Revenue Service enforcement of high-earners to help pay for his American Families Plan, which he is set to unveil later this week, two sources briefed on the proposal told CNN.

The administration believes the enhanced measures to crack down on tax evasion will increase revenue for the government by $700 billion, although some outside experts are skeptical and the Congressional Budget Office -- the accepted scorekeeper -- is unlikely to project that much revenue.

As CNN has reported, this is a component of how Biden plans to finance his proposal, with the tax increases on the individual side for the wealthy making up a more significant and tangible chunk.

Previous administrations have touted beefing up IRS enforcement to raise money, and while there are definitely large sums that can be pulled in, it remains to be seen whether it will be as much as Biden's team thinks.

The topline spending proposal for the enhanced IRS enforcement component of the plan was first reported by The New York Times.

Biden is poised to unveil a roughly $1.5 trillion legislative proposal to invest hundreds of billions of dollars into key Democratic priorities on education, child care and paid leave this week. It will be the second part of a sweeping $4 trillion spending proposal, the first of which was a roughly $2 trillion infrastructure and jobs plan.

Biden is planning to use his remarks to the joint session of Congress on Wednesday night to highlight the proposal's key components.

The details of the plan are still being worked out and the total cost of the plan has seemingly fluctuated by the day, according to people briefed on its structure. But the American Families Plan is expected to land somewhere between $1.5 and $1.8 trillion, the people say.

In addition to the enhanced IRS enforcement, the financing of the plan includes raising the top marginal rate to 39.6% from 37% -- back to the top rate prior to the 2017 tax cuts -- and raising the capital gains rate for people making more than $1 million to 39.6%, from 20%. The 3.8% Affordable Care Act surtax would still apply, which would push the number north of 43%.

The plan will be the second part of a proposal to help the nation's economy recover from the coronavirus pandemic. Biden unveiled the first part, his infrastructure and jobs proposal, last month.

The American Jobs Plan would heavily invest in rebuilding the nation's crumbling infrastructure and shift to greener energy over the next eight years. The President says he plans to pay for his proposal by raising corporate taxes and eliminating tax breaks for fossil fuels, which was one of his core campaign promises.

Biden would raise the corporate income tax rate to 28%, up from 21%. The rate had been as high as 35% before former President Donald Trump and congressional Republicans cut taxes in 2017. The White House says this corporate tax hike would raise more than $2 trillion over the next 15 years.

The proposal includes building or retrofitting more than 2 million homes or housing units, replacing every lead pipe in the country and ensuring that all Americans have access to affordable, reliable and high-speed broadband. It also calls for investments in manufacturing, transportation, research and development, bolstering caregiving for aging and disabled Americans and building new public schools and upgrading existing buildings.