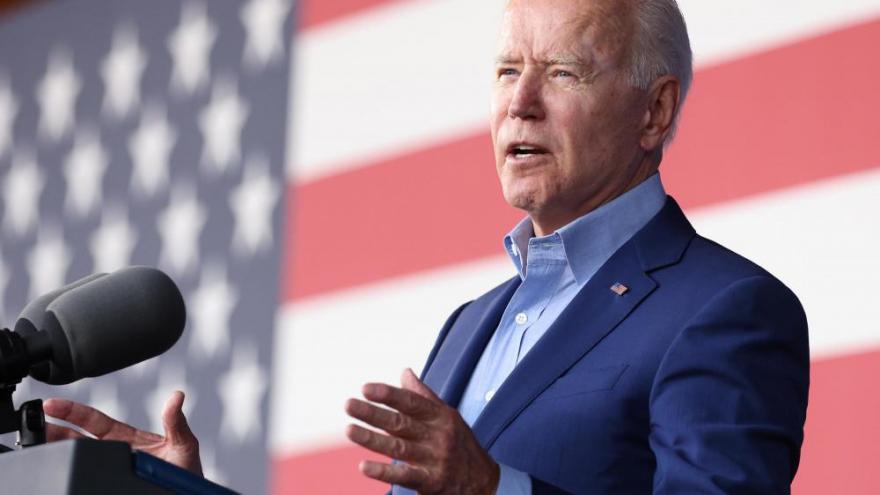 President Joe Biden said Friday the wildfires intensifying in the West demand "urgent action" as he met with seven governors to discuss how states are responding to the wildfires and how the federal government can best assist. Biden is shown during a campaign event for Terry McAuliffe, Democratic gubernatorial candidate for Virginia, in Arlington, Virginia, U.S., on Friday, July 23, 2021.

(CNN) -- President Joe Biden said Friday the wildfires intensifying in the West demand "urgent action" as he met with seven Republican and Democratic governors to discuss how states are responding to the wildfires and how the federal government can best assist.

"We can't ignore how the overlapping and intertwined factors -- extreme heat, prolonged drought and supercharged wildfire conditions -- are affecting the country. And so this is a challenge that demands our urgent, urgent action," Biden said during the virtual meeting.

The President said: "Our resources are already being stretched to keep up. We need more help, particularly when we also factor in additional nationwide challenges, the pandemic-related supply chain disruptions and our ongoing efforts to fight Covid."

"We're in a for a long fight yet this year and the only way we're going to meet those challenges is by working together. Wildfires are a problem for all of us and we have to stay closely coordinated in doing everything we can for our people," Biden said.

The President held a similar meeting with governors last month to discuss the raging wildfires. In that meeting, Biden said climate change was a driving factor of the wildfires, and that the US was seeing wildfires of greater intensity that move with unusually high speed.

"I said then that the threat of Western wildfires this year was as severe as it's ever been, and in the past month we've sadly seen the truth of that being played out. Since our last meeting, the number of large uncontained wildfires has nearly doubled to 66. 66 of those fires. The number of firefighters on the job that battle them has tripled. Over 3.4 million acres have already burned," Biden said.

Biden and Harris discussed with the governors efforts to strengthen wildfire prevention, preparedness and mitigation. They heard from governors directly on how the early and severe wildfire season is impacting residents and land in the states.

So far, Biden said, the Federal Emergency Management Agency has approved 20 fire management assistance grants totaling up to $100 million to help states pay for the cost of fighting these fires.

"We're also working with FEMA and the Defense Logistical Agency to get ahead of this emergency supply chain challenges, and we still have some supply chain challenges related to hoses and a number of other things," he said. "We've tapped additional aircraft from the Department of Defense to aid in the fire detection and firefighting."

Inslee told CNN later Friday that he was impressed with Biden's "resolute effort" to pass major climate initiatives through a $3.5 trillion budget reconciliation bill, and, along with Newsom, urged the President to go beyond the immediate assistance and pass strong climate provisions through the package that Democrats are pressing forward.

"There's no human intervention that can save these forests if we don't stop climate change," Inslee told CNN. "All of us want more aerial assets, more bulldozers, more trained personnel, but it's kind of like if there's an arsonist at loose, and we have to corral the arsonist. We have to go on the offense."

Walz, the only midwestern governor on the call, told Biden his state is suffering extreme drought and poor air quality from fires burning out west.

"Out here in Minnesota, the grey hairs are talking about the last time we've seen drought like this was '88 and it's probably more like 1961," Walz told Biden at the meeting, according to video obtained by CNN. Walz said that has had stark impact on the agriculture-heavy state's production for the year and asked for more flexibility from the federal government to deal with the fallout.

Harris, who is from California, said she cares deeply about the issue and that her family has been under evacuation orders in the last couple of years.

"Our folks should not have to fear that they are going to lose their home, everything they have, much less risk their lives in these moments," Harris said. She echoed Biden's commitment to continue to stay in touch with the governors and that the administration would continue to provide assistance.

This story has been updated with additional details from the meeting.