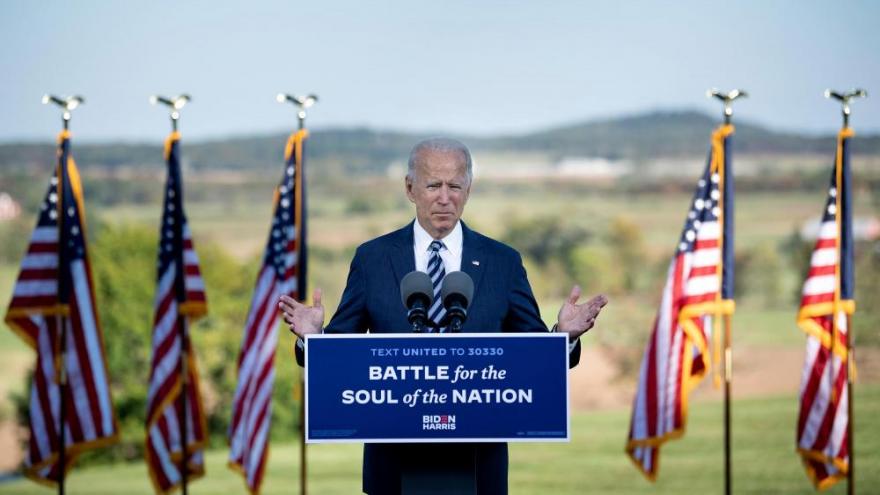 Democratic presidential nominee Joe Biden warned of the "cost of division" in a speech in Gettysburg, Pennsylvania, delivering a call to turn past a moment he said is "neither good nor normal" and unify.

(CNN) -- Democratic presidential nominee Joe Biden warned of the "cost of division" Tuesday in a speech in Gettysburg, Pennsylvania, delivering a call to turn past a moment he said is "neither good nor normal" and unify.

In a speech that recalled Abraham Lincoln's famous address there, Biden pointed to racial division, economic inequality and doubt being cast by President Donald Trump on the effectiveness of masks and social distancing in combating the coronavirus pandemic.

Reciting the opening words of Lincoln's Gettysburg Address, Biden said, "He taught us this: A house divided could not stand. That is a great and timeless truth. Today, once again, we're at a house divided. But that, my friends, can no longer be. We are facing too many crises, we have too much work to do, we have too bright a future to have it shipwrecked on the shores of anger and hate and division."

"The country is in a dangerous place. Our trust in each other is ebbing. Hope seems elusive," he said in remarks that rarely mentioned Trump but frequently alluded to his presidency.

The speech underscored Biden's desire to offer a unifying message in the closing weeks of a presidential race that he leads. Polls have shown that he is leading among older and independent voters, groups that favored Trump in 2016, and that suburbanites and White women have tilted heavily in his direction compared to four years ago. In Gettysburg, his message was that he could end the chaos of Trump's presidency.

It was a stark contrast with Trump, who earlier Tuesday afternoon had tweeted that he was ending negotiations for a stimulus package to boost an economy battered by the pandemic, saying he did not want to spend money to "bailout poorly run, high crime, Democrat States."

Biden's speech came the day a Monmouth University poll showed him leading Trump by 11 percentage points in Pennsylvania, a critical swing state that could tip the winner over 270 electoral votes on November 3.

Pennsylvania has long been a focal point for the campaign of Biden, who was born in Scranton. He kicked off his campaign in April 2019 with a speech in Philadelphia and made several stops in the state during a whistle-stop train tour last week. His campaign has also spent more than $48 million on television advertising there to Trump's $21 million, according to the ad-tracking firm CMAG.

Biden also included Pennsylvania labor leaders in his development of stimulus proposals that would pump hundreds of millions of dollars into the clean energy economy.

Biden, who wore a mask to the podium and then took it off to deliver his outdoor speech to a small, socially distanced crowd, was critical of how Trump -- who revealed last week that he had tested positive for coronavirus, was hospitalized for three days and has since returned to the White House -- is handling the pandemic, saying Tuesday that "we can do so much better."

"It's a virus. It's not a political weapon," Biden said.