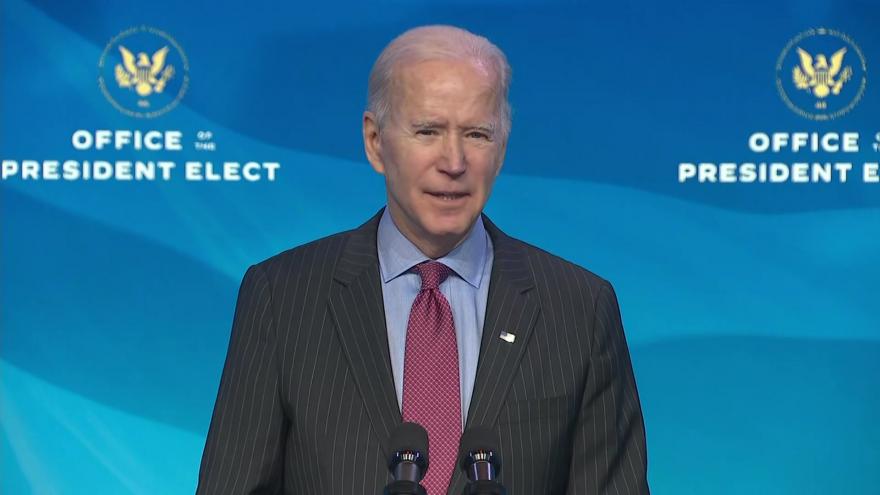 (CNN) -- President-elect Joe Biden said President Donald Trump's decision to skip his inauguration is "one of the few things he and I have ever agreed on."

"It's a good thing, him not showing up," Biden told reporters Friday in Wilmington, Delaware, at a news conference after he introduced Cabinet nominees.

"He exceeded even my worst notions about him. He's been an embarrassment to the country, embarrassed us around the world. He's not worthy to hold that office," Biden said.

However, Biden said he is glad Vice President Mike Pence will attend his inauguration.

"He's welcome. I think it's important that as much as we can stick to what have been the historical precedents of how an administration changes should be maintained. And so Mike, the vice president, is welcome to come. We'd be honored to have him there, and to move forward in the transition," Biden said.

House Democrats are preparing articles of impeachment, expected to be introduced as soon as Monday. The President-elect did not weigh in on whether Congress should impeach Trump and remove him from office over his actions leading up to his supporters' riot at the Capitol this week.

He said he and Vice President-elect Kamala Harris are focused on preparing their agenda to combat the coronavirus pandemic and bolster a battered economy.

Biden said there's no doubt he wants Trump, who he called "one of the most incompetent presidents in the history of the United States of America," out of office as soon as possible. He said if Trump had several months left in office, he would push for his impeachment. Now, though, Biden said, "The quickest way that will happen is us being sworn in on the 20th. What action happens before or after that is a judgment for Congress to make."

"We're going to be doing our job, and the Congress can decide how to proceed with theirs," Biden said.

Biden specifically singled out Senate Majority Leader Mitch McConnell and Utah Sen. Mitt Romney, praising their actions on Wednesday as Congress counted electoral votes, taking the last procedural step of the 2020 election to affirm Biden's victory ahead of his inauguration.

But he said that those who tried to overturn the election results by objecting to some states' electoral votes being counted "should be ashamed of themselves."

Asked if Sens. Ted Cruz of Texas and Josh Hawley of Missouri should resign, Biden said: "I think they should be just flat beaten the next time they run. I think the American public has a real, clear look at who they are. They're part of the big lie."

"The acolytes that follow (Trump), like Cruz and others -- they're as responsible as he is," Biden said. "There are decent people out there who actually believe these lies because they've heard it again and again."