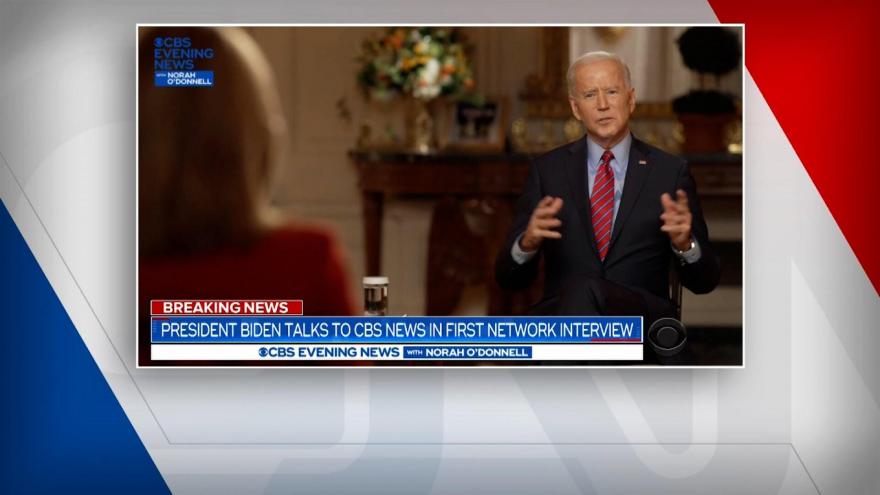 When asked in an interview with "CBS Evening News" anchor Norah O'Donnell if he thought Trump should receive an intelligence briefing if he requested one, Biden said, "I think not."

"I'd rather not speculate out loud," Biden said when asked what he fears could happen if Trump continued to receive the briefings. "I just think that there is no need for him to have the -- the intelligence briefings. What value is giving him an intelligence briefing? What impact does he have at all, other than the fact he might slip and say something?"

The President's remarks did not appear to trigger an immediate change in White House policy.

A senior administration official previously told CNN that Trump has not submitted any requests at this point. There are many ways intelligence can be presented, the official said, something the intelligence community would formulate should any request come in.

Trump was not known to fully or regularly read the President's Daily Brief, the highly classified summary of the nation's secrets, when he was in office. He was instead orally briefed two or three times a week by his intelligence officials, CNN has reported.

Former Trump Principal Deputy Director of National Intelligence Sue Gordon wrote in a Washington Post op-ed following the insurrection at the US Capitol last month that Trump "might be unusually vulnerable to bad actors with ill intent" once he's out of office.

Gordon, an intelligence veteran of more than 30 years, also said in 2019 that one of Trump's most common responses to intelligence briefings was to doubt what he's being told.

In the clip of the interview that aired Friday, Biden declined to say if he'd vote to convict Trump in next week's impeachment trial if he were a senator.

"Look, I ran like hell to defeat him because I thought he was unfit to be president," Biden said. "I've watched what everybody else watched, what happened when that -- that crew invaded the United States Congress. But I'm not in the Senate now. I'll let the Senate make that decision."

In remarks following the January insurrection, Biden told reporters, "I've been saying for now, well, over a year, (Trump's) not fit to serve. He's one of the most incompetent presidents in the history of the United States of America."

The House of Representatives impeached Trump last month on a charge of inciting the insurrection at the Capitol that left five people dead.

In a pretrial brief filed Tuesday, the House impeachment managers accused Trump of being "singularly responsible" for the deadly riots, saying the former President's actions spreading false conspiracy theories that the election was stolen incited his supporters to attack the Capitol and try to disrupt the peaceful transfer of power by stopping Congress from certifying the election.

The House impeachment managers on Thursday requested Trump testify at his upcoming Senate impeachment trial, but his legal team quickly rejected the invitation.

This story has been updated with additional comments from White House press secretary Jen Psaki on Saturday.