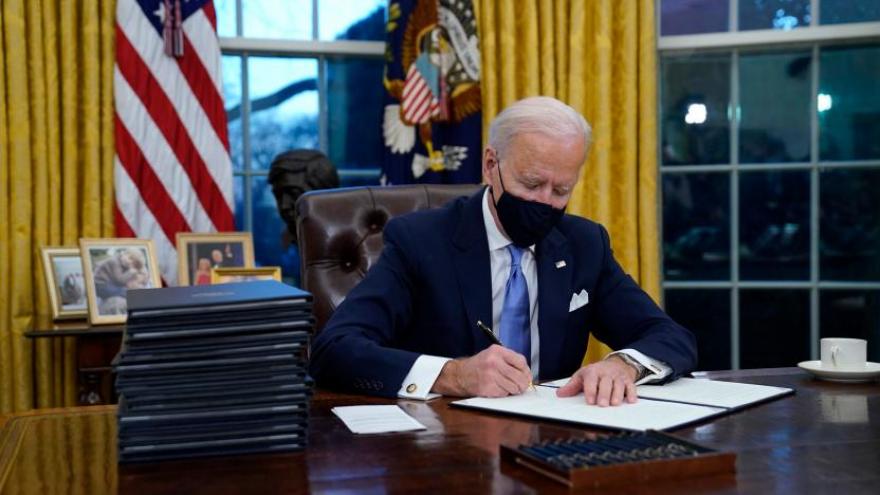 President Joe Biden signs his first executive order in the Oval Office of the White House on January 20, 2021, in Washington.

Biden, speaking from the Resolute Desk in the Oval Office after signing Day One executive orders, said he would not immediately reveal the contents of the letter out of respect for Trump.

"The President wrote a very generous letter," Biden told reporters. "Because it was private, I will not talk about it until I talk to him, but it was generous."

A senior Trump aide described the letter to CNN as a "personal note" that prays for the success of the country and the new administration to care for the country. The aide said writing the letter to Biden was one of the many items on Trump's list in the Oval Office Tuesday night.

It is a modern tradition for outgoing presidents to write their successors a letter and leave it for them on the Resolute Desk in the Oval Office.

Trump did not show the note he left Biden to many of his aides, according to one person.

In a briefing Wednesday night, White House press secretary Jen Psaki declined to offer more details on the letter Trump left for Biden, telling reporters that, based on comments from Biden, "this is a letter that was private, as he said to you all, it was both generous and gracious, and it was just a reflection of him not planning to release the letter unilaterally."

While it may seem surprising Trump upheld this tradition when he ignored every other element of a peaceful handoff, it is in keeping with his past enthusiasm at the letter he received from President Barack Obama.

Trump was so taken with Obama's letter that he tried phoning him as soon as he read it on Inauguration Day in 2017. But Obama was still flying to Palm Springs on the presidential aircraft and couldn't take the call.

When one of Obama's aides reached back out to the White House to return the call, the new President's staffers said Trump just wanted to say thank you for the note -- and wanted Obama to get the message. The men never connected directly.

"It was long. It was complex. It was thoughtful," Trump said of the letter the week after taking office in an interview with ABC News. "And it took time to do it, and I appreciated it."

Later, he showed off the letter to visitors in the Oval Office.

In his farewell address on Wednesday, Trump did not name Biden, but said he wished the "new administration great luck and great success."

This comes after Trump spent months lying about the presidential election being rigged against him and spreading baseless conspiracy theories about voter fraud. He incited a violent mob to storm the US Capitol, which left five people dead including a Capitol Police officer. He was recently impeached by the House of Representatives for his role in inciting that deadly Capitol attack, and there will be a trial in the US Senate.

Former Vice President Mike Pence also left a letter for Vice President Kamala Harris. Pence attended Biden's inauguration, and as he was departing the US Capitol after the ceremony, Pence and former second lady Karen Pence shared a laugh with Harris and her husband, Doug Emhoff.