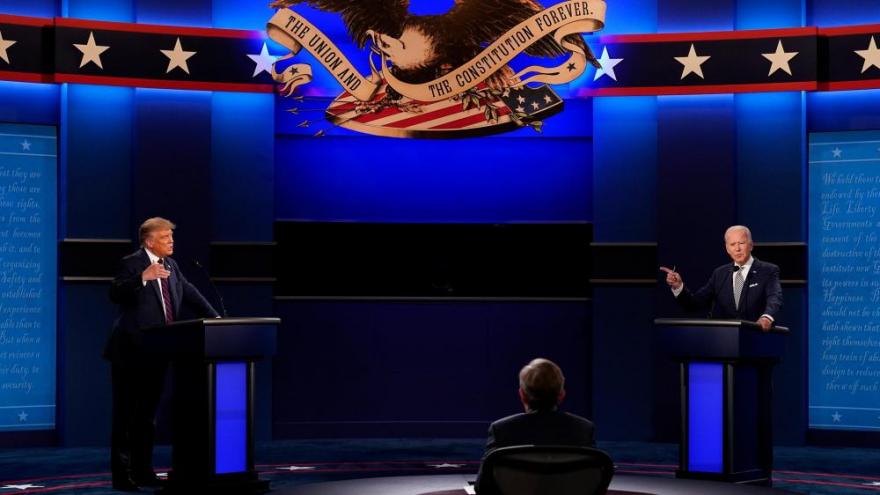 Democratic presidential nominee Joe Biden said that the second presidential debate should not be held if President Donald Trump is still infected with coronavirus, but that he would base his participation in the debate upon recommendations from medical experts.

(CNN) -- Democratic presidential nominee Joe Biden said Tuesday that the second presidential debate should not be held if President Donald Trump is still infected with coronavirus, but that he would base his participation in the debate upon recommendations from medical experts.

"Well, I think if he still has Covid, we shouldn't have a debate," Biden told reporters in Maryland. "I think we're gonna have to follow very strict guidelines. Too many people have been infected and it's a very serious problem."

He continued: "And so I'll be guided by the guidelines of the Cleveland Clinic, and what the docs say is the right thing to do -- if and when he shows up for debate."

The former vice president also said he looks forward to the debate, which is set to take place next Thursday in Miami.

"I'm looking forward to being able to debate him. But I just hope all the protocols are followed, what's necessary at the time," he said.

Trump, who left Walter Reed National Military Medical Center on Monday after receiving treatment for the virus, is among more than a dozen people close to the administration or his reelection campaign who have contracted the virus in recent days.

The President tested positive last Thursday, but it's unclear when he may have contracted the virus as officials -- including his physician Dr. Sean Conley -- have repeatedly refused to disclose when he last tested negative.

On Wednesday, Vice President Mike Pence and Sen. Kamala Harris, Biden's running mate, are set to face off in their only debate of the 2020 cycle. Pence, who has been near a number of people who have contracted the virus, has tested negative for the virus several times in the last few days.

Trump has said that he plans to show up for the forthcoming debates despite his positive coronavirus diagnosis, leading debate organizers to consider a host of contingencies for how to host the two remaining presidential debates safely. One possible option is to hold the debates virtually.

"The Commission, including me, is certainly open to virtual operations of the debates, without question," said a commission member, who asked for anonymity to speak openly about forthcoming deliberations.

Trump's bout with the virus has brought fresh uncertainty into the race with less than a month until Election Day, raising questions about the health of the President as voters cast ballots in some states.

Conley insisted on Monday that Trump was well enough to return home, though he noted that the President "may not be entirely out of the woods yet."

Biden, meanwhile, blamed Trump for contracting the virus, saying on Monday that his refusal to consistently wear masks and social distance were to blame.

"Anybody who contracts the virus by essentially saying, 'masks don't matter, social distancing doesn't matter,' I think is responsible for what happens to them," Biden said of Trump during an NBC town hall in Miami.