Biden suggests the evidence in Chauvin trial is 'overwhelming': 'I'm praying that the verdict is the right verdict' 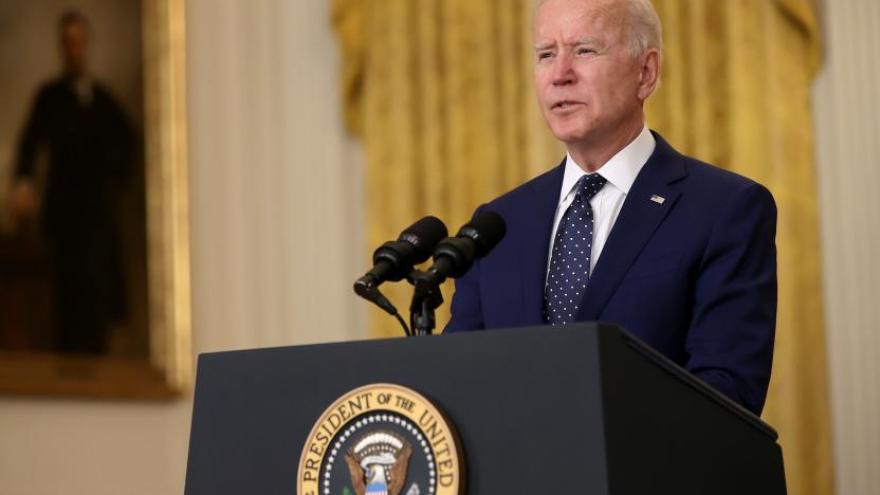 President Joe Biden called George Floyd's brother Philonise Floyd on April 19 as his family and the nation await a verdict in the trial of former Minneapolis police Officer Derek Chauvin.

(CNN) -- President Joe Biden, breaking his careful silence about the eventual outcome in the trial of Derek Chauvin, said Tuesday he was "praying the verdict is the right verdict" and suggested there was ample evidence for the jury to consider as they determine whether the former Minneapolis police officer is guilty of murdering George Floyd.

"It's overwhelming, in my view," Biden said in the Oval Office, where he was meeting with Hispanic lawmakers. "I wouldn't say that unless the jury was sequestered."

Biden has called Floyd's death a tragedy but has avoided until now weighing in on a potential verdict, wary of appearing to influence an ongoing legal proceeding. Past presidents have also usually avoided signaling whether they believe high-profile defendants are guilty.

Biden did not explicitly say Chauvin should be convicted, but his nod to the verdict represents a shift in his rhetoric surrounding the case. A day earlier, the judge in the case cautioned elected officials on voicing their opinions in the trial.

"I wish elected officials would stop talking about this case, especially in a manner that is disrespectful to the rule of law and to the judicial branch and our function," Judge Peter Cahill said. He was referring to comments made by Rep. Maxine Waters, a California Democrat who said "we're looking for a guilty verdict" over the weekend. Waters' comments, including a call for protesters to get "more confrontational" if Chauvin is found not guilty, have roiled the political world and could affect the case.

"I think if they want to give their opinions, they should do so in a respectful and in a manner that is consistent with their oath to the Constitution, to respect a coequal branch of government," Cahill said. He added Waters' remarks could be grounds for appealing a verdict in the trial.

White House press secretary Jen Psaki declined to clarify whether Biden's comments meant he believed Chauvin should be convicted on all counts and what exactly the President was describing as "overwhelming."

"We're not going to get ahead of the outcome," Psaki told reporters in a White House briefing when pressed to clarify.

Biden speaks out after jury sequestered

The press secretary said she expects the President will weigh in further once a verdict is reached. She added that Biden is not looking to influence the outcome of the trial.

Psaki stressed the President has continually called for peace, regardless of the outcome of the trial. She said the White House has been working with state and local authorities to provide the space for peaceful protests.

She continued: "Clearly the impact of trauma and the exhaustion is on communities of color around the country more than it is on others and the President recognizes this is an extremely painful issue."

Biden and his aides are cautiously awaiting the outcome of the trial as a jury begins its second day of deliberations. Members of the jury have been sequestered in a hotel during deliberations and were told to avoid reading or watching coverage of the trial.

On Monday, Biden telephoned Floyd's family members, waiting until the jury was sequestered to make contact.

"I can only imagine the pressure and the anxiety that they're feeling," he said. "They're a good family and they're calling for peace and tranquility no matter what the verdict is."

Speaking earlier Tuesday, Floyd's brother, Philonise, described his conversation with the President in an interview on NBC.

"He was just calling. He knows how it is to lose a family member. And he knows that the process of what we're going through so he was just letting us know that he was praying for us, and hoping that everything would come out to be OK," Philonise Floyd said.

Psaki confirmed the call took place. "President Biden spoke with the family of George Floyd yesterday to check in with them and also share that the family was in his prayers," Psaki tweeted Tuesday morning.

The call from the President came the same day closing arguments were presented in the Chauvin trial. The jury in the trial began its deliberations on Monday and are set to continue Tuesday.

Biden has been closely monitoring the closing arguments, CNN has reported, fearful that a controversial verdict could inflame racial tensions and further escalate a deepening crisis in confidence with the nation's police forces.

The President voiced his concern about potential fallout from the trial during a private meeting last week with members of the Congressional Black Caucus, people familiar with the session previously told CNN.

Biden called the Floyd family last year shortly after Floyd's death, and later the then-presidential candidate traveled to Houston to privately meet with the family and offer his condolences.

Widespread protests against police brutality and racism swept the nation over the summer after a video surfaced showing Floyd handcuffed and on the ground saying, "I can't breathe," as Chauvin kneeled on Floyd's neck.

Chauvin is charged with second-degree unintentional murder, third-degree murder and second-degree manslaughter in the death of Floyd. He has pleaded not guilty to all three charges.

Biden's aides have begun drafting statements for the President to deliver, either in writing or in person, once a verdict is rendered, CNN has reported. Vice President Kamala Harris has also been involved in conversations with national Black leaders.

The White House will seek to strike a balance between acknowledging an expected outpouring of emotion while still calling for calm, officials told CNN. Biden wants neither to replicate the heavily militarized response to protests under former President Donald Trump nor to appear absent in the face of violence or unrest directed at law enforcement, one official said.

The President also believes he must directly acknowledge the systemic racism that pervades criminal justice in America, advisers say.