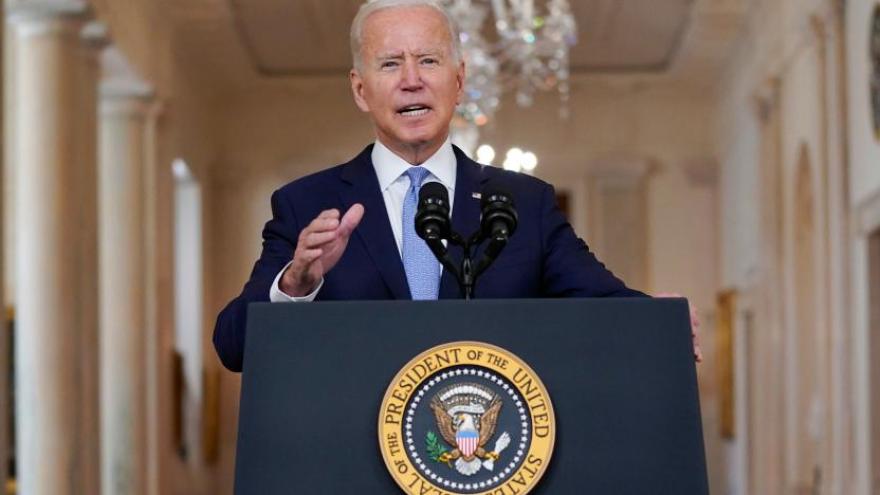 President Joe Biden said Sept. 3 the Texas state law that bans abortion after as early as six weeks into pregnancy is "almost un-American," pointing specifically to a provision allowing individuals to take civil action against people who help a woman get an abortion.

(CNN) -- President Joe Biden said Friday the Texas state law that bans abortion after as early as six weeks into pregnancy is "almost un-American," pointing specifically to a provision allowing individuals to take civil action against people who help a woman get an abortion.

Biden told reporters at the White House he has asked the Justice Department to see if there are ways within existing law to limit the independent action of individuals enforcing a state law.

"The most pernicious thing about the Texas law, it sort of creates a vigilante system," Biden said.

The President added: "It just seems -- I know this sounds ridiculous -- it's almost un-American, what we're talking about."

The Texas law is one of the strictest abortion laws in the nation and it prohibits abortion providers from conducting abortions once a fetal heartbeat is detected, which is around six weeks into the pregnancy and before some women know they are pregnant. It also allows private citizens to bring civil litigation with a threat of $10,000 or more in damages against providers or anyone who helped a woman access an abortion after six weeks.

In a statement on Thursday after the Supreme Court formally denied a request to freeze the law, Biden said it was an "unprecedented assault on a woman's constitutional rights under Roe v. Wade, which has been the law of the land for almost fifty years." The landmark 1973 Supreme Court decision affirmed the legality of a woman's right to have an abortion.

The President said in that statement he was launching a "whole of government" effort to respond to the law and tasking the Department of Health and Human Services and the Justice Department to see how the federal government could ensure that women in Texas have access to safe and legal abortions.

The measure was signed into law by Republican Gov. Greg Abbott in May and took effect early Wednesday morning.

The law was passed amid several other measures to restrict abortion rights that were approved by Republican legislatures across the country. These restrictions came after Justice Amy Coney Barrett, who was nominated by former President Donald Trump after Justice Ruth Bader Ginsburg passed away, joined the Supreme Court.

Barrett's confirmation solidified the high court's conservative majority and made it more likely it would scale back or reverse Roe v. Wade.