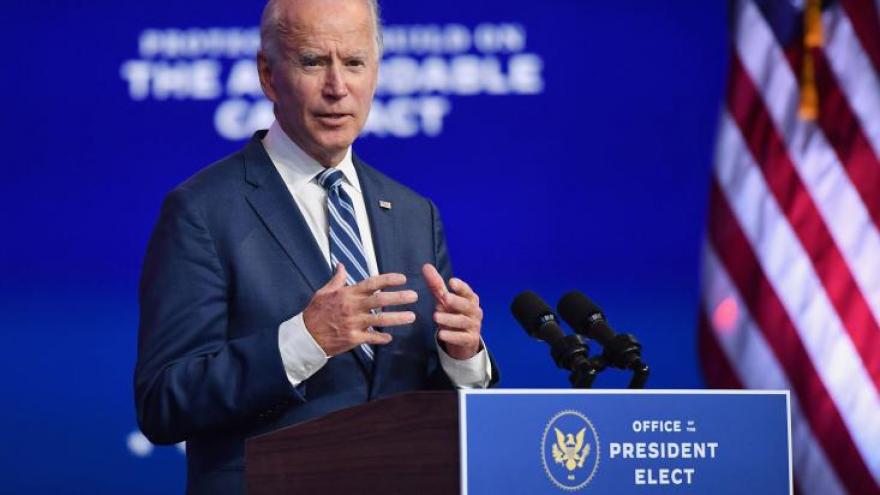 (CNN) -- President-elect Joe Biden on Tuesday said the "darkest days" in the battle against the coronavirus pandemic "are ahead of us, not behind us," and urged Americans to prepare themselves for the struggle.

"One thing I promise you about my leadership during this crisis: I'm going to tell it to you straight. I'm going to tell you the truth. And here's the simple truth: Our darkest days in the battle against Covid are ahead of us, not behind us," Biden said in remarks in Wilmington, Delaware.

"So we need to prepare ourselves, to steel our spines," the President-elect continued. "As frustrating as it is to hear, it's going to take patience, persistence and determination to beat this virus. There will be no time to waste in taking the steps we need to turn this crisis around."

Biden said that in addition to acting swiftly to provide more economic relief and support to Americans, his administration will urgently address the recent massive cyberattack on US companies and federal government agencies.

"There's still so much we don't know, including the full scope of the breach or the extent of the damage it has caused. But we know this much: This attack constitutes a grave risk to our national security," Biden said, in his most extensive comments on the matter to date.

"The Trump administration failed to prioritize cybersecurity," he said. He criticized President Donald Trump for downplaying the cyberattack and contradicting Secretary of State Mike Pompeo's public remarks linking the hack to Russia.

"This assault happened on Donald Trump's watch when he wasn't watching. It's still his responsibility as President to defend American interests for the next four weeks," Biden said.

Biden said Trump's team has not been fully cooperating with his transition team to share information and ensure a smooth handoff between administrations.

"The Defense Department won't even brief us on many things," Biden said.

The President-elect applauded Congress for passing a far-reaching $900 billion Covid relief package on Monday. The legislation aims to accelerate vaccine distribution and deliver much-needed aid to small businesses hit hard by the pandemic, Americans who have lost their jobs and frontline health care workers.

"Like all compromises, it's far from perfect. But it does provide vital relief at a critical moment," Biden said.

Biden said his former 2020 Democratic rival, Sen. Bernie Sanders of Vermont, and Senate Republicans deserved credit for getting the stimulus checks for Americans included in the package.

Biden has said that while immediate funding from Congress is critical, his administration will seek further stimulus.

He said he will also ask Congress to ensure that all Americans who have been unemployed because of the economic upheaval caused by the coronavirus pandemic "continue to be able to live day to day." He said that includes ensuring they don't have food shortages or are evicted from their homes.

Biden said it is critical that small businesses that have been shut because of the pandemic are provided with personal protective equipment and direct payments in order to safely open and keep paying their employees.

The President-elect's remarks come one day after Biden received his first dose of the Pfizer/BioNTech Covid-19 vaccine on live national television and reassured Americans of the vaccine's safety.

"I look forward to the second shot, and I have absolute confidence in the vaccine," Biden said on Tuesday. "But we're in short supply. Taking the vaccine from a vial into the arm of millions of Americans is one of the biggest operational challenges the United States has ever faced."

Health care workers and others have started being administered the two Covid-19 vaccines -- the other developed by Moderna -- that were recently given emergency authorization by the US Food and Drug Administration. More than 319,000 Americans have died from the virus as of Tuesday afternoon.

Biden spoke about how, like many other Americans, he is heeding the advice of public health experts and forgoing holiday traditions.

"Like we did over Thanksgiving, we all have to care enough for each other that we have to stay apart just a little bit longer. I know it's hard," Biden said. Public health experts have advised Americans to not travel or gather in large groups as coronavirus cases spike and the death toll rises across the country.

Biden thanked all of those involved in the development and distribution of coronavirus vaccines, front-line health care workers, and deployed members of the military and their families.

"Our hearts go out to all of you who have fallen on hard times -- through no fault of your own, I might add -- unable to sleep at night, way down with the worry of what tomorrow will bring to you and for your family," he said.

This is expected to be the President-elect's last formal appearance before Christmas, and Biden is planning to remain at his home near Wilmington through the holiday.

The President-elect has moved swiftly to build out his administration, and only has a few spots in his Cabinet left to announce. One of the most high-profile positions in his incoming administration is attorney general, and Biden is no longer expected to make that announcement before Christmas, according to a person familiar with the matter.

Biden was asked by a reporter on Tuesday whether he would consider filing for reelection early next year "to show that you're not going to be a lame duck."