Jackson marks her historic confirmation with a moving speech: 'We've made it. All of us' 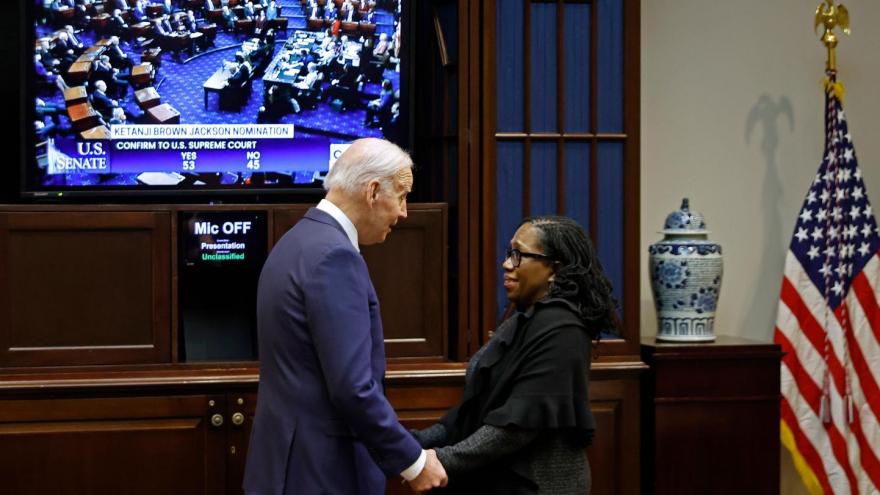 U.S. President Joe Biden congratulates Ketanji Brown Jackson as the U.S. Senate confirms her to be the first Black woman to be a justice on the Supreme Court in the Roosevelt Room at the White House on April 7 in Washington, DC.

(CNN) -- Judge Ketanji Brown Jackson marked her historic confirmation to the Supreme Court with a moving speech from the White House on Friday, in which she celebrated the "hope and promise" of a nation where it was possible for her family to go from living under segregation to a Supreme Court appointment in one generation.

"It has taken 232 years and 115 prior appointments for a Black woman to be selected to serve on the Supreme Court of the United States. But we've made it. We've made it. All of us," Jackson said while standing alongside President Joe Biden and Vice President Kamala Harris.

Jackson continued, "And our children are telling me that they see now more than ever that here in America anything is possible. They also tell me that I am a role model, which I take both as an opportunity and as a huge responsibility."

"I am feeling up to the task, primarily because I know that I am not alone," Jackson said. "I am standing on the shoulders of my own role models, generations of Americans who never had anything close to this kind of opportunity, but who got up every day and went to work believing in the promise of America. Showing others through their determination and, yes, their perseverance that good, good things can be done in this great country."

The judge quoted the late poet Maya Angelou and said, "I do so now while bringing the gifts my ancestors gave. I am the dream and the hope of the slave."

Jackson said her confirmation to the nation's highest court was something "all Americans can take great pride" in, and said the US has "come a long way toward perfecting our union."

He continued, "Nothing to do with me -- we're going to look back and see this as a moment of real change in American history."

The President said, "It is a powerful thing when people can see themselves in others," and added that belief was "one of the reasons I believe so strongly that we needed a court that looks like America."

Biden said Jackson endured "verbal abuse" during her Senate confirmation hearings, and praised her for her "poise and composure" in the face of the attacks from Republicans.

"The anger, the constant interruptions, the most vile, baseless assertions and accusations. In the face of it all, Judge Jackson showed the incredible character and integrity she possesses. Poise. Poise and composure. Patience and restraint. And yes, perseverance, and even joy," Biden said.

Biden thanked the three Republicans who voted with Democrats in favor of Jackon's confirmation — Sens. Susan Collins of Maine, Mitt Romney of Utah and Lisa Murkowski of Alaska. The vote count was 53-47 in the Senate.

"They deserve enormous credit for setting aside partisanship and making a carefully considered judgment based on the judge's character, qualifications and independence," Biden said, naming the three senators.

The vice president said while she was presiding over the Senate confirmation vote on Thursday she drafted a note to her goddaughter.

"I told her that I felt such a deep sense of pride and joy, and about what this moment means for our nation and for her future," Harris said. "And I will tell you, her braids are just a little longer than yours, but as I wrote to her, I told her what I knew this would mean for her life and all that she has in terms of potential."

The Senate on Thursday confirmed Jackson in a vote that paves the way for her to become the first Black woman to serve on the nation's highest court. Jackson's confirmation is a significant bipartisan victory for Democrats that comes at a time when the US faces a number of challenges at home and abroad, including Russia's invasion of Ukraine and sky-high inflation.

One of those challenges -- the Covid-19 pandemic -- loomed over the celebratory event.

Harris was a close contact after her communications director tested positive for Covid-19 this week. A White House official said the vice president would not wear a mask at the outdoor event and would instead remain "distanced" from others.

Current US Centers for Disease Control and Prevention recommendations specify that an individual who is considered to be a close contact with someone who tested positive for Covid-19 should wear a mask around others for 10 days after from the date of the last contact. The guidelines do not say that that person can be mask-less around others if they are practicing social distancing.

The dinner brings together some of the city's most prominent journalists, including from CNN, and the government officials they cover. Attendees had their vaccination status checked, but negative Covid-19 tests were not required to enter.

In September 2020, a White House event where President Donald Trump announced his choice to nominate then-Judge Amy Coney Barrett to the Supreme Court was ultimately labeled by public health experts as a coronavirus superspreader event. At least a dozen people who were at the Rose Garden event -- including Trump -- confirmed they had contracted Covid-19 shortly after their attendance. Vaccinations for Covid-19 were not yet available and would be authorized months later.

At the time, the tightly packed ceremony where public health guidance was flouted and many went maskless and social distancing went largely unobserved underscored the Trump White House's mismanagement of the Covid-19 crisis. Trump had suggested in conversations with advisers that masked and socially distanced events would project weakness against the pandemic and could contradict his claims the outbreak was "rounding the corner."

White House communications director Kate Bedingfield on Friday told CNN's John Berman that the country is in a "very different place" in the pandemic than it was when Trump hosted the White House event for Barrett.

"Certainly we have seen an increase in cases. We know that the BA.2 variant is very transmissible. We are taking many, many precautions. We take precautions to ensure that the President is protected," Bedingfield said on CNN's "New Day."

She continued, "But I do think it is important to note that, you know, it is possible he will test positive for Covid at some point. And we're in a very different place than we were for example when they held that event for Justice Barrett. Which is to say we have vaccines, we have treatments. The President is vaccinated and double boosted, and so protected from severe Covid."

The President on Wednesday interacted with House Speaker Nancy Pelosi, who has since tested positive for Covid-19. The two were seen next to each other at a bill signing event. The White House has said Biden was not considered a close contact of Pelosi. The White House also said the President tested negative Friday morning as part of regularly scheduled testing and that Biden will continue to be tested regularly.

The CDC, which has shifted its guidance on various parts of the pandemic response a few times throughout the last two years, currently says that in general people do not need to wear masks when they are outdoors. The CDC recommends people who are not fully vaccinated wear a mask in crowded outdoor settings or during activities that involve sustained close contact with other people.

Jackson will be officially sworn in to the Supreme Court after Justice Stephen Breyer retires sometime this summer. Until then, she will remain in her current position on the US Court of Appeals, a White House official told CNN.